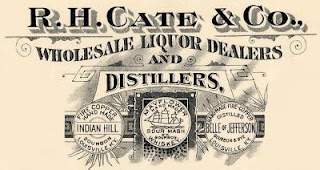 Richard Hamilton Cate, accounted “one of the soundest thinkers” in the whiskey trade, had to be as  nimble as Fred Astaire as he placed and then re-placed his liquor enterprises across Tennessee and Kentucky, as each state by local or statewide action created “dry” zones.  Cate’s fancy steps might be described as “The Prohibition Hop.”

Cate was born in 1863 in Blountville, a small town in extreme northeastern Tennessee and the seat of Sullivan County.   Both parents, Gideon and Mary Cate, were natives of the state and likely hardscrabble farmers.   The son later told a U.S. census taker that he had had only a sixth grade education.  Having gone to work when he was barely in his teens, Cate’s sound thinking could be traced to the “school of hard knocks” rather than book learning.  The 1880 census found Richard living with his parents at age 17, his occupation given as “clerk in store.”

Upon reaching his majority and likely seeking greater opportunities, in the early 1880s Cate moved to Knoxville, about a hundred miles west and south of Blountville.  Not long after he met and married Harriet J. “Hattie” Farrington, the daughter of James and Malinda Laudenback Farrington, an Ohio-born woman some seven years old than Richard.  The couple would know tragedy as their first child, named for his father, and another son, Milton, both died in infancy.

During this period, my assumption is that Cate was working in one of the many liquor establishments operating in Knoxville.  He first surfaced in local business directories in 1897 at the age of 34 engaged as a partner in a liquor business called Housely, Cate & Company, located at 308 Gay South.  By 1900 Housely had departed and Cate had a new partner named Bennett and an address at 302 Gay South.  With in few months Bennett had departed and the name of the business became R.H. Cate & Co. 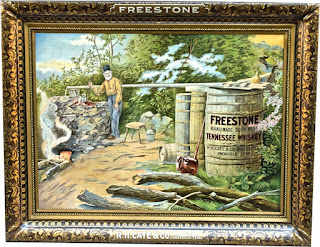 Cate’s initial efforts were as a wholesale liquor dealer who featured a number of proprietary brands, likely “rectified,” — blended and mixed — in his Gay Street facilities.  Like many rectifiers, Cate almost certainly was having trouble getting supplies of raw whiskey for his blending activities.  By 1902, he was claiming ownership of the “Freestone Distillery,” likely his name for a plant  designated in government annuals as RD #100 in Tennessee District 2.  He claimed in ads that this facility was “located in a valley on our farm.  The water we use in distilling is the finest in the world.”  Among Cate’s brands were “Free Stone,”  “Freestone Old Corn” and “Freestone Tennessee” and “Cate’s 1888.” 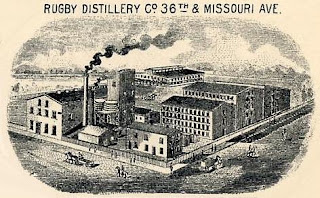 From Kentucky distiller H. A. Thierman, who had trademarked the names in 1902, Cate bought the rights to “Belle of Jefferson,” “Indian Hill” and “Mayflower” whiskeys, likely as part of a investment in all or part of a Louisville distillery (RD #360) that from 1866 to about 1900 bore Thierman’s name.  Subsequently Cate re-named the facility as the Rugby Distillery.  Shown above, this property included four warehouses, all were brick with fireproof metal or slate roofs and had interior heating up to 80 degrees.  The spent mash was being fed to cattle who had a separate barn on the premises.  By 1910 the Rugby Distillery had a mashing capacity of for 1,000 bushels and had added three warehouses with a capacity for 75,000 barrels. 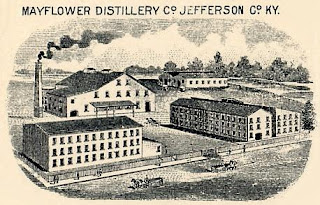 Cate also claimed ownership of another distillery previously held by Thierman. Shown above, this plant was located in Jefferson County, Kentucky and known by various names, including Mayflower Distillery (RD #350). This was a smaller plant, with the distillery itself of frame construction and three brick or iron-clad warehouses with fireproof roofs.  Here too cattle pens were on the site.  Federal records indicate that while Cate might have had important financial interests or contracts with both these distilleries, he was not operating them directly. 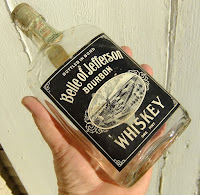 During this period, Cate was marketing his products in glass containers.  Like the Belle of Jefferson flask shown here, those bottles held interesting and well-designed labels and some had highly embossed glass.  Notable were his company’s flasks for Indian Hill Bourbon.  They featured two Native American figures with full feathered headdresses on a pebbled background and the whiskey name.  The lower half of the bottle contained a blank panel for a paper label. 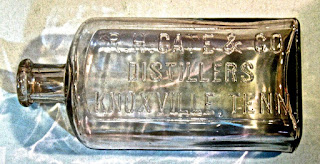 Just as Cate’s Tennessee business was beginning to blossom and assured of a good supply of whiskey for his several brands, his problems began.  In 1904, his wife of 16 years,  Hattie, died.  With her grieving family around her she was interred in the Old Gray Cemetery in Knoxville.  About the same time, that city under local option voted to go dry.   For the first time — but not the last — Cate was faced with shutting down his enterprise or going elsewhere.  He chose the latter, moving his distribution center out of state to “wet” Louisville, nearer both distilleries in which he claimed an interest. Cate located 102 East Main Street, known locally as “Whiskey Row” because of the many liquor industry offices there. 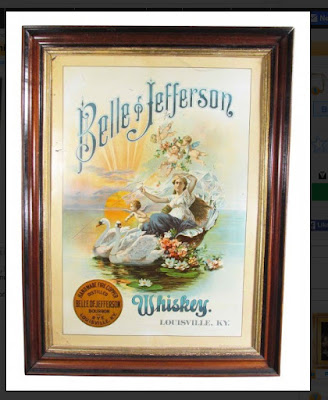 Like many of his neighbors on Main Street, Cate was doing a brisk mail order business, much of it into localities and states that had gone “dry” but could not ban out-of-state express shipments of liquor.   Competing with other mail order liquor firms, he pre-paid express shipments, the smallest order being six quarts, shipped in wooden boxes.  A shipment was available upon payment of $5.00. Cate’s ads assured the public:   “Our whiskies do not contain on drop of spirits or other injurious substances.  They are of delightful flavor, high in food properties and medicinal virtues.”

The transplanted Tennessean seems rapidly to have made his mark in Louisville.  The Wines and Spirits Journal  noted that during his time in the city “Mr. R. H. Cate, the head of the firm, became very popular with his business associates…”  He had taken a lead in the industry efforts to fight off the forces of prohibition, the publication indicated and in so doing “proved himself to be one of the sound thinkers in our trade and demonstrated his willingness to bear his part of the burden in the work necessary for the protection of the trade’s interests.” 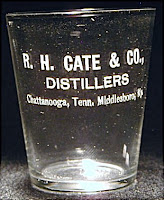 For unexplained reasons, however, in 1908 Cate decided to relocate his operations back to Tennessee, possibly out of loyalty to his home state.  Said to have had faith in the future of the liquor business there he moved to 815 Broad Street in Chattanooga where he already had a branch office.  As Tennessee county by county, town by town, banned alcohol sales Chattanooga had remained a bastion of “wetness.”  Cate issued a shot glass that referenced his new address.

This time Cate decided on a “fail-safe” and opened a second liquor house in Middlesboro, Kentucky.  His faith in his ability to continue to sell whiskey in Tennessee soon proved woefully mistaken.  In 1912 the entire state went “dry” and all those previously displaced whiskey men who had flocked to Chatanooga were forced to shut down. 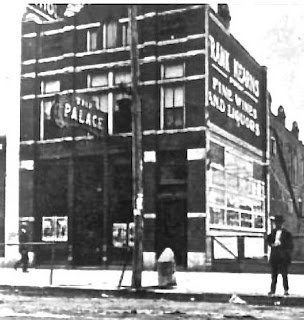 Not willing to quit the whiskey trade, however, Cate once more returned to Kentucky, this time to his Middlesboro outlet.  He likely had selected the town because two of his sons were already there, running a downtown saloon known as “The Palace,” shown here.  A city directory listed the saloon address as also harboring the R.H. Cate Sons Co., retail liquor store, with R. F. and R. H. Cate Jr. as the proprietors.

This Kentucky haven served as a distribution point for Cate whiskey for several years.  But prohibitionist forces also were on the march in Kentucky.  Middesboro  voted to go dry in September 1914.  That spelled the end of the saloons in town and with it the Cates lost a bastion for their liquor businesses.  Passage of the Webb-Kenyon Act about the same time effectively had cut off Cate’s mail order sales.  Moreover, a 1913 flood in Louisville had ruined the Rugby Distillery.   As shown below, two walls of whiskey, aging in barrels, collapsed in the rushing water and the brick walls caved in.  Apparently realizing he was finished in the liquor trade, Cates surrendered to the prohibitionists, and turned to other pursuits. 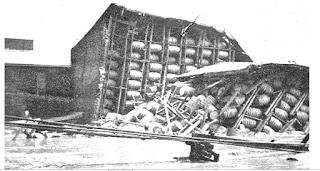 By this time he had married again.  His second wife was Jane Emmons, a Michigan-born woman who was two years younger.  There is no record of children.   With the end of the liquor enterprises, the Cates moved back to Knoxville, where Richard had begun.  He was recorded in the 1920 U.S. census as the proprietor of his own business, selling oil leases.  The next time he appeared in the census, 1940, Cate had given up that pursuit and was running a tourist home with Jane at 609 West Cumberland Street in Knoxville. 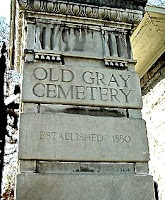 Richard Hamilton Cate died in August 1945 at the age of 82.  Born during the Civil War he passed away just as World War Two was ending.  Like his first wife, Hattie, he was interred in Knoxville’s Old Gray Cemetery.  The Tennessee Index of Deaths and Burial identified him as “hotel manager - retired.”

That designation does not do justice to the career of a man who for more than twenty years kept operating his liquor business in the face of daunting opposition. Demonstrating extraordinary resilience Cate had jumped from Tennessee to Kentucky, from Kentucky back to Tennessee, from Tennessee back to Kentucky, and likely very weary, finally from Kentucky back to Tennessee.  He showed that he was master of the dance I have called “The Prohibition Hop.”  In the end, of course, no amount of fancy footwork could prevent the inevitable.

Posted by Jack Sullivan at 6:01 AM