Bluthenthal & Bickart Battled for their Brands

The pre-Prohibition whiskey trade was rife with examples of trademark infringement but the number of trademark cases actually taken to court within the industry appears to have been exceedingly small.   An exception was the firm of Bluthenthal & Bickart.  Even as they were being forced from their Georgia base before the tide of Prohibition, they headed to the courts to defend their trademarks. 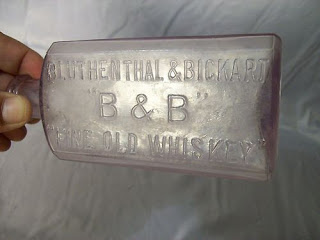 The leader of this liquor business was Aaron Bluthenthal, born in 1856 in Munchweiler, Pfalz, Germany, the son of Absalom and Rebecca Bluthenthal.   About the year 1872, at the age of 16,  Aaron emigrated to the United States.   It appears that he initially settled in Arkansas where a number of Bluthenthal relatives lived.   By the age of 24 he had moved to Atlanta, Georgia.  There he met Monroe L. Bickart, several years his junior, who had been born in Pennsylvania but had married a woman from Georgia and was living in Atlanta.  Not long after Bluthenthal married Bickart’s sister, Francis. They would have two children. 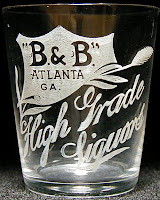 In 1880 Bluthenthal and Bickart established a wholesale liquor firm, located at 42-46  Marietta Street, and later established a second outlet at 17-19 Forsyth Street.  By 1897 they also had created a branch in Cincinnati, Ohio, located at 220 East Front Street.  On their letterhead and in their advertising they also claimed to be proprietors of the Anderson County and W. B. Montgomery Distilleries in Anderson County, Kentucky, and Crystal Springs Distillery in Pickens County, Georgia.  More to the truth, they were purchasing large quantities of raw product from these distilleries and then “rectifying” (blending) it in their own facilities. 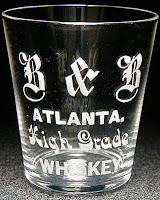 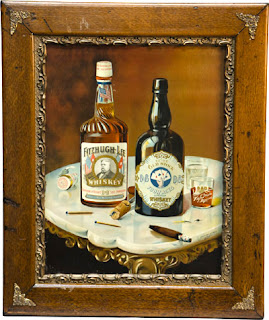 In 1905 Bluthenthal & Bickart brought  a suit in the Florida courts against Theodore Mohlmann, a Jacksonville liquor dealer.  They claimed Mohlmann had violated their trademark on their Old Joe Whiskey, including the size, shape and color of the bottle, a similarly designed and colored label, and the name given the whiskey: “Old Geo.”  The crowning indignity, the plaintiffs said, was Mohlmann copying even the small corkscrew that the Atlanta firm attached to the Old Joe bottle.  The Florida corkscrew was claimed to be identical in “size, shape, quality and appearance.”

A Georgia liquor company attempting to shut down a Florida competitor in Florida courts clearly faced daunting challenges.    When the lower court in Jacksonville denied B&B an injunction and dismissed their case,  B&B appealed to the State Supreme Court.  While that court had some legal quibbles with the initial decision, it did not overturn it.  Mohlmann’s Old Geo remained on the market.

Seemingly undaunted by this setback, the brothers-in-law subsequently pressed similar charges against a Montgomery, Alabama,  liquor dealer named J. W. Epperson. Epperson, like Mohlmann, was aping the Old Joe bottle right down to the corkscrew attached to the neck. He called his booze, “Old Jack.” Once again, Bluthenthal and Bickart found it hard sledding in an out-of-state court.  A Montgomery City Court denied their action for an injunction against Epperson. After B&B appealed the lower court decision, the Alabama Supreme Court  on Dec. 20, 1906, upheld the lower court but went further.  The judges scolded the Georgia partners on the grounds that examination had shown that their Old Joe brand was not as, as advertised, very old stock, fine old whiskey, or even rye whiskey.  B&B had misrepresented the whiskey on their labels and marks with false statements, the judges said, and by so doing had vitiated any trademark protection that the partners might claim.  Although Epperson’s conduct was “without justification,” the Alabama Supreme Court ruled, it was unwilling to  issue an injunction and and make him stop selling Old Jack Rye. 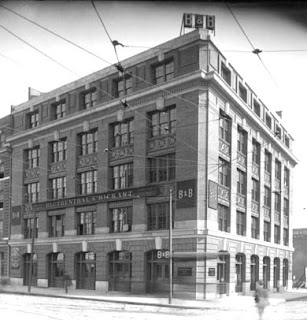 Meanwhile back in Atlanta,  Aaron Bluthenthal was gaining recognition in the business community.  Like his competitors, B&B was issuing giveaway items to favored customers including etched shot glasses and bar signs, advertising house brands like Fitzhugh Lee and Four Aces.  He also was active in civic affairs. In 1905 the Atlanta Constitution carried a story that cited Bluthenthal as part of a small committee of prominent businessmen who were working to bring the Georgia State Fair to Atlanta and who had pledged to guarantee its financial success.

Like elsewhere in the South, however, the drumbeat for statewide Prohibition was growing by the day and in 1908, George went completely “dry.”   B&B had seen this eventuality coming and quickly moved their barrels, bottles and brands to Baltimore, Maryland. They recognized that the environment for prospering was much better in a state and city where whiskey was a way of life. The partners purchased a large building at 301-307 Lombard Street,  shown here, and in 1908 reopened Bluthenthal & Bickart. 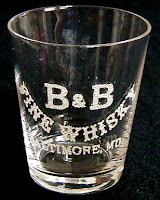 They succeeded in this second effort as they had in Georgia.  One of the factors may have been their continuing generosity to customers with giveaway shot glasses, signs and back of the bar bottles. Mark Rogers Whiskey became a featured brand.  The 1910 census found Aaron Bluthenthal, age 54, living with wife Francis in a high class boarding house on Baltimore’s Eutaw Street.  Monroe Bickart  and his wife also were lodged there. The firm appeared in Baltimore directories at the Lombard Street address until 1919 when National Prohibition was voted. Preceded in death by Francis,  Aaron died in Baltimore in 1941. He was 85 years old.

The Bluthenthal & Bickart story may answer the question of why more infringement cases were not brought by whiskey men whose trademarks had been violated.  Virtually all the violations likely would have occurred in another state where the courts could be partial to their own citizens.  It was an expensive proposition to sue and, as B&B discovered, the results too often were disappointing.   Even more damaging, as done to Bluthenthal & Bickart, was being charged with whiskey fraud by a state supreme court. 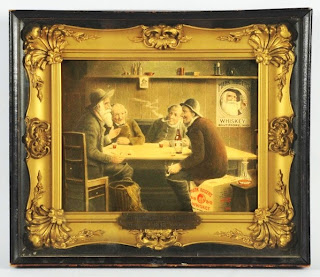