This Monarch Was Acclaimed Whiskey "King" 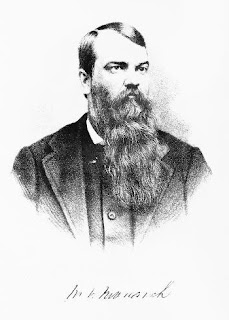 Martin Van Buren (he preferred M.V.)  Monarch built a distilling empire that led him to be acclaimed “King of the whiskey trade in Kentucky.”   Moreover, this Monarch, shown here about age 40, was reputed to be an every inch a exemplary leader: “handsome, courteous, generous, wealthy and honest.”

Monarch was born in Daviess County, Kentucky in 1842.  His parents were Thomas and Susan (Daviess) Monarch They had ten children of whom only six lived to maturity.  Thomas Monarch may have been in the whiskey trade himself;  three of his sons became distillers. Thomas apparently was wealthy enough to send M.V. to private schools in Owensboro and to continue his education well past that of most young men of that time.  The young Monarch in his early 20s attended Cecilian College,  a classical institution of learning in nearby Hardin County.

M.V. entered business life engaged in the tobacco trade for several years until 1867.  That year he began distilling whiskey in a small way in Daviess County, about five miles west of Owensboro, a town of about 15,000, shown here.  At this facility he was able to produce only one barrel a day.   His product apparently was an 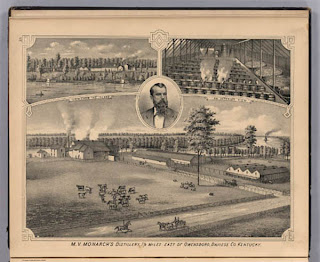 immediate success because by the following year he had erected another distillery about one and one half miles east of Owensboro.  There, initially, he was able to make five barrels of sour mash whiskey a day.

This site proved to be an unusually good natural location for a distillery and the quality of the water with which it was supplied.  The water was obtained from deep wells,  85 feet below the surface and held at a steady temperature of 56 degrees the year around.   It was said to be “clear as crystal” and imparted a flavor that was unique to Kentucky and elsewhere.

In the meantime, Monarch had found time to marry.  His bride was Elizabeth Ann O’Bryan, a native of Meade City, Kentucky, and daughter of William and Mary A. (Vowels) O’Bryan. The Monarchs would go on to have six children, five of whom lived to maturity.  They were Henry, born 1872, Daniel 1874, A. Ermenie 1876, Martin Van Buren Jr. 1878, and Bineta 1881. 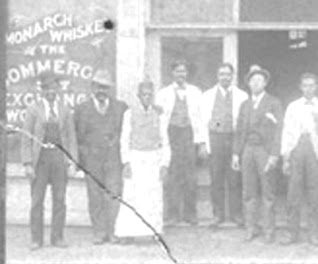 In 1873 tragedy struck Monarch’s enterprise.  That March a distillery boiler exploded and blew parts 200-300 yards into the nearby river.  Two African-American employees were killed.  Undeterred by this setback, M.V. continue to expand his distillery.  By the spring of 1880 he was turning out 20 barrels a day.  He also was feeding the spent mash to a herd of cattle.   Shown above is a contemporary illustration of his operation.

In 1870 Monarch had hired a younger man named Peter (P. E.) Payne, who turned out to be a super salesman for his whiskey.   Payne subsequently married Ann Monarch’s sister,  Mary Ellen O’Bryan, becoming M.V.’s brother-in-law.  In 1880 with Payne as Vice President,  M.V. incorporated as the Sour Mash Distilling Company.   By this time he had gained a national audience for his whiskey,  a result of its quality and Payne’s exertions in merchandising

aided by a team of three or four traveling salesmen.  The company opened offices in New York City and Louisville and maintained agents in Chicago and Dallas.  The Texas Monarch outlet is shown above left.

As the reputation of his whiskey grew, so did Monarch’s standing in Daviess County.  In 1881 he became a director of the First National Bank of Owensboro.  The following year he became a director of a gravel company that had contracts to upgrade the roads all around Owensboro.   A strong Roman Catholic, about this time M.V. founded the city's St. Vincent de Paul Society,  a volunteer organization aimed at assisting the poor of Daviess County

Named after a former Democratic President,  M.V. was an adherent of that political party and in 1882 was elected as a Democrat to be an Owensboro councilman.   Two years later, however, he broke with his party and its candidate,  Grover Cleveland,  and backed the Republican, James G. Blaine.  Cleveland won and Monarch’s political career seemed to end. 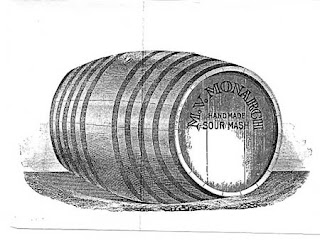 That personal setback for Monarch did not deter the Sour Mash Distilling Company from continuing to grow.  In 1888 Monarch’s firm purchased  purchased other old and well-established Daviess County  distilleries.  They included the E.C. Berry Distillery, founded in 1868, one had an export market;  the John Hanning Distilling Co., established in 1871, with a strong regional reputation, and the Cliff Falls Distillery, established in 1881 in Birk City  on the banks of the Green River by T. J. Monarch,  M.V.’s brother.

According to an 1893 publication,  Monarch and his people found it difficult to handle and sell the product of so many distilleries separately.   As a result in 1890 they incorporated the M.V. Monarch Company, with M.V. as president and Payne once again listed as vice president. This company was formed for the purpose of handling and distributing throughout the United States all the liquor products of the distilleries Monarch now owned.  The move was so successful that three years later Monarch was the largest distributor of sour mash whiskeys in the United States.   It was then M.V. was crowned “King of the whiskey trade in Kentucky.”

The company, as shown here,  advertised its brands vigorously.  They included "Cliff Falls", “Daylight Special,”, "E. C. Berry,” "Eagle," “Jockey Club,” "John Hanning,” "Kentucky Cyclone,” "Kentucky Tip,” "M. V. Monarch,” "Millett,” "Monarch's Maryland Pure Rye,” and "Sovereign."  M.V. Monarch,  as only befitting a king, was the flagship label.  My favorite brand is Kentucky Cyclone.  Reputedly made by a process known only to the distillers, this whiskey was stored in heated warehouses for only four to six months and then sold.  It was said to be “far superior to any other quick-aging goods ever put on the market.”  These whiskeys were sold by the barrel to saloons and in ceramic jugs at retail. 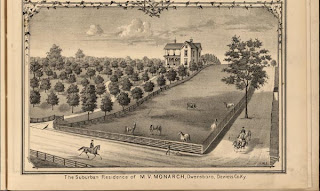 As Monarch grew increasingly wealthy he built a large home, shown right, located not far from his distillery and close to Payne and his wife’s other sister who had married another Monarch brother, Sylvester.  Although the Monarch house was torn down, the Payne home has survived to be part of the National Register of Historical Places.

During his lifetime,  Monarch frequently was extolled.  In 1893 the Pacific Wine & Spirits Review said Monarch “seems to be endowed by 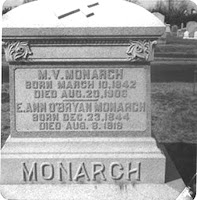 harmony with his mental force...There is neither hypocrisy nor deception about him, nor anything he does.”   Other authors give him similar adulation.   He died in 1906, age 62,  and following a Catholic funeral was buried at Mater Delarosa Cemetery in Owensboro.

His widow, Elizabeth Ann, shown left, lived 13 more years, dying in August 1919.  She was interred beside her husband.  The Monarch liquor interests continued on until the advent of Prohibition.