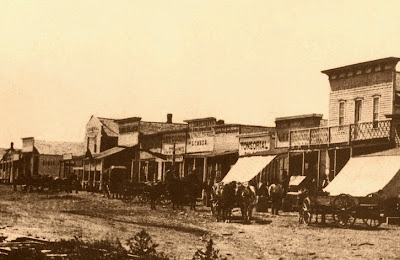 Dodge City, Kansas, above, was known as the roughest, toughest, most lawless town in the West.  It was, that is, until Chalkley McArtor Beeson, shown below, came to run the famous Long Branch Saloon, stayed to help bring law and order, and in the process organize a highly celebrated cowboy band that played at a Presidential inaugural.

Called “Chalk” all his life, Beeson was born in Salem, Ohio, in 1848,  the seventh child of Quakers Samuel and Martha Beeson.  His early career aspiration apparently was to be a musician and it was said of him that he was so talented that he could play any instrument in the orchestra,  In 1868 at the age of 19 he left home and moved to Denver where he found employment driving a stagecoach and working with a group of musicians.  At the same time he was gaining a reputation for his ability with firearms, claiming that he “drank bullets in his coffee for breakfast.” 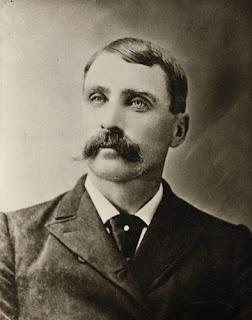 His reputation caused the Grand Duke Alexis to seek him out at a Denver grand ball where the Russian was being honored and Beeson was playing the violin.  The Archduke asked him to guide what became known as the Royal Buffalo Hunt of January 1872.  In addition to the Romanoff imperial party, the hunt included two famous American generals,  Lt. Gen. Phil Sheridan, who had made his name as the fearless leader of the Union cavalry in the Civil War, and Gen. George Custer, who was about to enter his campaign against the Sioux and was killed two years later at the Battle of Little Big Horn.  The hunters encountered thousands of buffalo southeast of Carson, Colorado.  They killed about 200 and the Duke returned to Russia with hides and meat.

By the mid-1870s Beeson had moved near Dodge City, a bought a ranch, and rapidly became wealthy in the cattle business.  In July 1876 he married Ida M. Gause, a woman six years his junior.  They would have three sons, Merritt, born in 1878; Claude in 1881, and Othero in 1890.
Meanwhile Chalk with a partner in 1878 bought what would become one of America’s most famous saloons, The Long Branch, shown here. 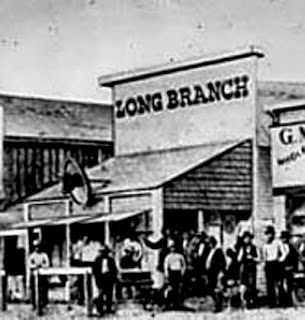 This drinking establishment had been opened in 1873 in Dodge where there were nineteen places licensed to sell drink in a town that numbered only about twelve hundred inhabitants.  Under Beeson’s guidance the saloon sought to distinguish itself by maintaining a “high toned” atmosphere:  No dancing, no encounter rooms with women, and only high-grade liquor served. Patrons also could be served milk, tea, lemonade and sarsaparilla.  The clientele included leading citizens—railroad men, cattle barons, buffalo hunters and travelers.  Even the name “Long Branch” signaled class, taken from a celebrated sporting resort on the Atlantic seaboard. 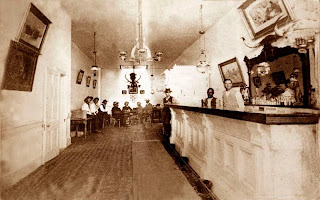 Shown here is the interior of Beeson’s establishment with its carved wooden bar, large mirror topped with the horns of a steer, and vested bartenders.  The walls were covered with paintings, many of them of the typical saloon variety.  Among them is said to be one shown here of two prancing steeds pulling a cart on which a nude woman is reclining.  I believe this art work was the product of A.D.M. Cooper who ranged the West selling his pictures for liquor. 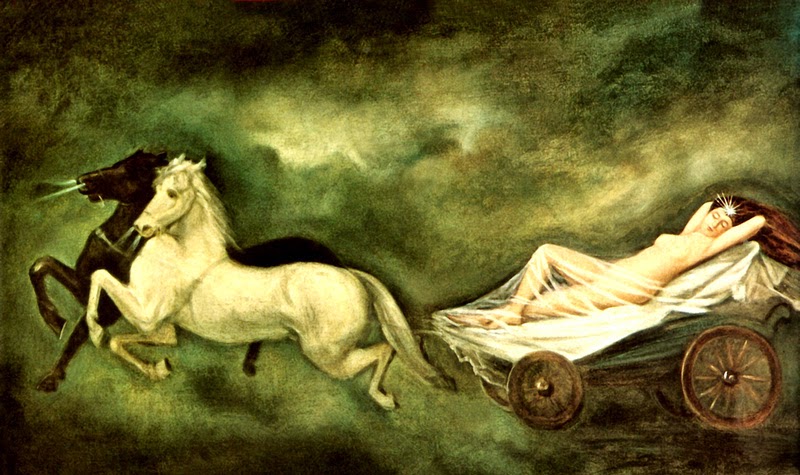 Whiskey was the drink of choice for most in Dodge City, some 300 barrels being consumed annually, it was said.  But as railroad service improved and the town became more prosperous and less rowdy, carloads of beer began arriving from St. Louis and elsewhere, much of it bound for Beeson’s Long Branch Saloon.  In 1879, this facetious note appeared in the Dodge City Times:  “A young lady, Miss An Heuser, is stopping in the city at present.  A great many gentlemen have called on her and express themselves well pleased with her general appearance.  The only criticism we have heard made is that the length of her neck is a little out of proportion to that of her body.”  The vintage bottles of Budweiser shown here give meaning to the story.

The Long Branch is where Chalk became acquainted with noted lawmen, gunmen and even outlaws of the time, men like Wyatt Earp, Doc Holiday, Bill Hickok, and Bat Masterson. Throughout this period Beeson’s reputation as an outstanding citizen — and perhaps a steady gun — had been rising.  He was asked to run for sheriff of Ford County, was elected and served two terms from 1892 to 1896.  Among his accomplishments while serving as sheriff was when he killed a member of the notorious Doolin gang after it had robbed the Spearville Ford County Bank in broad daylight and escaped into Oklahoma Territory.  Without waiting for a posse and almost singlehandedly he tracked one of the bandits to his hideout and in the ensuing melee shot him fatally.  For that act, Beeson collected the rewards offered by the state, banks, the railroads, and the insurance company for apprehending, dead or alive, a member of the Doolin Gang.

The newspapers of his time were high in their praise of Sheriff Beeson  They described him as “a quiet, almost noiseless man” who believed in stopping trouble before it began and yet someone who “always got his man.” “He came to Dodge City when every man carried a gun and the fittest survived,  Beeson survived.  But he is not fierce.” Then the writer added, likely in jest, that Beeson had “not shot a man in several days.”  After his stint as sheriff his fellow citizens elected Chalk to two terms in the Kansas State Legislature where he developed a reputation for avoiding bombastic speeches and working quietly among his colleagues to get things done. 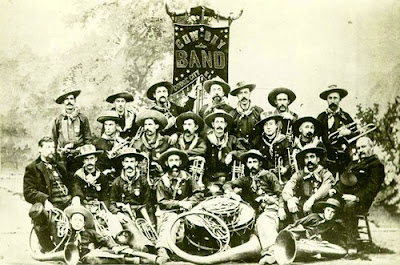 Throughout all this time in Dodge, Beeson had not forgotten his music.  He first created a small orchestra to play at the Long Branch for the clientele as they drank, one in which he played violin.  In 1879 he organized the Dodge City Cow-Boy Band, a brass ensemble of men dressed in cowboy regalia and carrying six guns along with their instruments, as shown below.  Beeson appears to be sitting at the far right.  The band played nightly outside his saloon.  When in the summer of 1882 Beeson’s band received an invitation to enter a competition in Topeka, Dodge City cattle men, merchants and ordinary citizens came forward with funds to outfit the members and defray band travel expenses.  Organizers, however, disqualified the Dodge City musicians on the grounds that they were “professionals.”  But Chalk and his cowboys had the last laugh when the band was invited to Washington, D.C., in 1889 to march and play in the Presidential Inaugural parade for Benjamin Harrison. 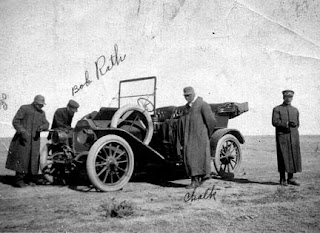 Chalk Beeson has been seen as a transitional figure, living long enough to see the wild West tamed or, as the Kansas City Star put it:  “One may now walk the streets of Dodge City and Abilene, and by exercising reasonable control of his mouth, may get back to the hotel without being carried on a screen door.”  One photo, showing Beeson, center, standing as repairs are made to an early automobile, epitomizes the changing times. The age of horse transportation was ending. 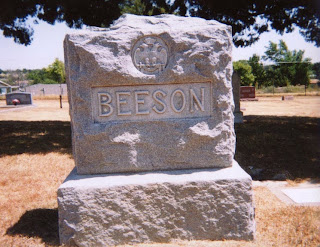 For Beeson, however, perhaps not soon enough.  In August 1912, he was sitting on a horse at his ranch watching a nearby construction crew.  A sudden noise spooked the animal.  It bucked and Chalk was thrown hard against the saddle horn causing internal rupturing. The man who had survived for years amidst the constant dangers of Dodge City could not be saved.  Three days later, Beeson died at the age 64.  His funeral was held at his ranch while his grieving family and many local businessmen, political and civic figures, fraternal society members, and church representatives gathered to pay their last respects to man who, they said, had given so much to Dodge City and Ford County.  Chalk was buried at Maple Grove Cemetery, Ford County, where the family’s monument stands near his headstone.  One observer that day seemed to sum up the stunned feelings of many when he said:  “We just thought that one of Chalk Beeson’s strengths could withstand the worst kind of injury.” 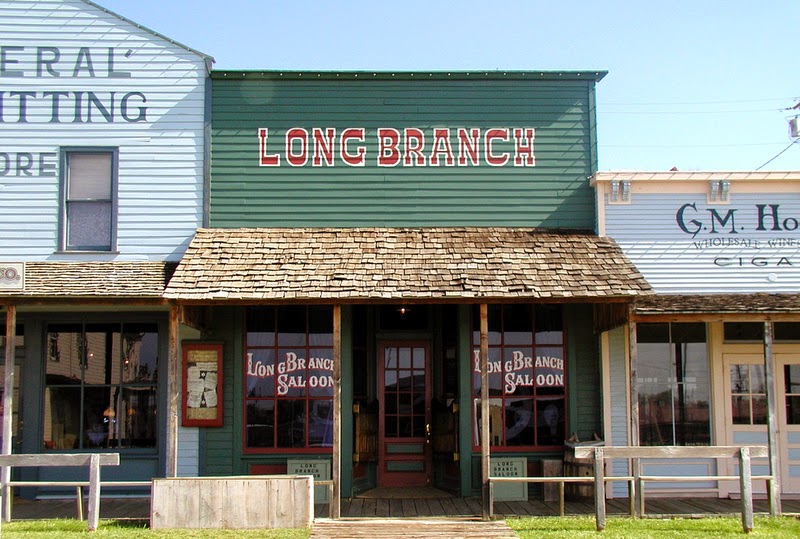 Note:  Beeson sold the Long Branch Saloon in 1883 and it burned in 1885, not to be rebuilt.  A new establishment named Long Branch Saloon was built as part of the Boot Hill Museum entertainment and theme park in Dodge City.  The exterior, shown below, was modeled on photographs of the original building and is furnished with an 1881 bar backed by carved eagles said to have been owned by Chalk.  Oh yes, a Dodge City Cow-Boy Band is part of the entertainment.