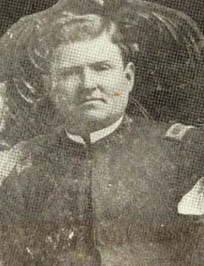 No figure looms larger in the early history of New Mexico than George Curry, a transplant from Louisiana who ran an early saloon in the territory but ultimately became the governor and then a congressman.   Along the way Curry, shown here as a young man, met Billy the Kid, Bat Masterson and other notorious Western figures.  He became a Teddy Roosevelt Rough Rider and later served in the American occupation of the Philippines.

Fortunately Curry described his colorful life in an “as told to” autobiography but it is an account that gave few details about his career as a whiskey man.  His saloon still stands in Lincoln Station, New Mexico, and continues to bear his name.  The story here will recount Curry’s early days and provide details of his rise to political power and influence. 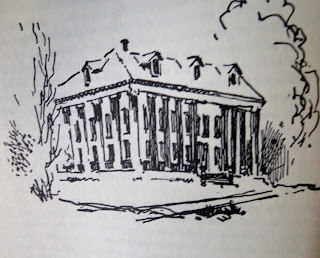 Curry was born in April 1861 at Greenwood Plantation in West Feliciana Parish, Louisiana, the eldest of four sons of George Alexander and Clara Madden Curry.  His father, a Confederate officer, was the manager of Greenwood, shown here in an illustration from the autobiography, and had his own farm nearby.  After the war the senior Curry became an early leader of the Klu Klux Klan and was slain by alleged “carpetbaggers” as George, a boy of nine, looked on. After the father’s death the family moved onto their own farm and “fared very well” for two years.  In the spring of 1873, however, the property was inundated by a massive flood that killed most of the livestock and drove the Curry family off the land. 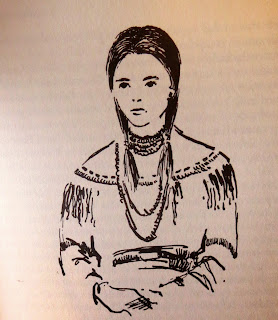 That event sent George Curry off on a journey to a number of Western towns, beginning with Dodge City, Kansas, then to Adobe Walls, Texas, where he met and fought beside Bat Masterson, to beat off a major Indian attack.  By now a mature 13 years of age, Curry accepted an invitation to go to New Mexico with a wagon train.  Returning to Texas later the lad fell in love with a beautiful Indian maid, illustrated in his memoir.  A lass he called “Moon Eyes,” she sickened and died on a trip back to her reservation. Curry reminisced: “Had Moon Eyes lived, it might have changed the course of my life.”
Ever restless, Curry continued to move West. By 1884, at the age of 23, he became engaged in territorial politics as a delegate to a Democratic convention called to nominate a candidate for New Mexico’s delegate to the U.S. Congress and elect delegates to the convention that nominated GroverCleveland.  Once bitten the political “bug” would never leave him. 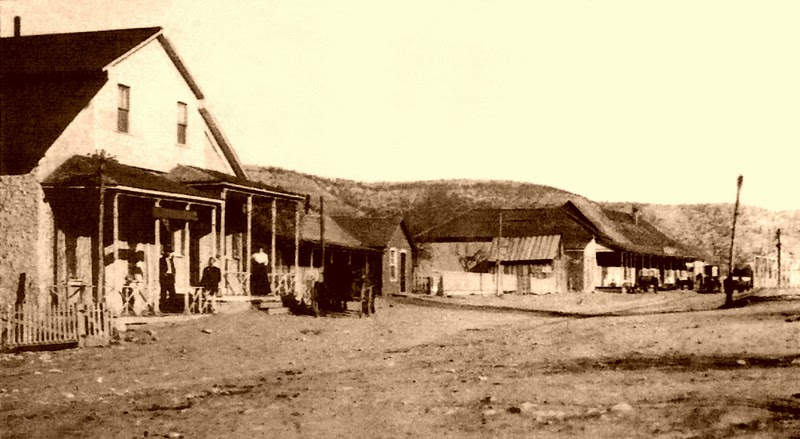 Two years later Curry was in Lincoln Station, part of theNew Mexico Territory, shown here about 1900.  There he was working for a wealthy merchant named Dolan, whose stock included a large stock of hard liquor.  There he met Jack Thornton, a Dolan clerk, who struck out on his own in 1887 and asked Curry to partner with him in a saloon, hotel and livery stable.  Already experienced in Las Vegas, New Mexico, with running a hotel, restaurant and bar, handling as he said, "everything from dishwashing and bookkeeping," Curry agreed and paid his share by borrowing $1,000 from a friend. The resulting establishment, shown below, became known as the Thornton-Curry Saloon and more recently as simply the Curry Saloon.  It is on the National Register ofHistoric Places. 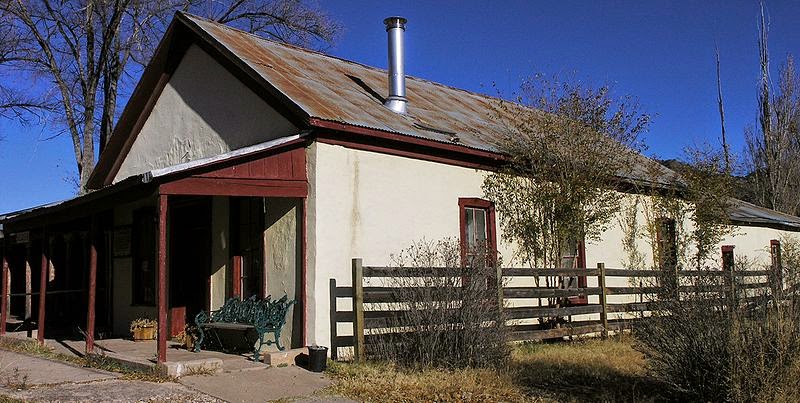 With Thornton running the livery stable and his wife the hotel, managing the saloon apparently became Curry’s principal occupations, although his autobiography is vague on the point.  He reported that the business turned out to be a success.   Lincoln as the county seat was growing rapidly.   The spring and fall terms of the territorial district court brought many transients needing room and board.  Moreover, ranching and mining in the area was prospering.   There was a steady demand for the partners’ whiskey.  A photograph of the interior of the saloon shows the bar and a billiards table.  A sign at the rear says "Club Room," likely the location of the card games.
Despite the prosperity of their enterprise the partners sold out after several years of operation.   The proximate cause was politics.  Some of Curry’s friends had suggested he run for political office and he was interested.  “Thornton was opposed to mixing business with politics, and was probably right,” Curry said. “In July, 1888, we had a satisfactory offer for the hotel and bar and sold out, Thornton retaining the livery stable….”
Curry thereupon began his political career.  The Lincoln County Democrat convention in 1888 was a contentious affair among vying factions.  Although Curry was a popular choice for county clerk, his election was not assured until a number of delegates,including George himself, had adjourned to Mickey Cronin’s bar, and the remaining Democrats unanimously selected him.  This was just the first of many elective and appointed positions he would hold.
That same year George wed Miss Rebecca Hughes, the daughter of a prosperous Lincoln County rancher. They were married in the Catholic church in Lincoln.  He built his bride a three room house in Lincoln and there their first son was born.  They named him Frank Thornton Curry.  He was followed by two more sons, Charles Ernest and George Clifford.
Curry was frequently absent from home.  When the Spanish American War broke out in 1898, the governor of New Mexico was authorized to raise four companies of cavalry.  Curry recruited one company and was appointed its captain. His company, along with other Western recruits became the regiment commanded by Colonel Theodore Roosevelt that became known as the “Rough Riders.”  During the training he became a friend and confidant of Roosevelt but eventually was denied by the flip of a coin the chance to see action in Cuba and participate in the famous charge up San Juan Hill.  Instead he remained in the U.S. to provide logistical support to the Riders.
Almost immediately after the war Curry volunteered to go to the Philippines to help put down a revolt by locals against American occupation following departure of the defeated Spanish.  Concerned about the likely prolonged absence of her husband, Rebecca Curry at that point obtained an uncontested divorce.  George’s success during two years of combat in the Philippines led to his appointment as governor of several provinces and eventually chief of police of Manila. When now President Roosevelt was looking to appoint a governor for New Mexico, he chose Curry who is said to have accepted only upon Roosevelt’s promise to fight for full statehood for New Mexico. 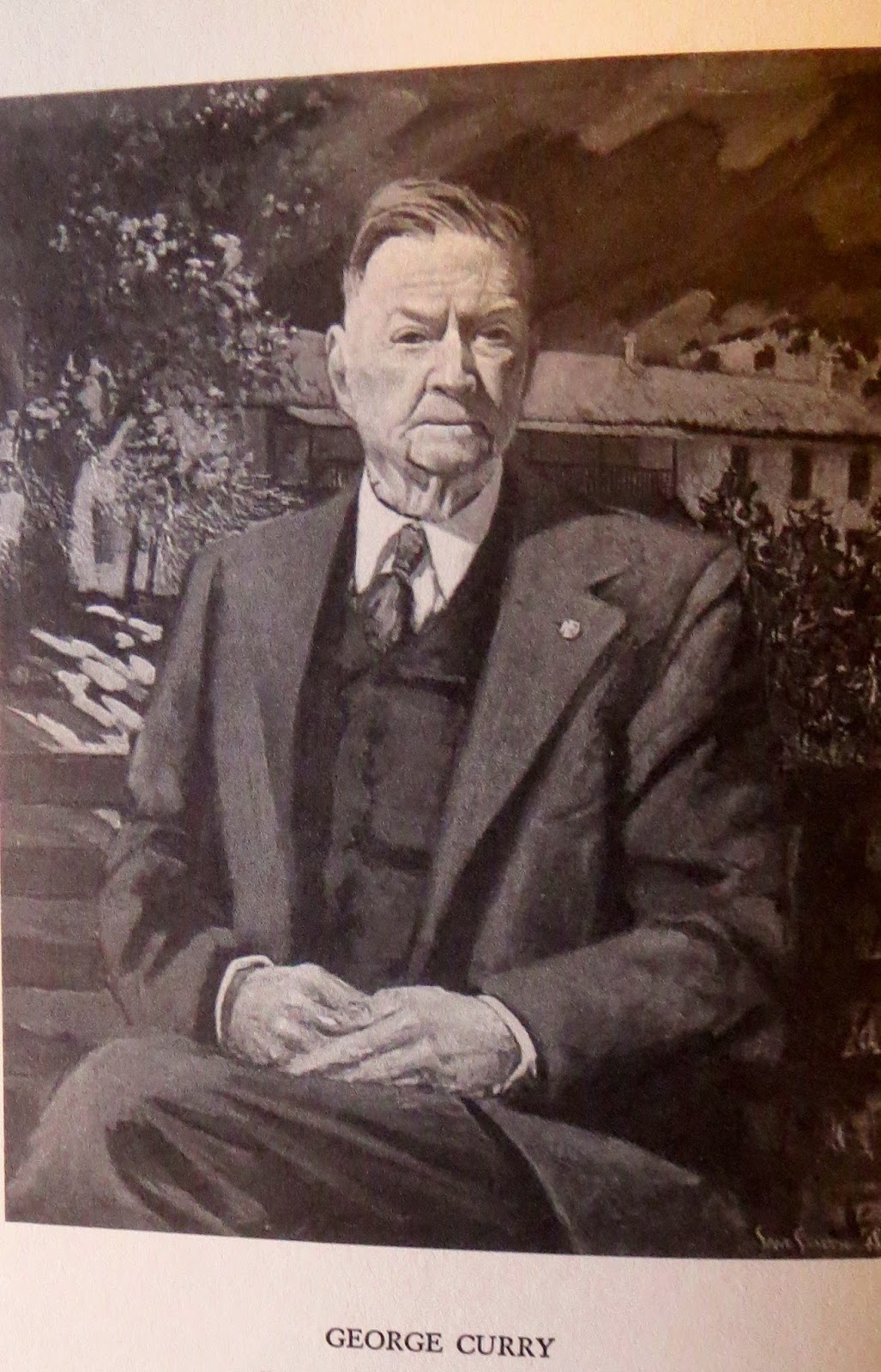 Moving from the Democratic Party to the Republican,  Curry proved to be an effective territorial governor of New Mexico and was able to see statehood achieved in1910, after years of struggle in which he played a major role.  Perhaps out of gratitude for his years of service the people of New Mexico elected him to the U.S. Congress where he served one term.
While Curry’s career in war and politics was marked with success he was less favored in marriage and business.  Married a second time, his new wife found his Western lifestyle too taxing and as George put it:   “We reached an amicable settlement of our affairs and she returned to her home in Pennsylvania.”  One observer has noted that despite Curry’s executive abilities and success in public office, his “adventures in business were for the most part unsuccessful,” but largely because of circumstances beyond his control. 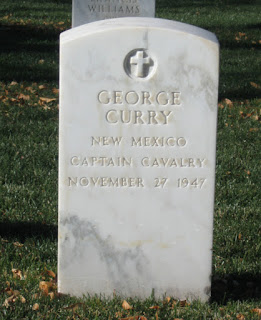 One of those ventures marked a return to the hotel and saloon trade when in 1916 he bought the Park Hotel in Sorocco, New Mexico, a landmark from Territorial days.  While in the process of selling the property in oder to head a potentially lucrative oil enterprise in Venezuela, a drunken patron shattered his ankle with a gunshot, closing that opportunity.  Shown above in his later years Curry in 1945 was appointed State Historian of New Mexico. He died two years later in 1947 at the age of 86.  His tombstone is shown here.


Note:  Much of the information for this post came from the book, George Curry,1861-1947, an Autobiography, published by the University of New Mexico Press in 1958.  The editor was Horace Brand Henning, who knew Curry well and added a foreword.  A paperback reprint was issued in 1995.  The line drawings and portrait of Curry are from the book and by Artist Sam Smith.