The Quirin Brothers and “Geniune” Whiskey in New Hampshire

In 1908 the New Hampshire Board of Health decided to test the content of alcoholic beverages being sold in the state.  Of 301 samples taken and tested by its chemists 244 were of whiskey, including a number of bottles collected from the shelves of a Manchester liquor store run by the Quirin brothers, Eugene and Joseph.  The results were sobering.
The findings of the study supported the contention of a doctor who had reported to federal authorities more than a decade earlier that within New Hampshire “almost all the whiskey and some drugs are adulterated.”  The Board of Health asserted that less than 10% of the whiskeys tested could be classed as “straight” or, in the opinion of Dr. Irving Watson, its director, truly “genuine.”  The other whiskeys were termed either partially or totally “artificial,” among them all the samples obtained from Quirin Brothers.

The brothers had been born in Alsace-Lorraine, France;  Joseph in 1854 and Eugene, shown above, in 1865.  According to census data, both had come to the United States as young men -- Joseph in 1873, Eugene in 1883.  They settled in Manchester, a city with a large and sometimes discriminated-against French-Canadian population.   Eugene was the first of the Quirins to enter the public record, listed in 1892 as a grocer on Manchester’s Main Street at the corner of Marion.  With a partner named Duhaime by 1897 he also was the proprietor of a wholesale and retail liquor store located at 129 & 135 Merrimack.

By 1905, Duhaime had departed and Eugene was joined by brother Joseph in a liquor enterprise they called Quirin Bros., located at 85-89 Manchester Street.  In addition to selling well known brands like “Paul Jones Whiskey,” “Pepper Rye,” “Hunter Rye,” and “Old Baker,”  they marketed their own brand of whiskey, liquor they likely mixed up in a back room.  They sold it in large ceramic jugs both to local saloons and to retail customers.  The Quirins also sold wines, some of them in embossed blob-top bottles, as shown here. 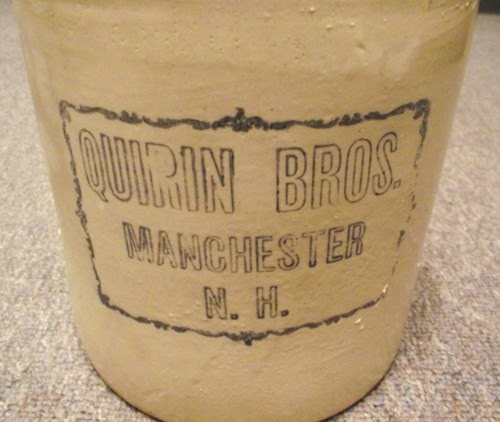 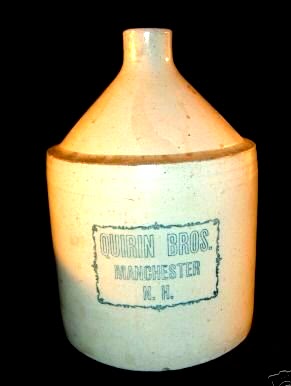 Meanwhile, each of the brothers had wed.  Joseph in 1875 was the first. His wife was Mary Jane, a native of New Hampshire, who was barely out of her teens when they married.  Eugene was married in 1895 to Marie, who like himself was of French parentage and born in France.  The 1910 census found these Quirins with four children in their home, three boys and a girl, ages 14 to 3.

Eugene Quirin appears to have been the more dynamic of the brothers.  He rapidly became a prominent businessman in Manchester with an import business and travel agency in addition to his 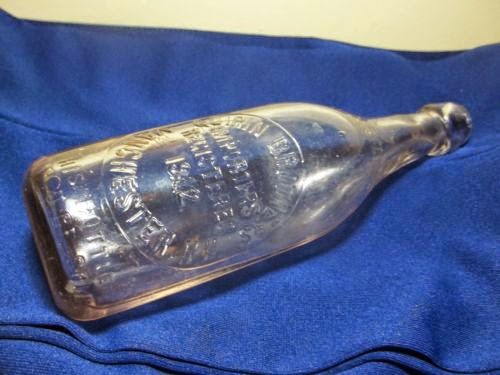 grocery and liquor enterprises.  A member of a variety of social clubs, he also gained a reputation for his local philanthropic efforts.  Active in politics, Eugene was elected as a delegate to the 1904 Republican convention in Chicago. In addition, the younger Quirin was becoming increasingly wealthy.   As an expression of his rise, in 1906 he and Marie bought land on the west side of Manchester, a highly fashionable area of that day, and built an imposing Queen Ann style house, shown here as it currently looks.  Although Joseph was less prominent as a businessman, he appears to have been involved in operating a Manchester shoe store. 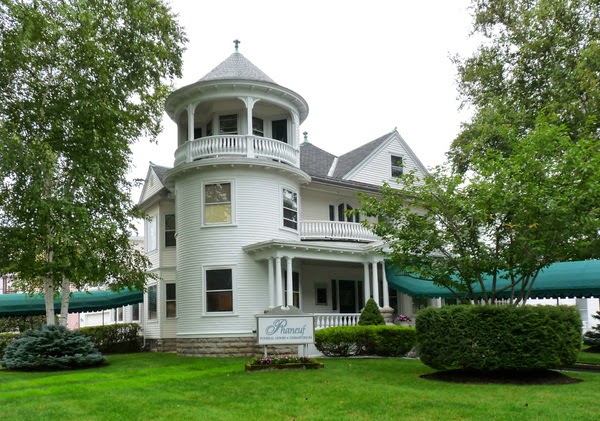 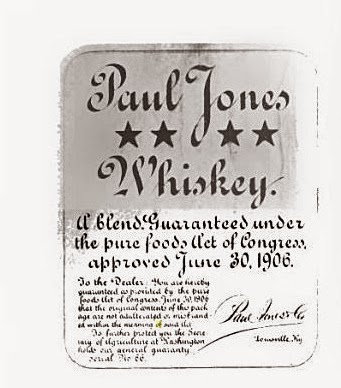 Given the Quirins standing in the community, the verdict of the Board of Health that they were not selling genuine whiskey must have come as exceedingly disturbing news.  The judgment came down particularly hard on the liquor the brothers were selling under their own name in the large jugs.  The Board of Health report branded it as an “imitation,” and “completely artificial,”  maintaining it contained no whiskey whatsoever, although it might have such ingredients as burnt sugar, “beading oil” and tap water.

In what might have been the cruelest cut of all, the Quirins' brand additionally was traduced as being low in alcohol.
Moreover, “Green Valley Club” and “Royal Crown Old Rye” from the brothers’ shelves were cited for being misbranded because they were blends masquerading as straight,” i.e. “genuine” whiskeys.  Even when blends were identified properly the Board of Health took a dim view.  The label of Paul Jones Whiskey obtained from the Quirins was pictured in the report and shown above.  Although the bottle correctly identified its contents, the report still was critical:  “Not infrequently the conspicuous addition of the little word “blend” is made to serve as a license for, and in extension of, the boldest misstatements upon the face of the label.”

Although there is no evidence of fines being levied on the Quirins or other negative effects from the state report, unexplained stresses eventually would end their partnership and each brother went his own way.  The 1914 Manchester business directory listed Eugene as now established under his own name as an “Importer & Wholesale Liquors”  with a store adjacent to his Main Street grocery.   Meanwhile Joseph remained at the old Manchester Street address  and was advertising as “successor to Quirin Brothers.”  He primarily emphasized his establishment as importing wines and brandies and advertised only a single whiskey, “Rosemount.”  That brand was not one singled out by the Board of Health report nor was “Old Home Week Whiskey” for which Joseph issued a shot glass, shown here.

Although both Quirins ultimately were shut down by National Prohibition, they might have had “the last laugh” on New Hampshire authorities. Shown here is a photo taken at a Manchester philanthropic organization designed to aid French-Canadian immigrants.  Eugene Quirin stands second from left.  The man sitting behind the table draped with an American flag is the President of the United States, William Howard Taft.  It was Taft who ultimately settled the issue of the authenticity of whiskey.  Against the recommendations of his staff and a presidential commission, in 1909 he unilaterally decreed that blended whiskeys should be considered just as genuine as straight — a decision that has stood to this day.  Had Eugene Quirin been whispering into the President’s ear? 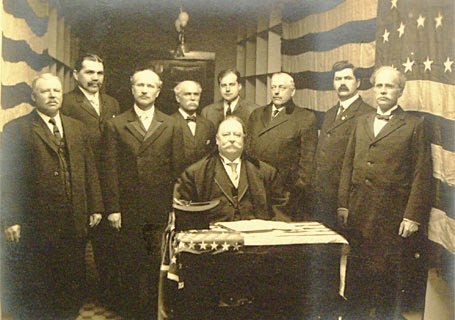 Posted by Jack Sullivan at 6:41 AM