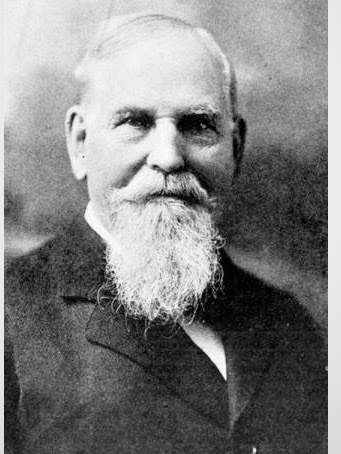 After a young manhood of restless wandering through America, German immigrant, Frederick “Fred” Kiesel, settled in Utah where he became a staunch opponent of religious domination in society and eventually an entrepreneur known throughout the West.  In his wide-ranging career, whiskey was his constant ally.

His willingness to tweak the nose of the religious advocates of prohibition and the Mormon Church was epitomized by an 1909 ad shown below that he placed in a magazine called The Western Monthly.  Claiming that “Uncle Sam Is Our Partner,” Kiesel boasted of being able to reach into “dry” Idaho Counties and other parts of the West where alcoholic beverages had been banned.  He said he was able to supply all demands of the thirsty, including “Ministers, Bootleggers, or even Politicians, from the Governor down to the least official.” 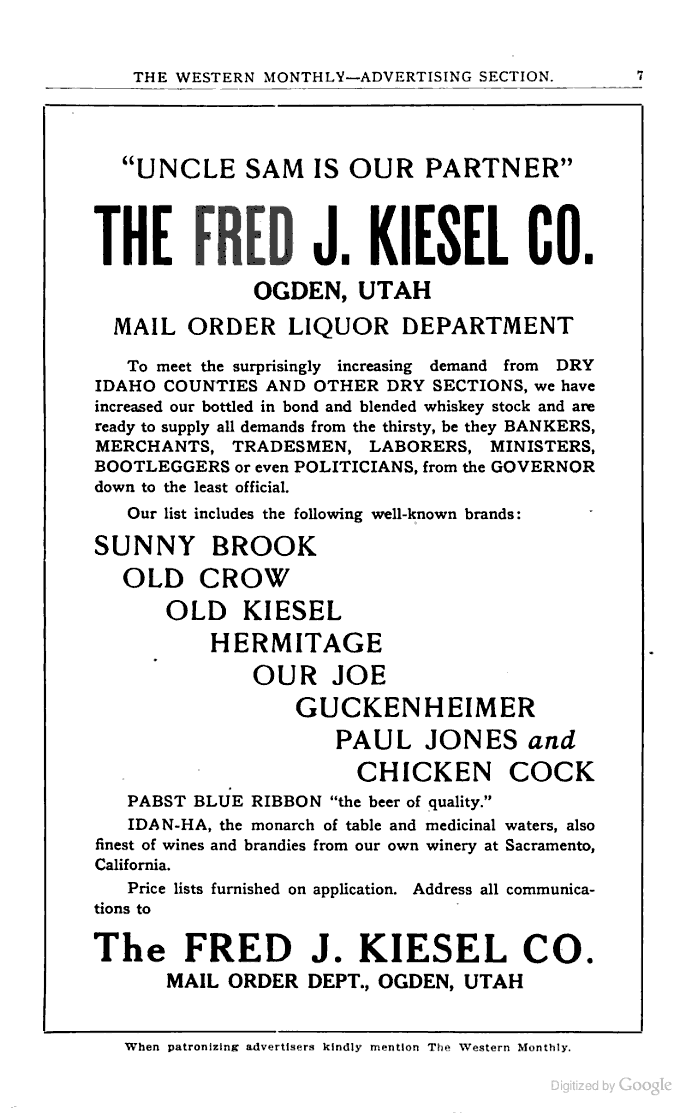 Kiesel had been born in 1841 in Wurtemburg, Germany, the son of an affluent shoe manufacturer and retailer who, ironically as it turned out, sent the boy to school to prepare for a career as a Lutheran minister.  At the age of sixteen in 1857, the youth abandoned his studies and sailed for New York and began an odyssey of wandering around America with stops in New York, Michigan, Ohio and Tennessee.  Kiesel was living in Memphis when the Civil War broke out and spent the next twelve months in the Confederate Army seeing action in in the bloody battle of Shiloh.  Subsequently lured West by friends, his first stop was Salt Lake City where he found work in a general store.  Still restless, business interests, including liquor sales, took him back and forth from Utah to Idaho.

Settling down may have been the result of an 1873 trip back to his native Germany where he met, fell in love with, and married Julia Schausenbach, a woman who at 23 was nine years his junior.  Eventually they would have two children, Fred W., and Wilhelmine, called “Minnie.”.   Julia accompanied Kiesel back to Utah where they settled in Ogden and he with a partner established there the first exclusively wholesale grocery business in the state, a company that featured liquor sales.

Kiesel had returned to find the Utah Territory riven by controversy.  The leader of the Mormons, Brigham Young, opposed mining, particularly for gold and silver, that many people believed was the economic future of the state, and for some was their livelihood.  The issue generated a territorial political organization called the Liberal Party that was opposed to government control by the Mormon Church.  Kiesel became an enthusiastic and vocal member.  Eventually he would become the first Liberal Party mayor of Ogden, serving from 1899 to 1891. 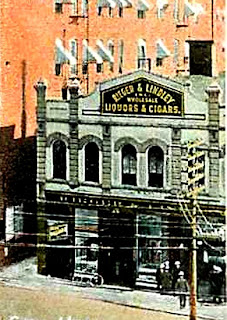 Although he was frequently involved in politics and served a term in the Utah Legislature in 1901-1902,  Kiesel was primarily an entrepreneur.  He incorporated his business in 1887 under the name of Fred J. Kiesel and Company,  of which he was both president and manager.  He had some 15 employees, both clerks and “traveling men” who roamed the mountains west as far as Oregon and Washington.  In time the company’s annual sales climbed to the current equivalent of $17.5 million annually.

Kiesel’s wealth allowed him to invest in other enterprises, including some for which he apparently preferred be semi-anonymous.  In one of his Salt Lake City mercantile companies he had employed two young and talented clerks named F. J Rieger and C.J. Lindley.  Early in the 1900s Kiesel put his money behind their opening a wholesale liquor and cigar store and saloon, shown here, next to a major Salt Lake Hotel called the Cullen.  Located on Second Street South not far from the Mormon Tabernacle, they called it Rieger & Lindley, although Fred Kiesel actually was president of the firm.  A photograph shows the company office with the saloon beyond.  The two figures shown may be those of Rieger and Lindley but are not identified. 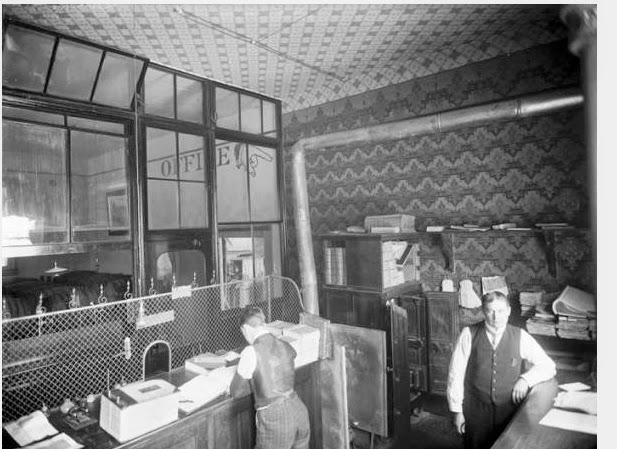 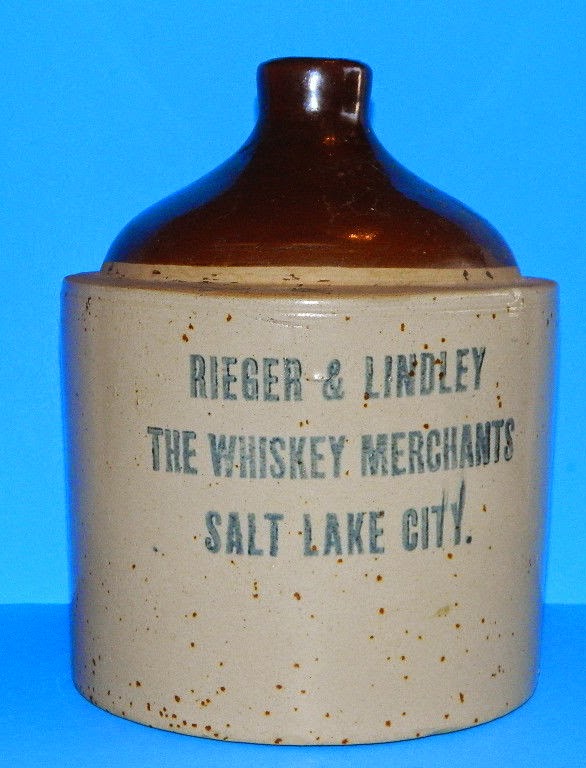 Evidence indicates that these liquor dealers were also “rectifying” whiskey, that is, compounding and blending stocks and issuing the result under their own names and labels.  Their wholesale liquor, sold to saloons and hotels, was sold in large stoneware jugs which might range from one or two gallons upwards with “Rieger & Lindley” strongly stenciled on the front.  For retail sales they packaged their whiskey in glass bottles, often with colorful labels as shown here.  “Cabinet Three Star Whiskey” depicted what appears to be the U.S. President, resembling Theodore Roosevelt, and his cabinet.  Their John C. Fremont brand was named for the famous explorer of the West and first non-native American to climb Pike’s Peak.  Among the Rieger & Lindley brands Fremont Whiskey was the only one whose trademark the company bothered to register.  The company gifted shot glasses for its brands to favored customers.  Shown below are examples advertising “R & S Standard” and “Old Cabinet” whiskies. 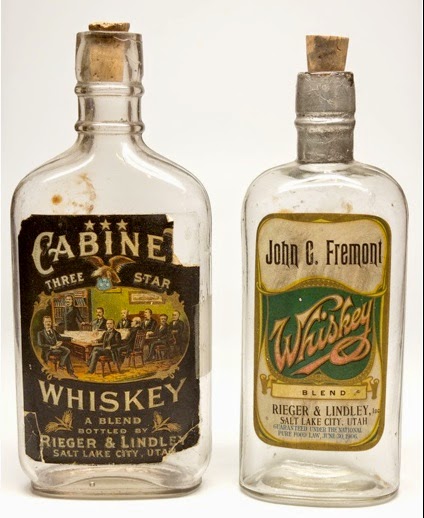 Meanwhile Fred Kiesel was branching off into many directions, according to a biographer.  At Arcadia, Oregon, he had a large stock and fruit farm, comprising 1,000 acres, and a ranch at Palmer, Idaho, where he made a specialty of breeding thoroughbred Hereford cattle and Percheron horses.  He was the president and principal owner of a forwarding business at Ontario, a town in the far eastern part of Oregon, handling a stock of general merchandise.  He owned the second largest vineyard in California, located near Sacramento, where he manufactured Cordova grape wines and brandies.  In Ogden he pioneered the establishment of a sugar factory and was known for large investments in mining and real estate throughout the  West. 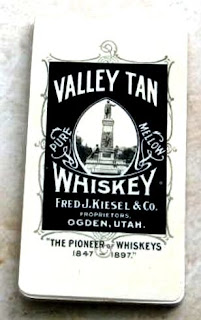 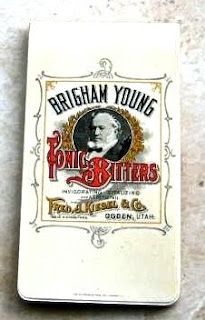 Despite Kiesel’s being identified as opposing church rule in a strongly Mormon state and a major purveyor of liquor in the West, this German immigrant was chosen as a member of the Constitutional Convention when Utah went from territorial status to statehood.  He also was appointed the Commissioner from Utah for the 1893 World Colombian Exposition in Chicago.  He commanded a two and a quarter page biography in a 1900s history of Utah.  Citing railroad and irrigation development Kiesel had championed, the article claimed that he “…has done more perhaps than any other individual person to develop and open up the great northeastern country,”

In 1917 the Utah State Legislature voted to ban liquor sales completely, the 21st state to do so, and the bill was enthusiastically signed by a non-Mormon governor.  F. J. Kiesel Co. of Ogden stopped selling whiskey and Rieger & Lindley shut down. The mail order business had vanished three years earlier when the U.S. Congress passed the Webb-Kenyon Act barring liquor sales from “wet” states to “dry.”

By this time Fred Kiesel was 76 years old and probably resigned about ending his career in liquor, the commodity that had financed so many of his enterprises.  He could also take comfort in the knowledge that he was regarded, as one author put it, “…throughout Utah as a liberal, public-spirited man, ever ready and willing to support movements calculated to promote…welfare and prosperity.”