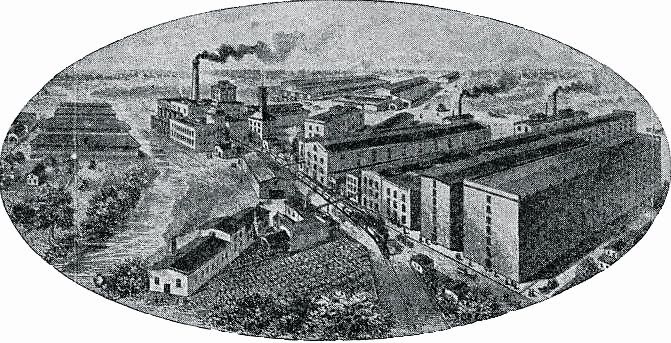 “Today the men who own the distilleries don’t know anything about pride and honor;  they live in New York or Europe, get a report of each day’s run by mail and if the man in charge of the distillery can’t squeeze a full five gallons out of every bushel, he loses his job;  dividends come before quality every time.  The steam yacht and the cottage at Newport have to be kept going…Every extra pint squeezed out of a bushel of grain means so many more champagne suppers and so many more Havana cigars.”

The paragraph above reads as if it came from the screed of a Prohibitionist indicting the whiskey moguls of the time.  Not so. The quote is from a sales flyer from the company of H. W. Huguley, a Boston liquor dealer with a largely mail order business.  After running down the competition  Huguley had this to say about his own enterprise:

“We are sticklers for old fashioned honesty.  We believe people like to see sixteen ounces to the pound and thirty-six inches to the yard.  We may be a little behind the times but we can’t be convinced that the public ‘don’t care a d— for quality.’  On the contrary, we believe that the average man would rather have a straight article than a crooked article any day….”

This self-described pillar of “old fashion honesty,”  was born Harrison Whitfield Huguley in 1845 in Alexandria, Virginia,  the son of George and Sarah Huguley.  Although the Huguley name is said to be of German Swiss origin, the family on both sides had Virginia ties.  The senior Huguley ran a grocery store at the corner of King and Henry Streets in Alexandria.  The U.S. census-taker found the family there in 1850 with nine children, six boys and three girls, ages ranging from two to twenty.  Harrison, whose name was given as “Henry” by the census, was the seventh child.

Alexandria would become a Union focal point during the Civil War.  Invaded and occupied by Federal troops immediately after Virginia formally joined the Confederacy, the city was a military post and supply point for Federal forces.  Although many locals profited from their presence, Southern sympathies were strong in the town.  The Huguleys, however, likely were pro-Union.  Harrison came of age during the conflict but unlike many Alexandria youth did not escape South to join the Confederate Army.  Rather, he is recorded as having spent those years going to school in Washington, D.C., apparently receiving some medical training.

The idea that this native Virginian was a Yankee at heart is reinforced by Huguley’s post-war career.  While still in his early 20s he was hired as a clerk by the military government established in Virginia and elsewhere in the South by President Andrew Johnson.  No such position would have been available to him if his loyalties had been in question, nor would his subsequent employment as a Federal deputy collector of customs and later as a member of the staff of the surgeon general of the U.S. Army.

In 1866 Harrison married Helen C. Todd, called “Nellie.”  She was a New Englander, born in New Hampshire of parents who were originally from Maine.  The Huguleys would have three children, Harry born in 1868;  Alice, 1873; and Arthur, 1882.  Whether it was the desire of his new wife, or hostility from Southerners, or other causes,  Huguley early on decamped for Massachusetts, settling in Boston.   Although he had escaped service during the Civil War, in 1875 he enlisted in the Massachusetts Voluntary Militia with the rank of lieutenant and served a year. 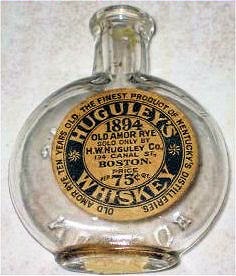 Like many grocers of his time George Huguley had sold whiskey in his Alexandria grocery.  Harrison, apparently having learned the trade from his father, opened his own liquor business in Boston sometime between 1876 and 1880, claiming it had been founded in 1834.  The 1880 census recorded his occupation as “wholesale and retail liquors.”  Along the way he had become close to Benjamin Butler, a former Union general and ardent abolitionist, who was particularly hated in the South and faced hanging if he had been captured during the war.  In the post-war era Butler served as a Massachusetts congressman and in 1883, one term as governor.  As governor Butler appointed Huguley as his aide-de-camp and gave him the rank of “colonel,” a title Harrison would keep for the rest of his life.

When Huguley returned to running his Boston liquor business full time the local whiskey trade was booming.  Maine had barred sales of alcohol completely but it was still possible to send supplies by mail or railroad express into ‘dry” states and localities.  Huguley devoted himself to serving that customer base.  He advertised that express charges would be pre-paid anywhere in New England when money accompanied an order.

H.W. Huguley Co., located at 135 Canal St., Boston, offered customers more than 30 different brands.  His flagship labels were “Amor” and “Myopia Club,”  both trademarked in 1906.  The latter was named for a Massachusetts establishment, founded by four brother with poor eyesight, that many believe was the first country club in America.  Myopia Club was featured on a distinctive label and on Huguley giveaway items such as shot glasses and decks of cards. 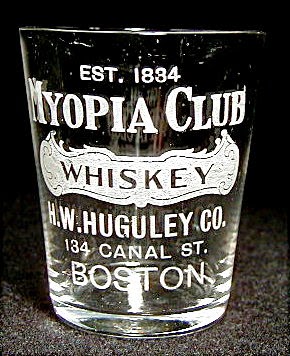 All Huguley’s brands, his literature implied, came from his own distillery:  “We are distillers and operate one of the largest distilleries in the world.  Registered by the U.S. Government.  Distillery No. 13, First District Ohio, capacity over 12,000 gallons per day.  Storage capacity over 15,000 barrels.”  The company ads often showed a picture of the facility, reproduced above to open this article.  There was just one thing wrong:  Huguley did not own or operate this distillery, although he may have received whiskey from it from time to time.  The distillery was owned by Frieberg & Workum , as indicated by the photo below of its workers, an image that identifies it as “Frieberg & Workum Distillery #13, Lynchburg, Ohio.”  Other evidence comes from Federal records showing the nearby Cincinnati firm regularly withdrawing its whiskey from bonded warehouses at the distillery during the period 1898 to 1920.  Ohio historians further have confirmed their ownership. 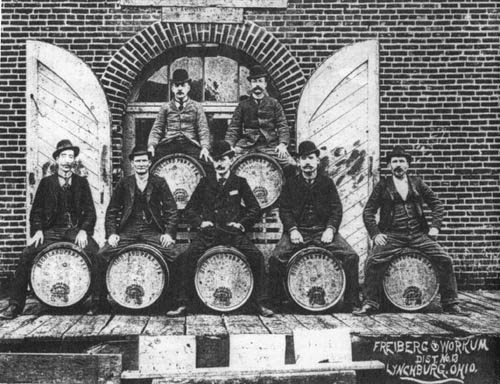 Huguley was, in effect, a “rectifier,” not a distiller.  He was compounding and blending raw whiskeys, slapping on various labels, and selling them, mostly by mail order.  Because, as he boasted, he was not a member of the “Whiskey Trust,” he probably was in a continual scramble to secure supplies anywhere in the country he could find them.  Huguley was no more able to determine that five gallons had not been “squeezed” out of a bushel of grain than guarantee the “purity” of his whiskeys.  So much for Huguley’s “old fashioned honesty.”

In whiskey merchandising “truth” often was a missing element.  Only occasionally did a liquor dealer suffer economically from misrepresentations and even outright lies.  Certainly Harrison Huguley did not.  Despite disparaging the “Newport cottage” he himself owned a Beacon Street mansion in the Back Bay area of Boston and was an active investor in local real estate.  He was a honored member of several bodies of the Masonic Order and the Boston Lodge of Elks.  He also was considered “one of the best known wine importers” of Boston. 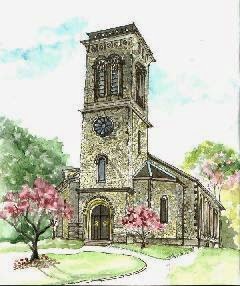 In his late 60s, as his health began to fail, the “Colonel” Huguley with his wife in 1913 embarked on a long, supposedly recuperative, trip to Southern Europe to be followed by one to Latin America.  While in Madrid, Spain, in May, he suffered a stroke and died at the age of 68.  His body was returned to the United States and a funeral held at Sears Chapel, Longwood, Boston, shown here.  The company he had founded carried on until 1916 when the forces of Prohibition, including banning of mail order sales into dry areas, prevailed.

In summary, Harrison Huguley's story suggests that when someone protests his honesty so insistently, it is prudent to count the silverware before he leaves the house.