Whiskey Built Charles Kraemer a DC Mansion on a Hill

When Charles Kraemer emigrated at the age of 12 to the United States, eventually settling in Washington, D.C., he lived with his mother and brothers in a rented row house.  Subsequently his residence was on the top floor of his downtown liquor dealership.  Revenue from selling whiskey in time allowed him to build his own house, a mansion on a hill that subsequently fueled a lawsuit and currently is on the National Register of Historic Places.

Born in Germany in 1854, Kraemer, about the age of 12,  came to America in 1866, just after the end of the Civil War, a conflict that had seen a tremendous growth in the Nation’s Capital.  The 1880 census found him living in a simple residence on Fifth Street, N.W., with his mother, Christeana, and his older brothers, Henry and John.  All the men were working and unmarried while their mother tended the home. Charles’ occupation was given as “clerk in a wine store.” 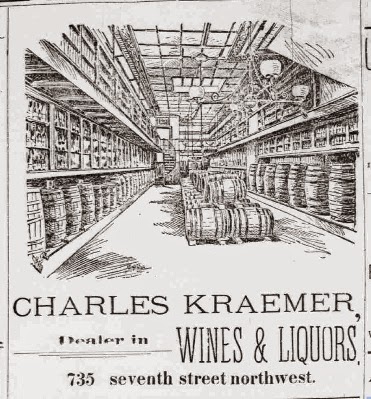 Kraemer was learning the liquor trade during those early years and saving his money.  Striking out on his own sometime around 1895, he established a firm he called Chas. Kraemer Wholesale and Retail Wines & Liquors, located at 735 Seventh Street in downtown Washington.  His business was housed in a four story building, shown here.  It featured a large bay window where his merchandise amply could be displayed.  A 1897 ad in a Washington newspaper provided an illustration of the interior.  Barrel after barrel and a long line of shelved bottles testified to the abundant stock of alcoholic goods Kraemer was offering. 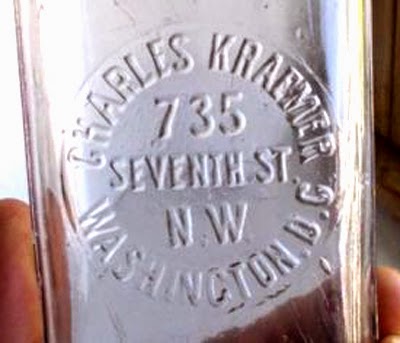 It is likely that one of the upper floors contained a “rectifying” operation, that is, Kraemer was blending and compounding raw whiskies and selling them under his own name and in his own embossed bottles.   His flagship label, likely whipped up on the premises, went by the unusual name of “Fineza,” a brand he registered with the Patent and Trademark Office in 1901.  He advertised Fineza extensively in the Washington press.  It was a rye whiskey, he claimed, eight years old and “absolutely pure.”  Like other liquor dealers of his time, Kraemer championed the medicinal qualities of his whiskey.  In a 1904 ad he claimed endorsements from “leading physicians,” for Fineza, adding:  “In case of sudden illness it’ll prove of great value.”

Another widely advertised Kraemer medicinal was a bottled table water product called “Manitou,” an Indian sounding name that promised that for the stomach it would “expunge the record and renew the vigor.”  Once again said to be physician recommended, Manitou Water, Kraemer advertised, contained “…the best products to act on the stomach, liver, and kidneys.” Water, however, was not the beverage that made Kraemer a success.  Washington has long had a reputation as a “drinking man’s town,” with Congress and Administration officials heightening the demand for liquor.  As a result many establishments like Kraemer’s dotted the DC landscape, creating intense competition.  One way to distinguish a business from the others was to wax lavish gifts upon both wholesale and retail customers.  Charles had learned that lesson well.  Not only did he distribute shot glasses advertising Fineza, but also gave out more expensive items like the metal match safe shown here.  Shaped like a whiskey flask with a screw top, it was made to house wooden matches before the age of the safety match.

While his business grew, Kraemer was having a personal life.  About 1880, he had left his mother and brothers on Fifth Street NW and married a woman named Johanna.  She was six years junior to Charles and, depending on the census, born either in DC or Germany.  The couple would soon have one child, Lillian, born in 1887 in Washington.  The 1900 Census found the Kraemers living in the 735 Seventh Street building, probably on the top floor of the liquor store.  This was not an usual household as many American liquor dealers thought living above their establishment had distinct advantages.  Not only were owners close to their stores for commuting purposes, they could be on alert against break-ins.

Those arrangements often were temporary.  As whiskey men became increasingly wealthy — and perhaps their wives wanting something more elaborate — they often found it expedient too move from above their businesses to a larger residence at a fancier address.  For Kraemer it signaled the opportunity to build himself and his family a mansion.  For the location he selected a location then on the outskirts of Washington called Mount Pleasant. Originally a bucolic country village, by 1900 Mount Pleasant had become a fashionable streetcar suburb.  Choosing a lot on a high hill at 1841 Park Road in 1906, Kraemer engaged a talented architect from a prominent Capitol Hill family named Clement Didden.

Didden & Son designed a frame house for the whiskey dealer that subsequently has been described as: ”The finest of several large   Colonial Revival houses built in the Mount Pleasant area in the early 20th Century.”   One of its most notable features, shown here, was an entrance pavilion surrounded by Ionic Greek pillars and topped by a second floor balcony.  Kraemer clearly found the house much to his liking and spent the rest of his life there.  The 1920 Census found him, his wife and daughter, Lillian, now 23, living there.  Kraemer’s was listed as having no occupation,  his liquor business having been shut down about 1917 when Congress, in a fit  of Prohibitionist fervor, voted to make the District of Columbia “dry.”

Even then Mount Pleasant was changing, becoming more of a working class and immigrant neighborhood.  During the 1920s the all-white Mount Pleasant Citizens Association began promoting a covenant binding homeowners never to sell their houses to “Negroes.”  Charles signed it, seemingly forgetting his own past as an immigrant to America.  When he died he left the house to his only child, by that time married and known as Lillian Kraemer Curry.  With a more enlightened view, in 1950 she sold the house to a prominent black gynecologist.  When the Citizens Association erupted in a firestorm and sued Lillian, the story made newspaper headlines.  Down the road in DC, the U.S. Supreme Court had already declared such covenants unconstitutional and the association lost in District Court.  The gynecologist lived in the house for the next 50 years.

Shown here is a current photograph of the house that Charles Kramer built.  It is on the National Park Service’s roster of historic places for its “architectural and historical” value.  Part of that history is the German immigrant whose success in the liquor trade took him from a row house in the center city, to an apartment atop his business, and finally to one of the grander mansions in Washington. 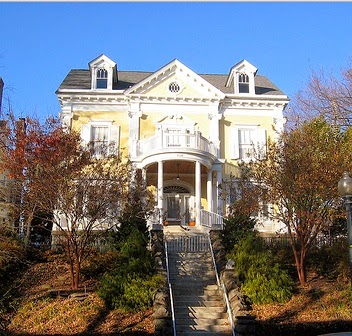