The Grahams: From Reapers to Rye in Rockford

Freeman Graham II and his sons were part of an era in American history, embodied in Thomas Edison, during which a knowledge of how machines worked and the inventive genius to improve them could be a way of upward mobility.   With their technical and executive know-how the Grahams moved from agricultural implements to success in making whiskey in Rockford, Illinois.

Born in Simsbury, Hartford County, Connecticut in 1806,  Freeman Graham was the youngest of ten children of Freeman I and Hannah May Graham.  When the son was only 11 years old his father, age 35, committed suicide, leaving him, his mother and siblings to fend for themselves.  Although the youth received some education, early on he was forced to find employment.  For seven years he was apprenticed as a workman making cotton and woolen machines.  As his skill came to be recognized, Graham began to climb the industrial ladder, working in Litchfield and Hartford, Connecticut.

It was in Hartford that he met and in 1832, at age 26, married Julia Driggs.  She was Connecticut-born of Scotch ancestry, a woman eight years his junior.  They became the parents of seven children, two of whom, girls, died young.  Of the five remaining four were sons, Byron, Freeman III, Julius and David, and a daughter Julia.   Despite his lack of formal education, Graham was beginning to attract notice for his intelligence and judgment.   His neighbors elected him both as  a justice of the peace and to the Connecticut Legislature. 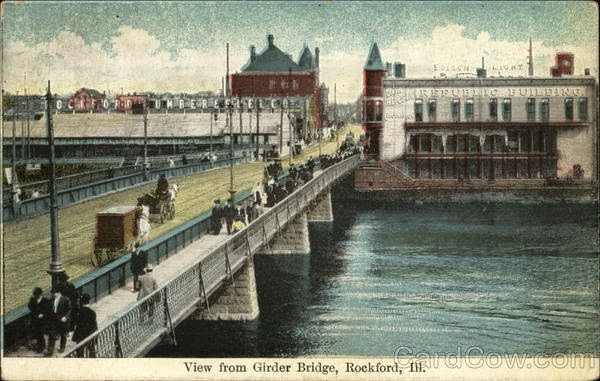 His reputation was also extending beyond New England.  In 1854, the Chicago owner of a large ironworks in Beloit, Wisconsin, asked Graham to take charge of his plant.  By now age 49, Freeman II uprooted his family and moved West.  After about a year in Beloit, he received an offer of a larger salary as the sole manager of Emerson, Talcott & Co. of Rockford.  He accepted and by doing so made a good decision on both a location and a employer. 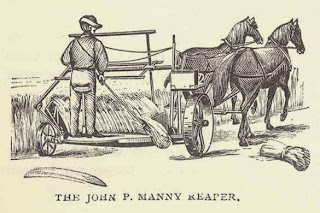 The third largest city in Illinois, Rockford, shown here from the perspective of the Rock River, was booming.  Strategically located between Chicago and Galena and served by multiple railroad lines, the town was experiencing considerable industrial development, notably in heavy machinery, tools, and agricultural equipment.  A major Rockford manufacturer was Emerson, Talcott & Co., manufacturer of the Manny Reaper.  This implement had been developed by John Henry Manny, a young Illinois farmer, who began making them in earnest in 1855, survived a lawsuit from the McCormick Reaper company, and then died of a stomach illness at the age of 30.   The company appears to have reached out to Graham to fill the gap caused by Manny’s death. 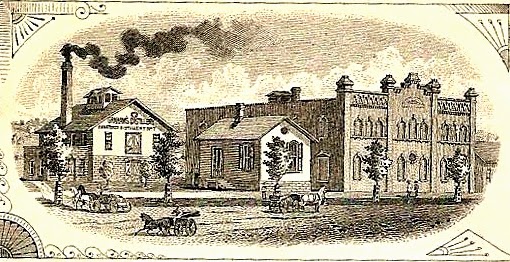 According to a contemporary biography, Graham soon became recognized in Rockville as “an enterprising and progressive business man.”  Principal among his activities was establishing the first distillery in Rockville, which also was the first sour mash whiskey distillery in Illinois. He called called it the Graham Distilling Company.   Shown here is a illustration of the facility.  Smoke pours from a chimney on the distillery building, while the warehouse on right has been constructed to resemble a medieval castle. 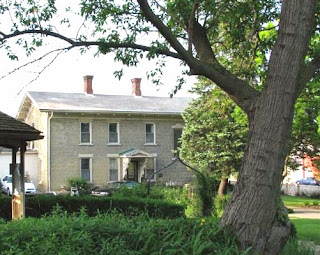 When it came to building a Rockford home for his family about 1857, however, Graham hewed to a more modest New England look.  Shown here, the home is just down the road from the distillery and now on the National Register of Historic Places. Its architecture is described as “Transitional Italianate/Greek Revival style.”

As his sons matured, Freeman II one by one brought them into his enterprises.  In time those would include the Rockford Cotton Mills, described as “a flourishing enterprise.”  That firm manufactured carpet warp, cotton towels, cotton batten and “seamless stockings.”  The Grahams also eventually owned woolen factories and paper mills in Rock Island, Illinois, and Dubuque, Iowa.  Even at age 85, Freeman II was described as still owning the distillery and taking close interest in his family’s enterprises:  “Mr. Graham is quite active, retains the use of his intellectual and physical faculties,  has never used eyeglasses, and retains that sanguine and buoyant spirit characteristic of youth.” 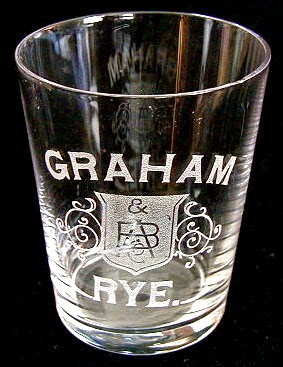 At the age of 90 Freeman Graham died in 1906.  In his will he left his house to his daughter and the distillery to sons Byron, Freeman III and Julius.  Although he had begun his career in the reaper business, Byron Graham was involved with the distillery virtually from its beginning.  He headed its management after his father’s retirement and about 1901 changed the company name to Graham Bros. Distillery.  The market for Graham rye and  sour mash whiskeys continued to grow.  By 1891 the company was grossing the current equivalent of $7.5 million annually and employing 45 workers.   By 1907 Graham Bros. had opened a retail outlet in Chicago.  Like many whiskey men of the time they issued shot glasses to favored customers, such as the one shown here.

By this time Byron Graham, born in 1838, himself was aging.  In 1863 he had married Mary L. Hiatt, a California-born woman who had come to Rockford as a teenager to go to preparatory school.  Closely following her graduation, she wed him. They had two sons, Robert and Harry H. The latter, as he matured, showed a special talent for the liquor business and trained himself in whiskey making.  A 1915 ad for Graham’s Sour Mash, showing a Colonial couple tippling, listed Byron Graham as president of the company and Harry H. as vice president and distiller.  Others of the management team were in Chicago, located in the Marquette Building. 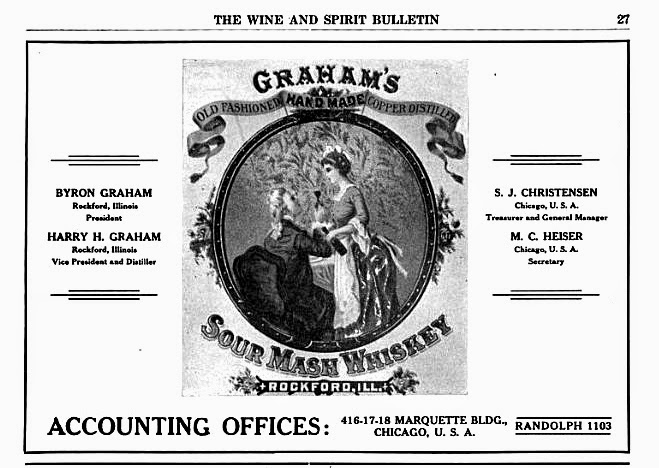 Although other Graham enterprises carried on,  the Graham Bros. Distillery was shut, never to reopen, by the coming of National Prohibition in 1919   Byron died in 1922 and was buried in Rockford’s Greenwood Cemetery not far from his father, mother, and other close family members.  The Graham plot is marked by a large plinth with a cross mounted on a large sphere.  Although the distillery has long vanished from its site, the house that Freeman Graham built and its landscaped garden and grounds are now a Rockford museum and historic landmark.  This landmark continues to testify to the technical skills and entrepreneurial genius of Freeman II and the Grahams.