Henry Toujouse and “The Golden Era of Galveston”

“At the dawn of the 20th century, Galveston was the grandest city in Texas. It could boast the biggest port, the most millionaires, the swankiest mansions, the first telephones and electric lights, and the most exotic bordellos.”   Watching this “Golden Era of Galveston” unfold with appreciation and geniality was a saloon keeper and hotelier named Henry Toujouse. The 20th Century, however, would bring both Galveston’s Golden Era and Toulouse to tragic ends.

Henry Toulouse was born about 1844 in Vic de Bigorra, a small town in the Hautes-Pyrenees department in southwestern France.  His education and early occupation are undocumented but he arrived in the United States in 1872 at the age of 28 and settled almost immediately in Galveston.  He had chosen well.

Galveston was a booming city, the fourth largest municipality in the state of Texas in 1900, and boasted among the highest per capita incomes in the United States.  Its handsome downtown area called “The Strand” was deemed the “Wall Street of the Southwest.’’  Located on a natural harbor along the Gulf of Mexico, Galveston was the center of commerce in Texas and one of busiest ports in America.  The local populace had money and were happy to spend it in the city’s saloons, restaurants, hotels and entertainment venues. 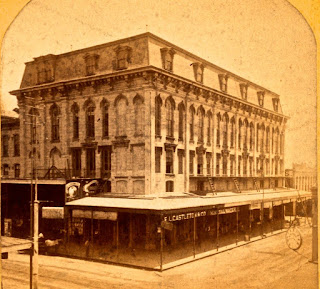 Indicating some experience with the hospitality business in France, Toujouse apparently with ease found work as a bartender a popular local saloon.  Shown here, the Galveston Opera House on Tremont Street was a popular gathering place for residents and the Opera House Saloon at street level did a brisk business.  Soon raised to the position of chief bartender, Toulouse watched from a excellent vantage point as the “Golden Age” unfolded. 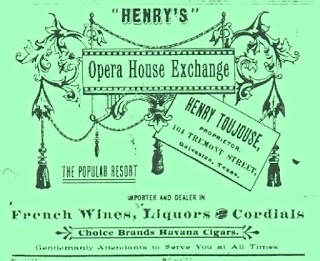 When the original proprietor died, the Frenchman took over the saloon, renaming it “Henry’s Opera House Exchange.”  A gracious and popular host, he rapidly became a well-recognized figure in Galveston.  Meanwhile Toulouse was having a personal life.  In 1881 at the age of 37 he married Frances Susan Blackmore, a woman eleven years younger, who was born in Mississippi.  They apparently would have no children. 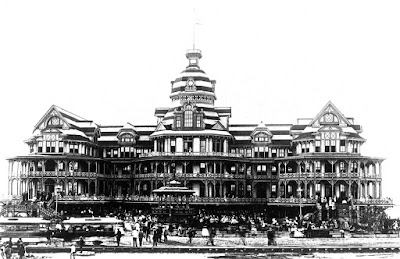 With considerable wealth now at his disposal, Toujouse was a major investor in the construction of a new hotel at the corner of 22nd Street and Avenue Q, facing the Gulf of Mexico and boasting a wide swimming beach.  Shown here, the four and one-half story hotel was built on 300 cedar piles driven into the sand.  The roof featured an octagonal dome containing water tanks and was painted in bright red and white stripes resembling a huge beach umbrella. 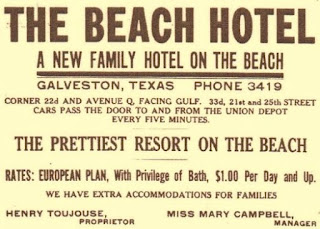 The interior featured electric and gas lighting, grand staircase, ornate dining room, “gentleman’s parlor,” reading room and — of course — a spacious saloon. Named the Beach Hotel, it was advertised by the management as “The Prettiest Resort on the Beach.” Likely because of his Opera House reputation, Toulouse was selected as the proprietor.

The first several years were highly successful for Toulouse and the Beach Hotel, with locals and tourists alike thronging the place to enjoy summer entertainments that included high-wire artists, bands and, after dark, fireworks.  In 1898, however, it was discovered that the Beach Hotel was flushing its raw sewage via an underground pipe into the Gulf of Mexico, not far from its vaunted beaches.  Galveston health officials called the situation “absolutely disgusting and disgraceful” and shut the building down.  Before the problem could be fixed, the Beach Hotel mysteriously burned and was not rebuilt. 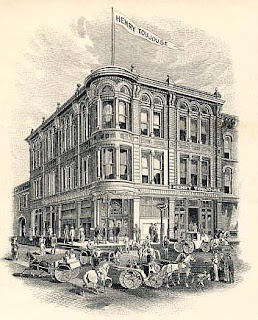 In 1894 the Opera House was sold making it imperative that Toujouse move out of “Henry’s.”  He found a venue immediately across Tremont Street, buying the Stag Hotel, a male-only hostelry, shown here with a banner with his name flying proudly overhead. 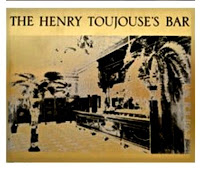 He moved his rosewood bar with its carved panels, shown below and some palm trees into a ground floor saloon.  He issued a trade card to emphasize its tropical ambiance.  At the same time he set up shop in the hotel as a wholesale and retail wine and liquor dealer.  He advertised as the region’s sole agent for “Baker’s Rye Whisky,” “Old Forester,” and “Cascade Sour Mash,” all national brands. 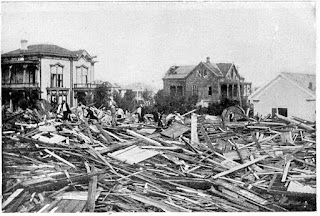 With the dawn of the 20th Century, life in Galveston abruptly was about to change.  In an 1891 article in the Galveston Daily News the city’s weather bureau director Isaac Cline claimed that it would be impossible for a storm of significant strength to strike the island.  Cline was fatally wrong. On September 8, 1900, the “Great Galveston Hurricane” struck.  It was the deadliest natural disaster in American history, killing an estimated 8,000 to 12,000 people, destroying some 7,000 buildings, including 3,636 homes.  Of a population of 38,000 an estimated 10,000 residents were left homeless. The Golden Era of Galveston abruptly ended; the city never fully recovered. 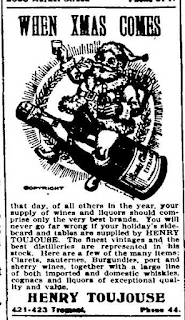 As for Toulouse, while the storm may have damaged the Stag Hotel, he apparently was able to repair it promptly.  Always a believer in newspaper ads, at the holidays in following years he was advertising:  “When Xmas comes, that day of all others in the year, your supply of wines and liquors should comprise only the very best brands. You will never go far wrong if your holiday’s sideboard and tables are supplied by HENRY TOUJOUSE.”  He continued to operate his hotel, saloon and liquor house, apparently with financial success, when in 1913 at the age of 69, he sold the properties and retired. 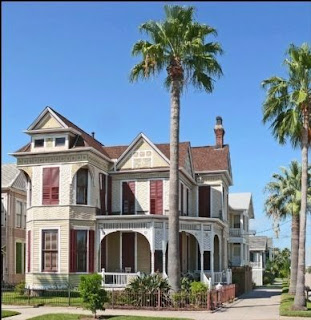 With the proceeds he moved out of quarters in the Stag Hotel and bought one of the finest mansions in Galveston.  Shown here, the Victorian-era house had been designed by local architect William H. Roystone and built in 1888 for a wealthy local real estate executive.  Its elaborate architecture included turned posts, jig-sawn porch balustrades, recurring floral motifs, a prominent chimney, patterned shingles and a cross-gabled roof capped by a widow's walk.  It too apparently had survived the hurricane with minimal damage.

Henry and Frances Susan lived there for the next four years, apparently just the two of them rambling about in the large house.  His wife’s health may have been deteriorating as she aged.  Frances Susan’s death was recorded occurring in July 1917.  She was buried in Galveston’s Lakeview Cemetery.  Having been married to her for 36 years, Toulouse may have found it difficult to adjust to life without her.  Just over two months later, Henry also was dead.  The coroner’s death certificate was short and to the point:  “Cause of death…Gunshot wound in head, self inflected with suicidal intent.”   Henry was buried next his wife in Lakeview Cemetery.

After a life of not only acceptance but of success in his adopted country, the reason for the suicide of Henry Toujouse, the well-liked saloonkeeper and entrepreneur, remains a mystery.  Was it the death of his wife that occasioned it, or some residual sorrow of what had befallen Galveston, or both?  There is no way to know.  So I merely end this post with Henry’s signature, written in his own hand in a happier time.

Note:  This post resulted from a wide number of sources, including Ancestry.com.

Posted by Jack Sullivan at 6:15 AM