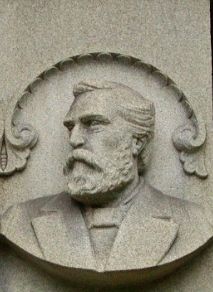 As a center of Germanic culture, Milwaukee for years was known as the “German Athens of North America.”  Steeped in the literature, music and fine arts of his homeland, John Philipp Kissinger contributed to that reputation of the Wisconsin city even as he provided Milwaukeeans with the spirits that enlivened Das Deutsch-Athen Amerikas.  His sculptured likeness is shown here.

J. P. Kissinger was born in 1830 in Selzen, a village situated near the Rhine River in the Grand Duchy of Hesse-Darmstadt, Germany,  His father was a prosperous Lutheran merchant and vintner who assured that his son received a liberal education.  An avid reader growing up, John devoted considerable time to German literature and music.  He also was given an interest in his father’s winery, setting the stage for his subsequent career.

At the age of 24, Kissinger with friends embarked on a sailing vessel for America,  The tedious 58 day crossing the Atlantic had been extended by the quarantine of the ship when cholera was discovered aboard.  Finally disembarking in New York in May 1854, John looked around for a place to settle. Then he heard about Milwaukee.  According to biographer:  “The reports that came to him concerning the prosperity of the city on the western shore of Lake Michigan and of the hospitality and culture of what had then come to be known as the German Athens  impressed him favorably and turned his course in this direction.”

Arriving in Milwaukee in 1854, Kissinger obtained employment in a wine house, working there two years while he perfected his English and saved his money.  Before leaving Germany, John Philipp had married his childhood sweetheart, Elizabeth Duekeret of Hesse-Darmstadt.  He brought her to Milwaukee where she was said, “to preside over his household with the graciousness and helpfulness that have been to him an inspiration.”  The couple would have six children.

Perhaps motivated by his growing family, in 1856 Kissinger established his own small wine and liquor store at the corner of Reed and Lake Streets, soon attracting a patronage of wealthy German businessmen.  Needing more space for his expanding sales, Kissinger moved to larger quarters at 155 Reed Street where he remained until just after the end of the Civil War.  His business having grown considerably during wartime period, he now had sufficient capital to erect his own building at 278-280 East Water Street, a district known for wholesale liquor dealers. 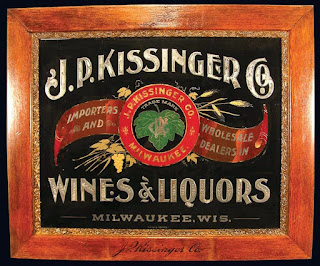 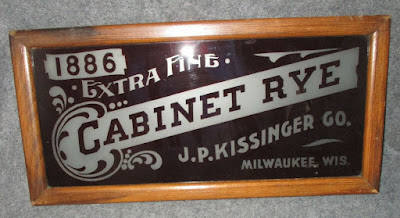 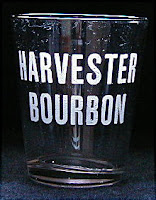 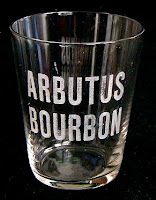 In Milwaukee, the numerous liquor dealers also competed by issuing advertising shot glasses to the saloons, restaurants and hotels featuring their brands.  Kissinger followed suit with an array of his own.  Some showed his trademarked logo, a hops leaf with his monogram imprinted;  others advertised his Arbutus and Harvester bourbons.  Still others simply said “J.P. Kissinger Company Fine Whiskies.” 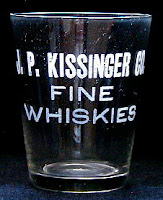 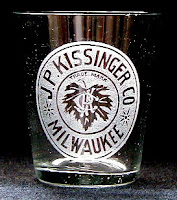 Meanwhile, the German immigrant was branching out in other directions.  After the great Chicago fire of 1871, with partners he established the Riverdale Distilling Company, the largest plant of its kind in Chicago, covering sixteen acres.  The facility distilled and blended whiskey, gin, and other alcoholic products.  The company, of which Kissinger was first president and later a board member, was reported to use up to a million bushels of grain annually and employ one hundred workers. 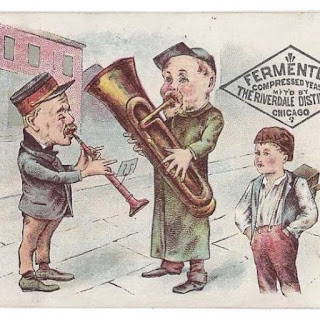 Just as important, Riverdale broke the Fleischmann & Co. monopoly on the production of compressed yeast in America, earning it the plaudits of the anti-trust community.  Its brand was called “Fermentation.”  The central figure in the Riverdale trade card above may be Kissinger.

In other business efforts, Kissinger helped found the Milwaukee Mirror and Art Glass Works, a firm that gained a national reputation for its stained glass windows and likely also was the source of his fancy reverse glass saloon signs. The founder of the Kissinger Mining Company, he also served on the boards of the Milwaukee Mechanics Fire Insurance Company, the Concordia Fire Insurance Company, and the Milwaukee National Bank. Said his biographer: “Great energy, persistence, and inflexible integrity have been the distinguishing characteristics of his business career and he has richly earned recognition as one of the substantial men of Milwaukee.”

Meanwhile, Kissinger was becoming recognized for his contributions to the cultural life in the German Athens of North America.  His biographer reported:  “He is a great lover of music, of all the fine arts, and since his early youth he has been deeply interested in…the promotion of culture and the consequent betterment of mankind.” Kissinger’s primary efforts were expended on the Milwaukee Sangerbund, German singing groups that competed for prizes in song festivals, an organization of which he was a longtime president.   He was widely hailed for his interest and labor on behalf of the organization, resulting in its development and prosperity.  Kissinger’s 1886 company letterhead advertised a “National Sangerfest” to be held in Milwaukee in July. 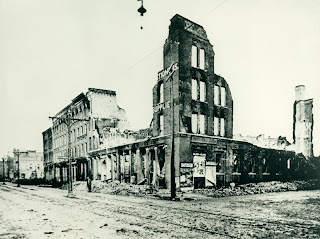 Kissinger’s career in Milwaukee was not without setbacks.  On October 28, 1892, a fire broke out in a warehouse of the Union Oil Company that spread to a nearby furniture factory.  It exploded and high winds threw the flames widely over Milwaukee’s Third Ward.  When finally brought under control, the blaze had wiped out sixteen square blocks, burned 410 buildings, destroyed 215 freight cars and killed five people, injuring dozens and leaving thousands homeless.  Property loss was estimated at $84,500,000. 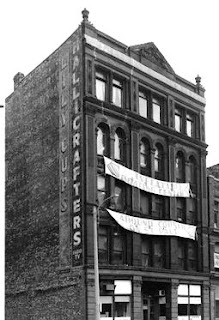 The fire destroyed Kissinger’s Water Street building and consumed his huge stock of wines and liquor.  Undaunted, the Milwaukee entrepreneur within days opened a temporary store.  As the rubble cooled, he announced plans to build anew on the ruined site. By the following year an impressive five-story structure had been erected.  It boasted a symmetrical facade ornamented by pilasters with decorated capitals, window treatments different on each story, garlands on the spandrels, and a cornice with urns at each end.  Shown here at a later day, at the time it was considered one of Milwaukee’s finest buildings.

Kissinger had only a few years left to enjoy his new quarters.  At the age of seventy, he died in December 1900 not long after his wife of 46 years passed away. The J.P. Kissinger Company was carried on until Prohibition by his son, Frederick, whom he had brought into the firms years earlier as secretary and treasurer.

After Lutheran funeral services John Philipp was buried next to Elizabeth in Forest Home Cemetery on Milwaukee’s South Side.  Their children determined that a large monument should be raised to their parents, a tall obelisk in which their portraits would appear in stone.  So it stands today, adjacent to other family graves, a striking reminder of a whiskey distiller and dealer who contributed significantly to the cultural life of Milwaukee and the city’s reputation as “Das Deutsch-Athens Amerikas.” 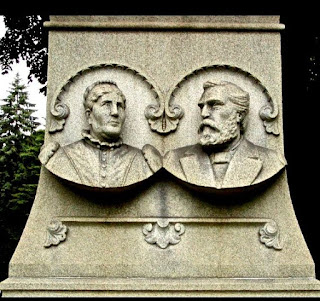 Note:  This post largely is based on a biography of John P. Kissinger from the book, “Milwaukee, A Half Century’s Progress, 1846-1896,”  issued as a souvenir of the city’s golden anniversary by the Consolidated Illustrating Co. of Milwaukee. The author of the biography is not identified.  All quoted sentences in italics are from that source.  Illustrations are from the Internet.

Posted by Jack Sullivan at 7:09 AM