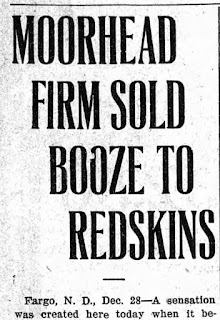 A page one headline in the Bismarck, North Dakota Tribune of December 29, 1907, shouted that a “Moorhead Firm Sold Booze to Indians.”  The story continued that:  “A sensation was created here today…that the head officers of the Pederson Mercantile company, the largest wholesale liquor dealers in northern Minnesota, doing business in Moorhead, Minn., were arrested Thursday by a United States marshal of this city charged…with selling liquor to Indians of the Turtle Mountain reservation.”  Among those arrested was Ralph Pederson, president of the company, a leading Moorhead businessman and city councilman.

The back story of the arrests went well beyond selling whiskey to Native Americans.  It was intimately tied to the radical difference in liquor laws between North Dakota, that had voted itself “dry” in 1890 while Minnesota continued “wet.”  Peterson and his company for years had profited mightily from the disparity.  Prohibitionists in both states must have been seized with glee at the news of Pederson’s arrest.

Born in Norway in 1859, Ralph Pederson had come to the United States in 1869 when he was ten years old, suggesting that he arrived with other family members.  As many Norwegian immigrants did, he gravitated to Minnesota.  There at the age of 23 he married Kjerstine “Kjersti” Enger, a girl of 19 born of Norwegian immigrant parents in Spring Grove, Minnesota. The couple would have three children, the eldest of whom, Peder Pederson, was arrested along with his father.

Pederson founded his liquor house shortly after North Dakota prohibitionists were successful in outlawing liquor sales statewide in 1890.  Thirsty residents simply could cross the Northern Red River into Minnesota.  Sitting just a bridge span from Fargo, the city of Moorhead reaped a bonanza.  “Let the saloons come,”  Moorhead mayor John Erickson crowed: “The more the better it will be for us. They pay more in taxes than anyone else. How many temperance people…pay $500 a year in taxes?” 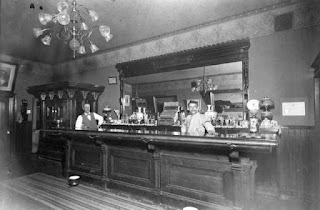 And so the saloons came.  By 1900 Moorhead had 47 drinking establishments and its own brewery for a population of 3,732 people.  According to an article published by the Minnesota Historical Society:  “One in ten Moorhead families gained their income from the alcohol industry….” Shown here is the interior of a typical Moorhead saloon, one of dozens clustered at the riverfront.  From his headquarters at the corner of Front and Fourth Street, shown below, Pederson was prospering by supplying liquor to these drinking establishments. 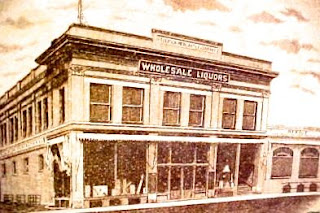 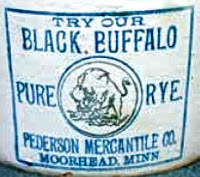 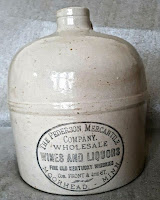 Like other wholesalers, Pederson was generous in his giveaways to the saloons, restaurants and hotels selling his brands over the bar. They included a serving tray advertising his flagship Black Buffalo brand that carried a picture of bridled horses at a watering hole. 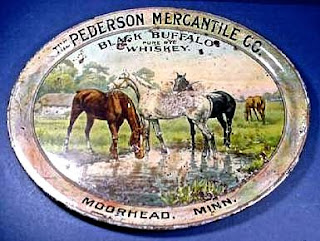 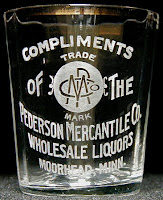 Items like advertising shot glasses and corkscrews also were gifts to mail order and retail customers. Perhaps the most unusual and costly giveaway was a Dresden China plate with a picture of Pederson’s Moorhead headquarters on it. 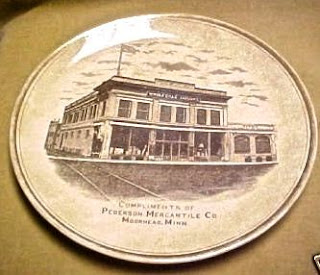 In addition to local sales, Pederson was doing a brisk business shipping his products into North Dakota.  Protected by the Interstate Commerce clause of the Constitution, residents of that state legally could purchase alcohol by mail order from out-of-state businesses like Pederson Mercantile.  As a result every day gallons of his liquor were being dispatched by rail into North Dakota, much to the dismay and anger of local officials.  It may well have been they who tipped off Federal authorities that Pederson had sold liquor to Native Americans at the Turtle Mountain Reservation — a crime.

The lands of the Turtle Mountain people are among the most widely disbursed of all Indian preserves in the United States, spread over 22 counties in three states.  The main reservation is located in Rolette County, North Dakota, a small but highly populated site where Pederson’s whiskey likely was delivered.  The official Government view about selling liquor to Native Americans was expressed in an 1833 report by the Commissioner of Indian Affairs to Congress:   “The proneness of the Indian to the excessive use of ardent spirits with the too great facility of indulging that fatal propensity through the cupidity of our own citizens, not only impedes the progress of civilization, but tends inevitably to the degradation, misery, and extinction of the aboriginal race.”

Indicted by a Federal grand jury, Pederson, his son as the company secretary, and the company treasurer were arraigned before a U.S. Commissioner in Moorhead on twelve counts.  The trio made bail and awaited their appearance in court.  Commented the Bismarck newspaper:  “On account of the prominency of the parties the case will be watched with interest and promises to be a desperately fought legal battle.”

In actuality, the trial appears to have ended with at most a slap on the wrist for the Pedersons.  As one observer put it:  “Getting juries to convict was also a problem.  The seller of liquor was often a reputable businessman in the community.  Regardless of what the law said about the competency of Indians as witnesses, prosecutors did not want to bring an action against a local businessman on the word of an Indian,”  Even when convicted, the guilty parties faced small fines and served little, if any, jail time.

Even though I have not found the final verdict in their case, Pederson and his company seems hardly to have suffered, continuing to sell alcohol locally and by mail order throughout this period and afterwards.  Pederson’s “comeuppance” arrived in 1915 when Minnesota, beset by the same prohibitionary forces that earlier had dried up North Dakota, voted to ban alcohol.  After getting rich on liquor sales for the greater part of 25 years, Pederson Mercantile turned to selling other products. 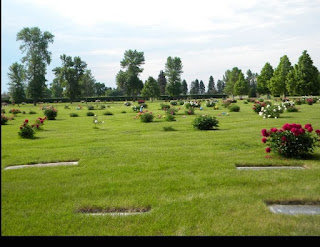 Ralph Pederson did not live long enough to see the repeal of National Prohibition and the restoration of whiskey sales in Minnesota, dying at the age of 69 in 1928.  He was buried in Moorhead’s Riverside Cemetery, shown here.  In ensuing years the Federal ban on selling alcohol to Native Americans has been discarded in favor of allowing each tribe make the decision on its own. Turtle Mountain Indians currently allow the sale of beer and other alcoholic beverages on the reservation, following a process of licensing by the Tribal Council.

Notes:  This post has been drawn from a variety of sources.  Two key ones are the cited news story from the Bismarck Tribune and an Internet article (undated, unsigned) from the Minnesota Historical Society.  The photo of the Moorhead saloon is also from that site.

Posted by Jack Sullivan at 6:52 AM