The Aratas Left Their Mark on Oregon

It might surprise residents of the Portland metropolitan area to learn that the familiar names of Arata Road, Arata Creek, Arata Station and Arata Creek School memorialize an Italian immigrant family who came to prominence in Oregon by selling liquor — lots of it.

The Aratas likely originated from the Piedmont Region in the northwest of Italy where the name is a familiar one, derived from “plow.”  Born in 1854 and after spending his early years in Italy, Guiseppe Arata was the first to emigrate to the United States, settling in Portland in 1883.  He was followed by two younger brothers four years later.  They were Francesco Giovanni Arata, born in 1862, and also known as “F.G.” and “John,” and Stephano Angelo, born in 1865, and also known as “S.A.” and “Angelo.”

In 1891, eight years after arriving and likely after serving a period learning the liquor trade, Guiseppe opened his first establishment, a joint saloon and package store.  His first location was at 267 First Street in Portland, moving as he succeeded to a larger venue at 232-234 First. As shown on a letterhead from the 1880s, he called his business “G. Arata & Co., Importers and Wholesale Wine and Liquor Dealers.”

Both younger brothers appear to have worked for Guiseppe for a time, later branching out on their own in the late 1890s with a local partner in a liquor establishment known as Arata, Donahue & Company.  With the departure of Donahue several years later, the firm came to be known as S.A. Arata and later Arata Brothers, with Stephano as president and Franco as manager/partner. 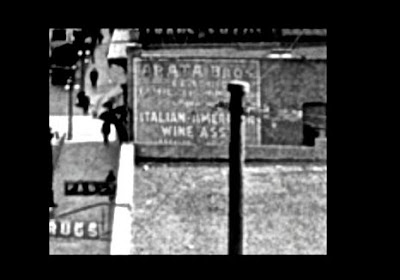 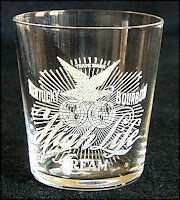 Indicating their success, those Aratas ran joint saloon and liquor stores at three locations, 104 and 831/2 Third Street and 264 First St.  The businesses were highly successful and Arata Brothers Co. became accounted as the largest liquor distributor in Oregon.  The company advertised widely on Portland billboards and through giveaways like shot glasses for their flagship brand “High Life Cream” Kentucky bourbon.

The 1895 Oregon census found all three brothers, still bachelors living with their younger half-sister, Mary Arata, at 170 Thirteen Street.  That status would not last.  The next year, Francesco married Anna, a woman of Italian ancestry.  They would have eight children.  A year later Stephano, 30, married Bessie, 18.  They apparently had no children.

Stephano made the choice to locate just outside of the Portland city limits.  Whether it was a desire to create his own home with Bessie away from family or to find a landscape similar to the Italian Piedmont or yet another reason, Stephano’s move would perpetuate the Arata name.  He relocated to Wood Village, shown here, a town on the easterly edge of the Portland Metropolitan area that calls itself “the portal to the region.”  A community publicity blurb proclaims:  “Wood Village is literally at the edge of the Columbia River gorge….And make your base camp for journeys on the scenic Mt. Hood Highway or on the Historic Columbia River Highway.” 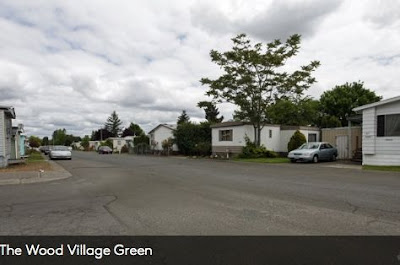 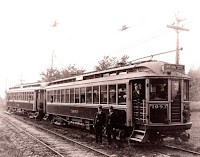 Purchasing a thirty-year-old estate with his liquor profits, Stephano in 1907 renovated the house, added pillars and “other frills,” electrified the property, and planted fields of oats and vineyards to create an impressive country home.  The estate would become a stop for an electric interurban railway and was known as Arata Station.

Stephano was elected an early mayor of Wood Village. Apparently he served with sufficient reputation that a main thoroughfare was named Arata Road and a nearby stream, Arata Creek, the latter shown here on a map. 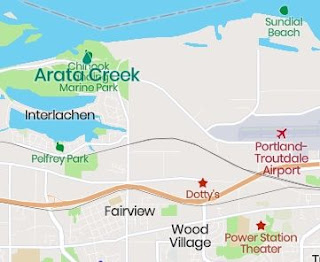 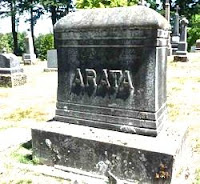 Meanwhile back in Portland the family was changing.  In 1905 Guiseppe Arata, only 51 years old, died and was buried in Portland’s Mt. Calvary Cemetery.  His grave monument is shown here.  Other family members had left Italy and joined the Portland Aratas, including Charles, a brother-in-law later married to Mary Arata, and N. Louis, a younger half-brother.  Both men worked as a bartenders and clerks for Arata Bros. 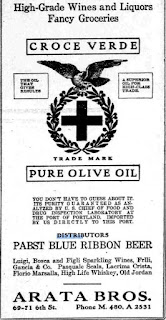 Stephano and Franco had noted the prohibitionary sentiment growing in Oregon.  Their ads, while continuing to tout wines and liquors, increasingly emphasized high grade olive oil and other “fancy groceries.”  When the state voted itself “dry” in 1916, the Aratas were able to continue successfully in business for decades as grocers.

Stephano died in 1848 at the age of 83-84, and was buried at Mt. Calvary.  His gravestone is shown here. The company survived into the 1950s, located at 227 SW 6th Street, in a structure known as the Arata Building.  Francesco continued to be listed as the proprietor, dying in 1957 at the age of 97. 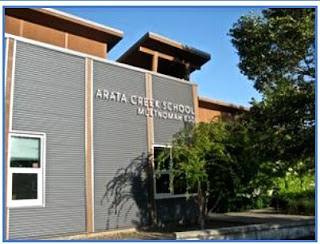 The saga of the immigrant Italian family who found prosperity in America by selling liquor in Portland, Oregon, does not end there.  In recent years a school has been erected in Multomah County devoted to children with learning disabilities.  It is called Arata Creek School.  And thus the name continues to be carried forward.

Notes:  This post was created from a large number of sources.  An important one came from Robin Preston’s “Pre-Pro” website where he includes an account of the Aratas based on family history provided by an unnamed great-granddaughter of Francesco Arata.