Whiskey Men and the 1918 Flu Epidemic

Foreword:  The confluence of the coronavirus outbreak with the war movie “1917”  has recalled for me the 1918 Spanish flu epidemic, considered the most deadly in history.  An estimated 500 million people worldwide got sick and some 50 million are believed to have died, including 675,000 Americans.  My father, a pilot in training during World War One, while stationed in Texas fell victim but recovered.  This post is devoted to whiskey men of note who were not so fortunate. 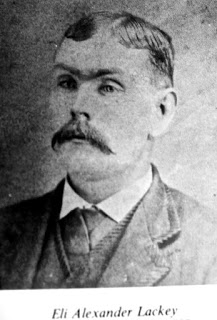 A regional history, commenting on a North Carolina town adjacent to the South Carolina line, concluded:  “In a manner of speaking, much of early Hamlet was built on money from liquor production…The Lackey liquor fortune….”   Indeed, the day in 1890 when Eli Alexander Lackey settled in Hamlet made possible the day in 1917 when the famous tenor Enrico Caruso sang in the city’s Opera House.

A highly successful distiller, his plant shown below, Lackey transformed downtown Hamlet starting in 1906 by building its first block of brick buildings on Main Street, structures that still stand.  He surveyed and platted the downtown in 1898 and guided its development for the next twenty years.  Those construction projects were a source of pride to Lackey and brought him considerable community recognition. 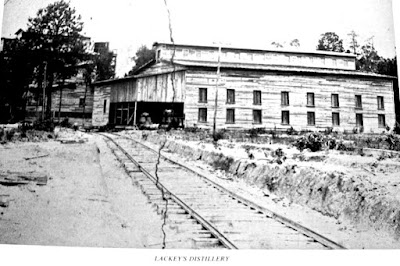 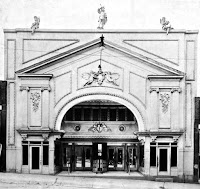 Lackey and his wife also contributed an opera house, shown here. “And for one glorious night in 1917,” according to an historian, “Hamlet was the center of the musical world as Italian tenor Enrico Caruso performed before a packed crowd….”   This performance brought the Lackeys to their pinnacle of success.

Unfortunately the glow was not to last.  The Spanish flu epidemic of 1918 ravaged Richmond County and caused North Carolina's governor to put Hamlet and other towns under a strict quarantine.  It did not save Eli who succumbed on October 11, 1918.  His two brothers, Ollie and Fred, his business associates, died in the same epidemic within three days of Eli’s passing.  Lackey’s wife and their four children survived.

Mrs. Lackey lived another 38 years, long enough to see the family fortune wiped out.  A survey of his estate following his death showed that Eli had left a vast amount of real estate.  It included much of downtown Hamlet and other properties.  The onset of the Great Depression in the 1930s, however,  hit the Lackey family hard.  By 1935 they had lost almost all their Main Street holdings and other tracts through foreclosure.  Their mansion home was sold and later torn down. 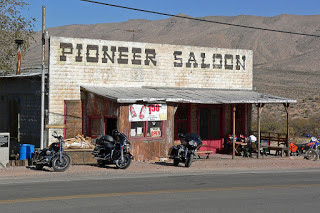 Born and raised in Los Angeles, George Arthur Fayle rejected big city life in favor of the barren desert lands of southwestern Nevada where he became a major force in the development of a mining boomtown called Goodsprings.  Already an experienced entrepreneur in 1912 when he moved his family there, Fayle in rapid fashion opened a tent store for miners, established an ore hauling business and built a saloon, which still exists, one he called “The Pioneer.”

Meanwhile, with ore plentiful Goodsprings was growing, reaching a population of about 1,000 in 1915 — larger than Las Vegas.  The following year Fayle built a hotel, shown here. It was among the most luxurious in Nevada, providing 20 guest rooms, electric lights, hot and cold running water, steam heat, and a restaurant that claimed fine dining. The hotel and restaurant initially were so successful that even Las Vegas residents made the forty mile trip south to Goodsprings.

Understanding that mining was the key to Goodsprings' economy, Fayle also invested in mines.  According to his obituary in the Las Vegas Age,  Fayle assisted prospectors who were attempting to make money from their claims:  “He handled the marketing and settlement for thousands of tons of ore for the miners and was foremost in every good work of a public nature.”  Fayle’s service  included six years as an elected member of the Clark County Board and from 1916 to 1918 its chairman.  Of his performance in office, the newspaper said: “…His strict integrity, his unflagging energy, his boundless generosity in the expenditure of his own time, money, and efforts for the benefit of the county have been invaluable.” 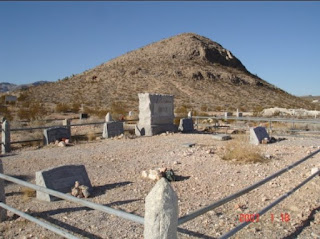 Tragically,  Fayle fell victim to the Spanish Flu epidemic that was sweeping the U.S.  Contracting the disease in December 1918, for several days he seemed to be recovering but then developed pneumonia and no medical response was effective.  His funeral services were held in the dining room of the Fayle Hotel and burial in the Goodsprings Cemetery, below.  His death was mourned as a grievous loss to the community.

George’s widow, Jean, recognized as a pioneering figure in her own right, stepped in to manage the family’s business interests, including the Pioneer Saloon.  She continued in that role until their sons had completed their education and were able to assume running the enterprises George Fayle had initiated. 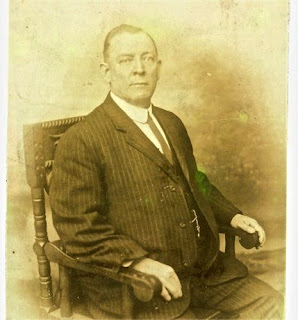 A third flu victim was Thomas A. McGuire of Philadelphia.  Thomas, working with his father James E. McGuire, helped form a group of major liquor dealers in Philadelphia who in 1892 announced the purchase of 103 acres in Bucks County to build “an enormous distillery for the production of rye whiskey.”   Although denied, this project was a direct challenge to the so-called “Whiskey Trust” and ultimately helped bring down the cartel.

Several year earlier a number of Midwest distillers had turned their plants over to a board of trustees who aimed to control the liquor trade through the kind of monopolistic cartel that had developed in oil and other American industries.  Officially named the “Distillers and Cattle Feeders Trust,” it was popularly known as "The Whiskey Trust.”  The organization, based in Peoria, Illinois, gathered in more than 80 distilleries, often using tactics like dynamite to convince holdouts.  Most of the plants the Trust procured were shut down. The idea was to control supplies and drive up whiskey prices.

For a time the Trust was successful, cornering, a significant percent of available liquor stocks.  The monopoly drove up prices for “raw” whiskey used by wholesalers, like the Maguires and their allies, for “rectifying” (blending) their proprietary brands.  By creating their own source of supply these Philadelphia whiskey men were striking a blow to end their dependency on the Trust. The important role played by the Maguires in organizing the distillery company was indicated by its board meeting at their Philadelphia headquarters to sign the original construction contract.  James Maguire subsequently was elected  treasurer.

The new organization, capitalized at $3 million (equivalent to more than $60 million today), was titled the Pennsylvania Pure Rye Whiskey Distilling Company.  “Nearly every large liquor dealer [in Philadelphia] holds stock in the company,” said one press account. A success from the outset, the distillery succeeded in significantly weakening the syndicate.

In 1900 James Maguire died.  Management of the liquor house fell to Thomas Maguire, then 36 years old and fully conversant with the business.  He maintained his father’s name at the head of the firm, as shown above in a 1909 letterhead.  He successfully managed the liquor house for the next 18 years and continued to press the anti-Whiskey Trust campaign.  In October 1918, however, a dual tragedy struck the Maguire family.  Thomas fell victim to the Spanish flu virus sweeping the country, as did his 17-year-old son, Thomas A. Maguire Jr. 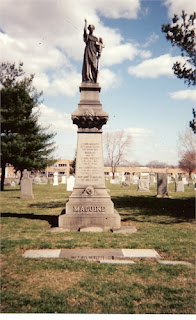 They were buried the same day in the family plot in New Cathedral Cemetery, adjacent to James’ grave under the Maquire monument shown here.  Their deaths ended Maguire prominence in the Pennsylvania liquor trade.  Other U.S. whiskey men had publicly and vehemently opposed the Whiskey Trust but it was the Maquires and their allies that struck an early blow against the monopolist intentions of the Trust and in the process severely crippled its effectiveness.

Note:  More complete vignettes devoted to each of the three whiskey men mentioned here may be found elsewhere on this website.  The dates of their posts are:  Eli Lackey, July 20, 2018;  George Fayle, February 9, 2019, and Thomas Maguire, November 18, 2017.