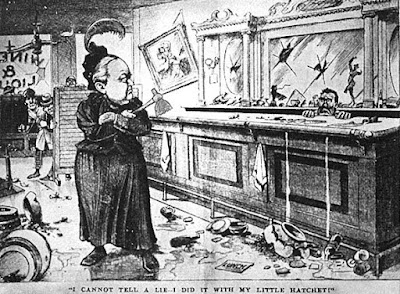 Foreword:  Born in June of 1846 in Kentucky, Carrie (“Carry”) Nation was woman who stood six feet tall and weighed in at 175 pounds. A fervent member of the Temperance Movement, in 1900 she heard a “Voice from Above” that told her to take something hard in her hands and go wreck saloons. Soon she had adopted a hatchet as her weapon of choice and intensified her attacks.  Although arrested some 30 times and spending many nights in jail, she became a national heroine of the Prohibitionist movement. During her escapades she encountered many “whiskey men,” primarily saloonkeepers.  This is the story of three of them.

In February 1901 Carrie took her crusade to the streets of Chicago.  In his 1931 book “The Old-Time Saloon,” writer George Ade reported of Chicago:  “Saloons were everywhere and many of them open all night and all day Sunday.  One of the most familiar statements…was to the effect that when a drink parlor was opened anywhere in the Loop, the proprietor went over and threw the key into the lake. The more famous hang-outs had not been closed for a single moment for years and years.” 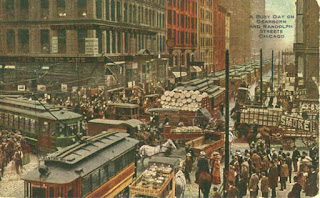 As a result when Carrie showed up early one morning on busy Dearborn Avenue, above, she found the modest saloon owned by one Henry McCall, open and doing business.  The interior likely resembled the photo here of a typical Chicago drinking establishment, except that McCall, apparently an art lover, featured a revealing statue of a nude woman in his front window.  Gathering her entourage around her, Carrie rushed into the saloon screaming:  “Cover that wicked and shameful object.” 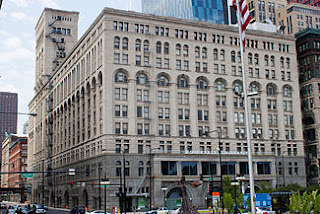 McCall was not in his establishment at the time and the bartender William Luther took the brunt of Nation’s charge. Promising to be back to check on the results, Carrie left to make a speech.  Unsettled by the event, Luther immediately got in touch with McCall, apparently a bachelor who lodged at the Auditorium Hotel in downtown Chicago, shown here. The owner rushed to the scene.  According to press accounts McCall tossed a “flimsy pink netting” over the statue that left two nipples peeking seductively through the mesh.

True to her promise, Carrie returned sometime later.   According to press accounts, the hatchet-wielder became even more outraged. She instructed McCall:  “I want you to take away that statue or clothe it properly at once.  Dress it as you would wish to see your mother and sister dressed.  Now, I mean what I say, and if you don’t obey by night I’ll make souvenirs of that statue.”

McCall, correctly reckoning that “a soft word turns away wrath,” told Carrie he would not like to see his sister insufficiently clothed, He promptly dressed the statue in an encompassing Mother Hubbard dress and plopped a sunbonnet on her head.  Carrie left apparently satisfied she had safeguarded the morals of Chicago. But McCall was playing a game.  As soon as she was gone, he pulled down the gown to expose the figure’s impressive left breast and tilted the bonnet seductively.  Said a biographer:  “Overnight the bar’s celebrity was sealed.”  Chicagoans crowded into McCall’s saloon to see the famous statue.  The proprietor is said to have enriched himself considerably from the publicity.

In 1846 the Maine legislature passed the first laws in the United States outlawing the sale of liquor statewide except for “industrial and medicinal purposes.”  Over the years those prohibitions were broadened and strengthened. Nevertheless, John A. Burns, among a number of Maine whiskey men, operated a wide open business for years, taking advantage of being located in Bangor, Maine — a city that earned the ire of Carrie Nation. 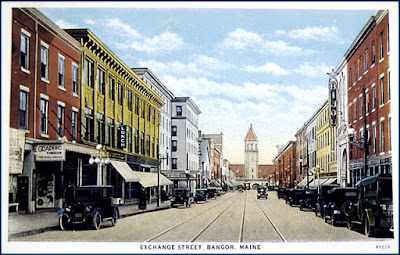 In Bangor a different alcohol regime prevailed.  Liquor dealers, saloons, hotels and restaurants operated under what was called “The Bangor Plan.”  Under this arrangement owners of establishments that sold whiskey, beer or wine could go to court twice a year and pay a set fine, some termed it a “tax.”  Police and other officials would ignore the traffic in spiritous drink the rest of the time.

Burns was the most prominent of the city's liquor wholesalers.  A Bangor historian has noted that “…The framed whiskey advertisements of Bangor wholesale dealer J. A. Burns & Co. [were] hanging in saloon windows all across town.”  Having been elected to the Bangor town council probably enhanced Burns’ reputation.  He was going into court semi-annually to pay a fine for his “liquor nuisance,” amounting to $210, equivalent to something over $5,000 today, but a still a bargain.  Moreover, as recorded by the Maine Attorney General, citations to Burns for liquor violations inevitably resulted in “no prosecution” — reasons not given. 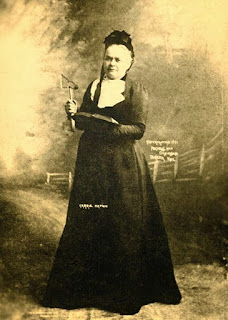 In 1893 former Maine Governor Neal Dow, a Prohibition Party stalwart, was asked:  “Do you know anything about how the prohibitionary law works in the city of Bangor.  Dow replied:  “I do not know anything good about Bangor.”  It likely was Dow and his compatriots who invited Carrie Nation and her hatchet to come to Bangor.  She would go anywhere she was asked, if her way was paid.  Her arrival in 1902, announced by the press, must have been anticipated by both “dry” and “wet” forces, including Burns. 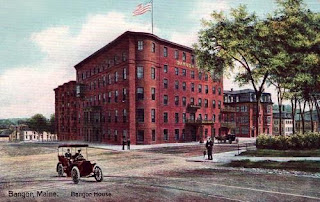 Her sponsors checked her into the Bangor House, shown left, then the largest hotel in Maine and considered the city’s finest hostelry, boasting a fireplace in each room and steam heat throughout.   Soon after arriving, Carrie drifted downstairs to the hotel restaurant where she found guests being served alcohol drinks.  She promptly raised a ruckus.  But alerted to her visit, local authorities were waiting. Carrie promptly was escorted back to her room, made to pack, ejected from the hotel, and delivered into the custody of the local police.  Although not incarcerated, she was shown the way out of town.   Thereafter, Carrie had only invective to heap on Bangor.

Having been arrested in her native Kansas, fined and jailed for a time, about 1905 Carrie moved her operations to the town of Guthrie in the Oklahoma Territory where a controversy was brewing about adopting a “dry” constitution when Oklahoma became a state.  A biographer commented:  “Paradoxically, the region was as lawless as any part of the country, the refuge of gunmen and rustlers, a place beyond the reach of state and federal marshals….”

There Carrie met Moses Weinberger. In 1889 Weinberger had headed for the newly opened Oklahoma Territory to seek his fortune.   It came to him initially through the sale of bananas to homesteaders and later when he opened the first legal saloon in the Territory.  He was known as “The Same Old Moses,” also the name of his drinking establishment, shown below.  The center figure, I believe, is the proprietor. 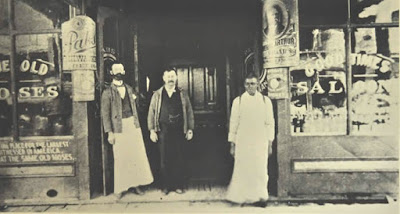 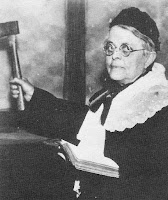 Weinberger was a popular gent in Guthrie, a genial saloon proprietor who regularly gave his customers tokens good for drinks and gifted them with other items.  He demonstrated his sense of humor by inviting Carrie Nation into his drinking establishment to give a temperance speech.  Weinberger made one stipulation, however, there was to be no axe swinging.  Carry kept her promise until the end of her speech when she apparently felt she had to satisfy the fanaticism of her entourage.  Having been handed a hatchet by one of her adherents, Carrie whirled about and did what she called a “hachetation” on Moses’ mahogany bar, removing a chunk of it.

Carrie promptly was removed from the premises and Weinberger later hung a sign over a wall of the saloon that read:  “All Nations welcomed except Carrie.”   The hacked bar took on an instant celebrity, shown to visitors repeatedly as the place where the prohibition zealot had done her damage.  It also reputedly became the place where saloon patrons banged their empty beer mugs when they wanted another round.  In 1907 Carrie left Guthrie for Washington, D.C., never to return. 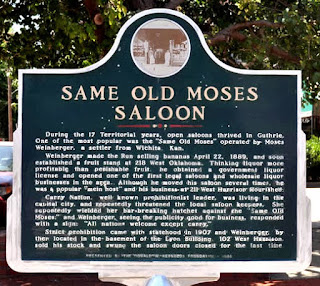 Weinberger’s memory is enshrined in a marker on the spot where his saloon once stood.  It tells the story of the pioneer saloonkeeper, his encounter with Carrie Nation, and the coming of statewide prohibition..  On a list of “State Greats,” in a history book used in Oklahoma schools the name of Moses Weinberger could be found in the company of humorist Will Rogers and athlete Jim Thorpe.  Carrie Nation’s name does not appear.

Notes:  The incidents that make up this post come from a variety of sources.  The Chicago incident has been written up several times, including by Robert Lewis Taylor in his 1966 book, “Vessel of Wrath: The Life and Times of Carry Nation.”  The Maine incident is from news stories.  The Oklahoma account was derived from a 1937 interview of Moses Weinberger by Ruth W. Moon for the Indian-Pioneer History Project.  Longer biographies of Burns and Weinberger on this post can be found, respectively, at April 8, 2016, and February 15, 2014.