J.H. Kearns: His Sunny Side Saloon Had a Bloody Past 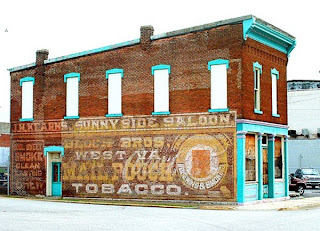 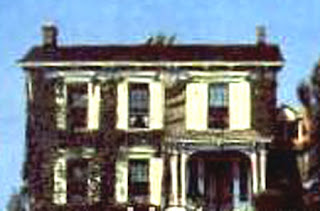 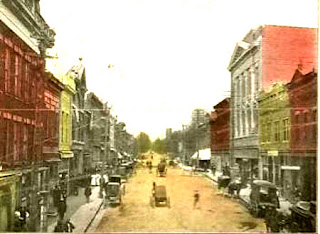 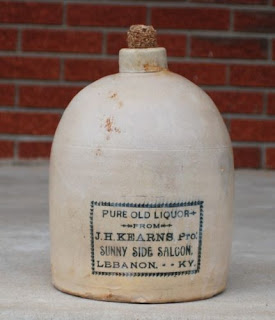 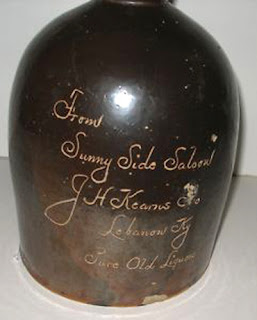 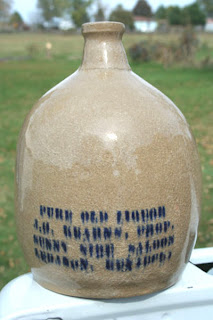 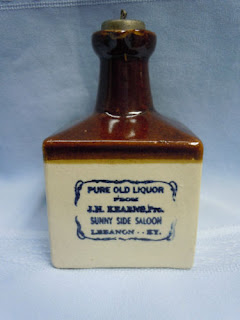 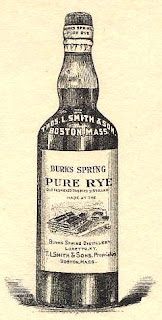 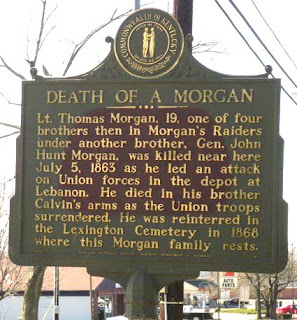 Seldom does a building dominate the story of a whiskey man and his organization. In the case of J. H. Kearns of Lebanon, Marion County, Kentucky, however, the site of his Sunny Side Saloon has been made memorable by a bloody Civil War battle.

Shown top right in more recent times, the building originally was the commissary for the Union garrison stationed in Lebanon. It stood directly across from the railroad depot. Both structures were direct targets of a major Civil War attack in 1863 by Confederate General John Hunt Morgan’s Raiders.

During an intense and bloody day long conflict, Morgan’s youngest brother, Lt. Thomas Morgan, was mortally wounded. As he lay dying he was carried to “Sunnyside” the nearby home of a Presbyterian minister, shown top left. Thomas initially was buried in Lebanon, but reburied later in the Morgan family plot in Lexington.

Angered by the death of his brother and the unwillingness of the garrison commander to surrender easily, General Morgan burned a number of buildings in Lebanon, including a frame house attached to the brick commissary. Amazingly the latter building escaped significant damage although Morgan’s Raiders emptied it of food and supplies.

Kearns was just over three years old at the time of Morgan’s Raid and obviously had no memory of it.  He was born “John Kerons,” son of Patrick and Mary Kerons, Irish immigrants, who lived and farmed in Loretto Precinct, not far from Lebanon.  His father appears from census records to have been fairly affluent and may have been able to give his son a start in merchant life.  With his wife, Katherine Smith Kearns, whom he married in 1878 or 1879, he fathered nine children of whom eight lived to maturity.  All had successful careers, including a Jesuit priest who became a college president.  None other than John H. entered the whiskey trade.


After the Civil War, the commissary structure was briefly a grocery store before being bought by Kearns in the late 1880s and named the “Sunny Side Saloon,”  doubtless a reference to the old mansion nearby.  By adopting so cheerful a name he apparently was heedless of the bloody history of the site.  The saloon soon became a favorite watering hole for the citizens of Lebanon.

Kearn’s saloon also sold whiskey to be taken off premises and he commissioned a wide series of ceramic jugs for that purpose. The few provided here demonstrate the breadth of formats he used. Kearns must have issued hundreds of jugs as they frequently come up for sale on auction websites.

Possibly seeking a more ready supply of whiskey for his saloon, in 1905 Kearns joined George R. Burks, the scion of a longtime Marion County distillery family in a whiskey-making operation in nearby Loretto, Kentucky.  Burks had revived a distillery that his great-grandfather had founded and in 1905 sold partnerships to Kearns and another local.  Shown here in an illustration, the partners called it the Burks’ Spring Distillery Company.  Under this new management, the partners allowed various liquor dealers claim proprietorship of the distillery and bottle its product. Among them was Thomas Smith & Sons of Boston.

In 1907 Kearn’s saloon business came to a screeching halt when Lebanon, under Kentucky’s local option laws, voted the town dry, and Kearns, like others local saloonkeepers, was forced to shut down his operations.  The action did not, however, affect the Burks Spring Distillery that continued to operate.  Perhaps in disgust, Kearns and his family moved to Louisville.  The 1900 U.S. Census found him there with wife, Kate, and seven of his children, ranging in age from 27 to 13 years old.  His occupation was given as “distiller - whiskey.”  Later that same year Kearns died at the relatively young age of 52 and was buried in St. Louis Cemetery, Louisville. With the coming of Prohibition in 1919, the Burks’ Spring Distillery was sold to a Lebanon local who farmed the land and raised cattle. The distillery buildings were allowed to deteriorate but were not razed. When Bill Samuels Sr. founded Maker’s Mark Distillery in Loretto in 1953 he incorporated parts of the old Burks’ Distillery into his operation and subsequently restored some of the original structures. In addition, Kearns was forced to shut down his saloon.

The commissary building that J. H. Kearns turned into a saloon subsequently was put to other uses and still stands in Lebanon, with Kearn’s name emblazoned on the side. Nearby a memorial sign has been posted near the place where the young officer, Lt. Thomas Morgan, and others, both Yanks and Rebels, fell.  It is a continuing reminder of the bloody past that the ground of the Sunny Side Saloon enshrines.

Note: After this post appeared in 2011, I received an email that began thus:  Hello Jack Sullivan, this is Wendell Grayson in Springfield, KY and I grew up in Lebanon and have now grown to 71 years old. I've been a history buff my entire life and  the Sunnyside Saloon building has always been special to me. Mr. Grayson was kind enough to provide additional information about Kearns and his saloon as well as point up one or two serious errors in the original text.  I am grateful to him for his continuing help and have incorporated his information into this article.
.
Posted by Jack Sullivan at 10:18 AM