His parents were early immigrants to California, perhaps drawn by the prospect of gold or other possibilities for prosperity in America’s Far West.  In maturity, however, Albert Dallemand decided that his path to great fortune led, not in the West, but back East.  Thereupon this whiskey man from San Francisco made his own highly successful gold rush to Chicago.

Dallemand is a Scotch or Irish name and Albert’s parents were from Austria, an indication that they had changed their name or had it 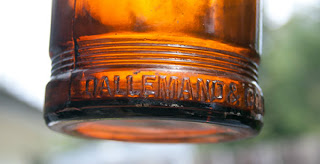 changed for them upon entry.  That was the family name by the time Albert was born in 1838.  He apparently showed an early aptitude for business and seems to have been engaged as a youth in learning the liquor trade.  In 1872, having accumulated sufficient capital at the age of 34,  Dallemand and two partners bought out an existing San Francisco wholesale liquor house opened in 1865 by two brothers named Wormser.  It was located on the southwest corner of California and Front Streets. 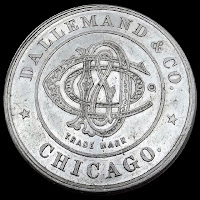 The new partners called their operation Frank, Dallemand & Company, working out of the same address.   Ever ambitious, Albert bought out his partners in 1875 and shortly after reconstituted the company with a new partner,  a Californian named H.C. Bothin.  Operating as Bothin, Dallemand & Co., the firm showed up in San Francisco directories with locations at 305 Front Street and subsequently at  215 California.   Dallemand added two new partners, Tobias and Max Oberdorfer.  They may have been relatives of his wife, Elise, herself the offspring of Austrian immigrants. 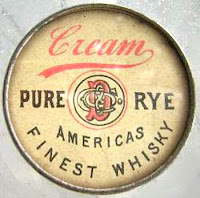 Dallemand became increasingly restive about the limited market and perhaps stiff competition he faced in San Francisco.  In 1885 he opened a branch in Chicago at 192 Jackson Street.   Apparently tiring of the cross-country commute involved, probably a three day train ride each way,  he wrung an agreement from Bothin to dissolve their firm by mutual consent.  Bothin retired and the company became Dallemand & Co.  Albert and Elise moved to Chicago and an agent was selected to distribute the firm’s liquors in California.

By 1887 Dallemand’s Chicago business was moving rapidly toward a national market.  He was advertising heavily in newspapers across the United States.  His flagship brand, blended in his own facilities, was “Cream Pure Rye.”  Although his ads described its “delicious flavor,” he also sold it for medicinal use, claiming that physicians were recommending it “to sufferers from lung diseases, heart failure and weakness succeeding La Grippe.”   He issued it in a distinctive proprietary bottle  embossed with the name.  This and other bottles also had Dallemand’s name embossed at the base.  Other Dallemand house brands were “D & Co.,” Old Joe Murphy,” and “Standard Time.”

At a time when wholesalers and “rectifiers” competed by issuing giveaway items,  both to retail customers and to the establishments featuring their liquor,  Dallemand was in the forefront.  The man on the bar  stool might get a Dallemand token that touted Cream Pure Rye as “rich and mellow” on the reverse, or perhaps a pocket mirror with a similar message.  To the saloonkeeper,  a Dallemand match safe for Cream Pure Rye was presented. The safe issued a challenge:  “Match It If You Can.”   There also were shot glasses and, perhaps most important,  saloon signs.  While some whiskey merchants tended to female nudity in their offerings -- only men were allowed in most drinking establishments--Dallemand’s ladies were generally dressed. 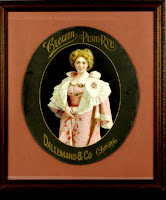 With his growing business,  Dallemand moved to 51 Lake Street where he bottled his wines and liquors for sale. This was a five story building with a basement.   According to records, the washing and filling of bottles from barrels was done in the basement, as shown  on a Dallemand trade card.  The first and second floors were devoted to sales.  The third floor  contained cases of bottles,  also shown on a trade card.  The fourth floor was devoted to containers of unblended whiskey that had been delivered to Dallemand from distillers in Kentucky and elsewhere.  The top floor stored empty bottles, ready for filling.  From top to bottom the floors were connected by an elevator--and there lay a problem. 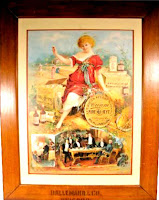 According to court records, the elevator was operated in a shaft “without any doors or protection whatsoever.”   Nor was there a trained operator.  Both were violations of Chicago’s safety laws.

On August 20, 1894, David Saalfeldt, apparently a new employee, was told by his boss to go to the fifth floor to fetch bottles and take them back to the basement.  Saalfeldt, unfamiliar with the workings of the lift,  fell down the shaft and was killed.  The young man’s father sued Dallemand for negligence in causing David’s death.  The court agreed and levied a judgment, amount undisclosed, against the whiskey man.   Dallemand appealed the verdict to the Appellate Court of Illinois.   After hearing the evidence, the three judge panel upheld the lower court in 1897,  citing Dallemand for negligence and stating:  “...The evidence is conclusive that there was no compliance...with the city ordinance....”

During this court battle over Saalfeldt’s death,  Dallemand suffered another blow when his wife Elise died in 1896, only 45 years old.  There was no

indication of surviving children. Her body was taken from the couple’s 2211 Buchanan Street home and by train transported back to San Francisco.  She was buried in the Home of Peace Cemetery in San Mateo, California.  Shortly after these events Dallemand moved his operation down the street to 81 Lake.  He would remain there until 1906.  Subsequently Dallemand & Co. moved frequently to locations on West Monroe, Lasalle Avenue, and finally, its last address, to Dearborn and West Madison.  In 1918, as Prohibition approached,  the company terminated.

Dallemand himself remained in the Windy City, possibly looking after other business interests.  In 1920 after an illness he died there in Michael Reese Hospital.  He was 70 years old and, according to the 1920 census, boarding in The Pines Hotel.  He continued to list his occupation as 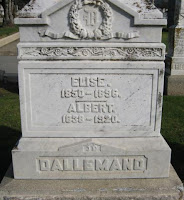 president of a liquor company. Services were held in a local funeral home and his body transported by rail back to California.  He was interred next to Elise in Home of Peace Cemetery,  not far from the grave of his mother, Caroline.  Having gone East for the action, Albert Dallemand had come back West to a place of rest.