The Elusive Dr. C. Bouvier and the Rosenbaum Brothers

Among the most interesting of the “liquor as medicine” hucksters was the mysterious, and almost

certainly fictional,  Dr. C. Bouvier of Louisville, Kentucky. His buchu gin bottles are dug or found in flea markets all over America   Many have interesting shapes and colorful labels.

All contained “buchu gin,” a potion made by straining gin liquor through the leaves of the Latin American buchu plant, presumably taking along their essence and health-giving properties. Dr. C. Bouvier’s Buchu Gin was vigorous advertised as a remedy for 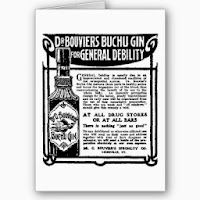 kidney and bladder diseases or for “general disability,” often a euphemism for impotence.   One of its ads explicitly scoffed at physicians.  It read: “Don’t let them kid you because the doctor says you can’t drink. Put your foot on the rail and look wise at ‘the doctor behind the bar’ and say ‘Dr. C. Bouvier’s Buchu Gin.’”   A trip tray advertising the nostrum shows an benign elderly couple, with the obvious implication of the longevity involved in drinking buchu gin.

But who was Dr. C. Bouvier, the medical man whose signature was said to be on every bottle? A substantial factory building stood in Louisville with his name prominently attached to buchu gin as one product of Dr. C. Bouvier’s 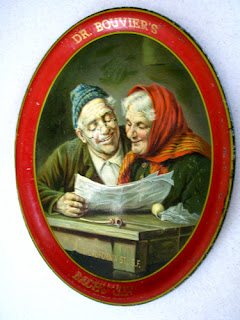 Specialty Company.   A search of Louisville directories and census records of the time, however, fails to find any physician with that name, or for that matter any Bouvier at all.
.
A clue is a shot glass advertising Dr. B’s potion, shown here. It also names the Rosenbaum Brothers. As early as 1886 members of the Rosenbaum family had been in the wholesale liquor trade, doing business at several locations on West Market Street in Louisville.  They often sold their liquor in ceramic jugs as shown here.   They were rectifiers, not 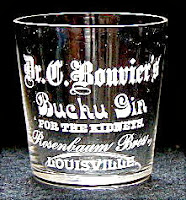 distillers, buying whiskeys from various Kentucky distilleries, blending them to taste, bottling them, and selling them with labels that variously read “Glee Club” and “Kentucky Home.”

Census data indicates that brothers, at least five in number,  were the sons of Isaac Rosenbaum, a dealer in wool, and his wife, Sarah, who had emigrated from Germany in 1875. The brothers, in order of birth, were Leon, Sam, Benjamin, Harry, and Jesse.  Shown below is a photo of five men in suits and hats standing by five almost identical Lincoln sedans.  The men are identified as the Rosenbaum brothers.  They are posing in front of homes owned by family members in the

the center of downtown Louisville.  Note that a chauffeur is seated at the wheel of each vehicle.

A Louisville historian credits this wealth to a move the Rosenbaums made about 1905, closing out their liquor business to move to proprietary medicines.  He says:  “In 1905 they changed their company name to Dr. C. Bouvier Specialty Company, manufacturing proprietary medicines, principal among them the buchu gin concoction.”  Local directories indicate that at various times all five of the brothers were involved in the business. The Rosenbaums advertised their buchu gin heavily.  They also issued shot/dose glasses and tip trays to saloons and other establishments that stocked their “medicine” and gifted watch fobs and folding tooth picks to retail customers.

In 1909 the Rosenbaums were hauled into the Circuit Court of Franklin County for failure to pay a state tax on its buchu gin.  Found guilty,  they appealed.  In April of that year the Kentucky Court of 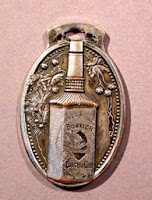 Appeals registered its decision.  In the process the court described the  ingredients of Bouvier Buchu Gin: “It is manufactured by pouring pure gin upon a bed or mat of buchu leaves and allowing it to percolate through; then add distilled water and syrup, the gin comprising some 50 percent or more of the compound.”  Not surprisingly, the court found that the nostrum was liquor and that the Rosenbaums owed the state tax.  Nowhere in the judicial proceedings did Dr. C. Bouvier show up to argue its medicinal qualities. 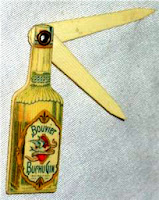 About the same time,  Federal authorities were on the trail of the Rosenbaum’s buchu gin, this time for claiming to be medicine.  In September 1908 Department of Agriculture officials raided eight Washington saloons and liquor stores and seized 109 cases of Dr. C. Bouvier’s Buchu Gin, each case holding 12 bottles.  The value of the items confiscated was estimated at $660.  The feds accused the Rosenbaums of violating the Food and Drug Act of 1906 by misbranding the product.  Although being sold as a drug, the bottles failed to bear a statement on the label indicating the proportion of alcohol they contained.  Hauled into the Federal District Court of the District of Columbia,  the Rosenbaums conceded their violation and were fined $1,200, more than $12,000 in today’s dollar.   Upon payment of the fine the cases of buchu gin were released back to the brothers for re-labeling and potential return to the DC outlets for sale.  Again, there was no sign of Dr. C. Bouvier in the federal proceedings.

Obviously some irony existed, not lost on the Rosenbaums, that their buchu gin was cited by state authorities for being liquor and by the federals for being medicine.   Nonetheless, these troubles apparently wrought a change in the brothers’ business practices.  The name of the company was altered to “Bouvier Specialty Company.”  The ever elusive “doctor” was gone.  The company appeared in local directories,  located at 29th Street and Magazine in Louisville,  from 1915 to 1919.  At that point, with National Prohibition enacted,  both the Bouvier Specialty Company and buchu gin disappeared.   As for the Rosenbaum brothers, the photo below, showing them in front of their chauffeured Lincolns and large homes, was taken about 1935. It would indicate that they survived just fine. 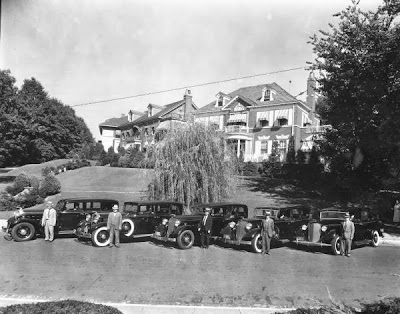