Having for several years tried to find a female who played an important role as a “whiskey man” in America,  I have at last come across an extraordinary woman.  She is Mary Dowling of Anderson County, Kentucky.  Not only did she own and run a major distillery, shown above, she found a way to stay in the liquor business after 1920 and, in effect, thumbed her nose at National Prohibition.

She was born Mary Murphy in 1858 in the State of Kentucky, the daughter of Irish immigrants.  Little of her girlhood or education is recorded until she reached the age of 17 when in 1875  she married a man at least 17 years her senior.   His name was John Dowling.  They would have nine children of whom eight would live to maturity.

Born in Ireland in 1841, John Dowling had come to the United States with a brother, Edward, and was already established in the Kentucky whiskey trade at the time of their marriage.  He was a 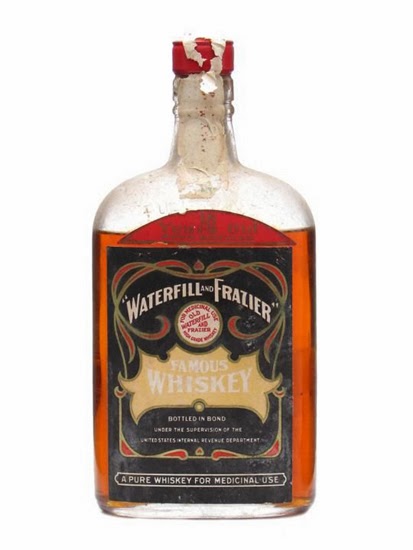 partner in a distillery in Anderson County, located on Bailey’s Run about four miles south of Lawrenceburg Courthouse.  The facility had been built in 1810 and after several owners the facility had come into the hands of J. M. Waterfill and G.G Frazier during the Civil War.  They produced a brand of whiskey they called “Waterfill & Frazier.”

During the early 1880s Dowling joined the original partners and the firm became Waterfill, Dowling & Company.  At the time the distillery was mashing 60 bushels a day and had a storage capacity for about 3,000 barrels for aging the whiskey.  Over the next few years the facilities were greatly expanded.  By 1890 mashing capacity had been increased to 125 bushels and warehouse capacity exceeded 9,000 barrels.  Insurance records from 1892 noted that the entire distillery was ironclad with metal or slate roofs, including four bonded warehouses and one “free” (from Federal regulation) warehouse.  Slops from the fermentation process were being used to feed hogs that were housed in pens near the still house.

By 1890 the Anderson County distillery was mashing 250 bushels per day and had a warehouse capacity for 21,000 barrels.   Over the years John Dowling increased his ownership of the facility and in early in the 1900s became the full owner, with his brother Edward assisting him.  They kept the “Waterfill & Frazier” name for their flagship brand and also did business as the Pilgrimage Distilling Co., with offices in Cincinnati.  About the same time, apparently recognizing the business acumen of his wife, John brought Mary into the company.   Not long after,  he died at age 61.  His grieving widow inherited the firm and its management, becoming one of a handful of women in that era to run a major distillery.

During ensuing years,  Mary Dowling became part of Kentucky whiskey lore in her evident ability to control a major operation.   Even a major fire in 1904 that destroyed the distillery did not deter her and the facility was quickly rebuilt.  When Mary’s sons came to maturity, they too were brought into the business.  As her reputation as a businesswoman rose in Anderson County, she followed other economic opportunities.  She became a founding stockholder of the Anderson National Bank in 1907, capitalized at $100,000.  Mary was not, however, given a seat on the bank board.

Mary’s success of almost two decades, however, came to screeching halt with the imposition of National Prohibition.   Federal records shown her withdrawing large quantities of whiskey from her bonded warehouse in the run up to the ban on alcohol.   Some of this whiskey she is reported to have sold to those Kentucky distillers fortunate enough to be licensed to sell liquor for “medicinal purposes.”   Other stocks, it would appear, she was bootlegging.  It was during this period, I assume, that she earned the reputation for being “mysterious” and caused at least one writer to term her “infamous.”

Her illegal business worked for about four years until 1924 when revenue agents set a trap for the Dowlings, who were operating both out of their home and from an office next to two distillery warehouses, supposedly sealed, in which large quantities of liquor were stored.  Federal agents arrived with two “turncoat” bootleggers in their automobiles, men who had done business with Mary in the past.   The agents watched as the bootleggers entered the house and bought out two sacks of whiskey, each containing a dozen bottles.   They watched as the sacks were placed in one of the autos, then searched and seized them, as their stool -pigeons reputedly ‘fessed up.  The “sting” had worked. The agents thereupon entered the Dowling home with search warrants.

In the basement they found and sized 478 sacks, each holding 12 quarts of whiskey, exactly like the ones deposited in the bootlegger’s car.  They seized the liquor and arrested members of the Dowling family, including three of Mary’s sons. This was in spite of her contention, as a court record later narrated, that the whiskey had been there before Prohibition and was “to be for the use of family and guests, whom she entertained on a large scale.”

The Dowlings were prosecuted for a conspiracy to possess, transport, and sell intoxicating liquors in violation of the National Prohibition Act. There ensued three years of court cases both in Kentucky and Federal courts as the Dowlings through their attorneys contended that the search warrant was flawed, that criminal charges should be dropped,  and the seized liquor returned.  An initial trial was adjourned when Mary Dowling became sick.  The indictment was renewed by the government in 1925 and this time the Dowlings were convicted.   Then fate intervened.  Upon the Dowlings' appeal of the conviction to the U.S. Sixth Court of Appeals, it was found that the stenographer who had taken the record of the earlier trial had died and no one could read his notes. That was

enough for the Circuit Court and they threw out the convictions.

By this time Mary Dowling had hatched a new -- and more successful -- business plan.  About 1926 she hired Joseph Beam, one of Kentucky’s premier distillers but now out of work, to dismantle the Waterfill & Frazier distillery, transport the pieces to Juarez, Mexico, reassemble it there, and resume making whiskey.  Mexico had no prohibition so the liquor production was completely legal.  Beam, shown right, was all too glad to oblige.  With two of his seven sons, Otis and Harry, he decamped South of the Border and built the facility shown here on a postcard.  They called it the “Dowling Mexican” (D.M.) Distillery.  Beam stayed several years on the job and a relative said his son Harry “essentially grew up in Mexico.” 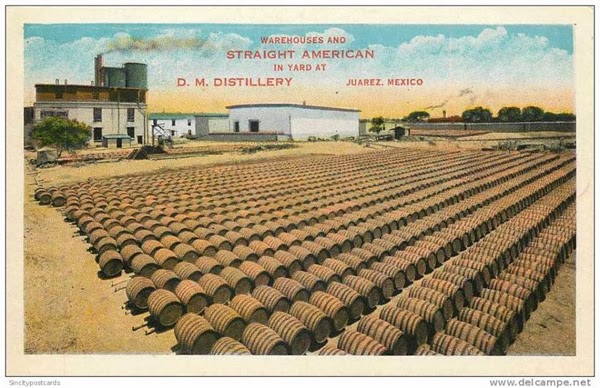 The primary market for this Waterfill & Frazier whiskey was in Mexico and Central and South America.  Compared to the local whiskeys,  Mary Dowling’s “bourbon,” (actually a blend) was a quality product and highly successful.  As a result a number of artifacts bearing Spanish language and 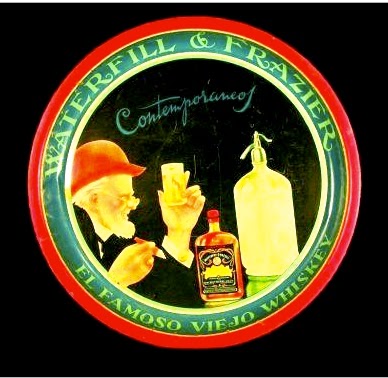 theme,  particularly trip trays, can be found on auction sites. 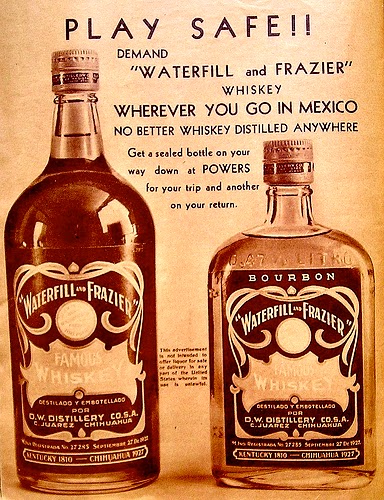 Because Juarez, in the state of Chihuahua is so close to the U.S. border,  thirsty American tourists also could enjoy it and even, as an ad hinted, bring a bottle or two with them back to the U.S.  There also is evidence that Mary Dowling had found other ways to get her whiskey to the American consumer.  A letter exists to 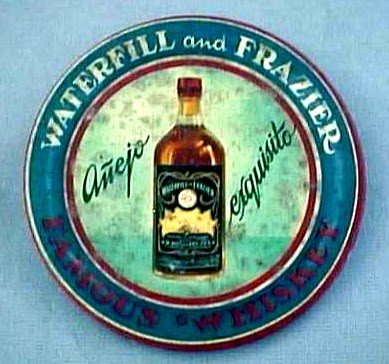 her from Julian Van Winkle, one of those lucky distillers with a “medicinal” license.  He complained that his sales reps were having trouble selling her Kentucky-made Waterfill & Frazier 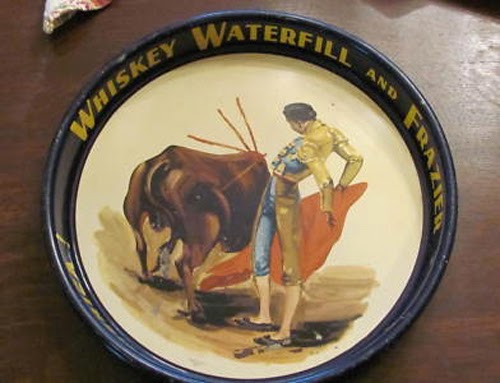 Bourbon because of competition from other quarters selling her Mexican product.  Van Winkle did not even hint at how Mexican bourbon might have made it onto the legal market in the United States.   He knew Mary already knew.

In 1930, four years short of Repeal,  Mary Dowling died and was laid to rest in Section 5 of the Lawrenceburg Cemetery in Anderson County.   In the grave next to her is John Dowling whom she outlived by 27 years. As shown here, the remaining buildings of the Anderson County  distillery were

allowed to decay as the forest grew up around them.  After the end of Prohibition in 1934,  one of

Mary’s sons,  also named John, built a new distillery at Fisherville, just outside Louisville at Echo Trail at Ford’s Fork.  Sometime later he sold the property to a Kentuckian who closed the facility but kept the Waterfill & Frazier brand name and label design, transferring both to Bardstown where he had another distillery.  Thus some U.S. bottles and artifacts designated “Waterfill & Frazier” are post-Prohibition.

Although she died before witnessing Repeal, Mary Dowling had forged a path for women  -- and men --  in whiskey history that may never be surpassed.  Unlike most of the male Kentucky distillers who quietly shut down, Mary actively rebelled against the “Dry Laws” and after one attempt to circumvent them proved to be problematic, created a second strategy that succeeded beyond all expectations.  Call her “mysterious" or “infamous,” as some have done,  I call her a genius for having thumbed her nose at National Prohibition and beaten it.

Posted by Jack Sullivan at 7:28 AM