Martin Shaughnessy of St. Louis: Fire Within and Fires Without

Martin Shaughnessy was about fire.  Fired within by strong ambition to succeed, principally by selling whiskey, this Irish immigrant lad quickly gained recognition in the business circles of St. Louis.  But the fires that ravaged major landmarks in the city seem likewise to have been on his mind — and eventually spurred him to action.
Martin was born in County Galway on the west of Ireland in 1855, the son of Michael S. and Mary Mooney Shaughnessy.  When he was about eleven years old the family came to the United States and settled in St. Louis where they already had relatives living.  The boy was educated in local schools. 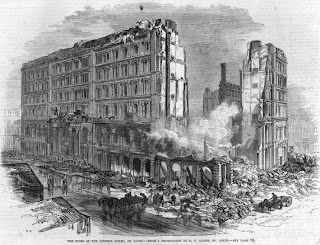 The Shaughnessys had resided in the Missouri city only a few months before a major conflagration had all of St. Louis buzzing.  Shown above in ruins, the Lindell Hotel, touted in the local press as “the largest building of its kind on the Continent, if not in the world,” was destroyed in March 1867.  After a mysterious blaze broke out on the fifth floor, firemen were unable to reach the flames with their hoses and fire quickly spread to upper floors, in the end reducing the vaunted hotel to rubble.  Martin, now 11, almost certainly witnessed it as city residents by the thousands flocked to the flaming site.

Upon completing his education, Shaughnessy went to work for an uncle who was in the hotel business, managing the American House Hotel.  After learning the hospitality business, the young man moved to John C. Foley Company, wholesale whiskey commercial merchants.  He spent three years there learning the liquor trade. Then, fired by ambition, he struck out on his own in 1877.  He was assisted in this effort by his ability to take over for an uncle, John Mooney,  who owned a St. Louis wholesale and retail liquor dealership, listed in local directories at 100 East Twelfth Street.

Martin almost immediately changed the name of Mooney’s firm to his own — “M. Shaughnessy & Co.” — another sign of the ambition burning inside him. He found almost immediate success in the whiskey trade.  His first address listed in directories was 121 Locust Street, followed by a a rapid series of consecutive moves to locations on North Main, North Sixth, and for many years an address on St. Charles.   His need for larger and larger spaces likely was driven by his activities as a “rectifier,”  that is, he was blending and compounding raw whiskeys received from distillers to achieve desired taste and smoothness, bottling them and applying his own labels.

His proprietary brands, included “Coal Port,”  “Grandee,” “Leroy,” “San Bois,” “Diamond Brand,” “Shaughnessy Rye Malt,” and “Shaughnessy’s Special.”  His flagship was “Club House Whiskey,” which he trademarked in 1888  and again in 1905, after Congress stiffened the infringement laws.  By 1906, despite the expense involved, he had trademarked most of his brands.  Those whiskies were issued at retail in both clear and amber bottles, sized from minis to flasks to quarts. 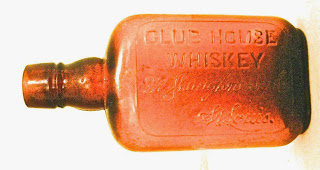 Much of Shaughnessy’s success can be attributed to his frequent and imaginative advertising.  Shown left is an 1891 ad for his Diamond Brand.  He describes it as “distilled from selected rye and barley malt, after the formula of a noted Pennsylvania distillery.”   Like many whiskey men of his time, he ascribed medicinal qualities to the blend claiming:  “It will be found especially valuable in conjunction with milk in the treatment of all pulmonary troubles.”  At left is a 1900 ad in the National Druggist magazine for his Club House Brand, touted there as a stimulant.  Pure whiskey is sometimes hard to get, the ad states, but yet “how essential it is for medicinal purposes.” 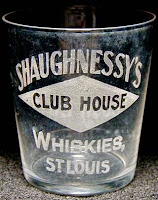 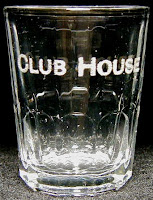 Shaughnessy also adopted merchandising techniques common with wholesale whiskey dealers.   He issued a series of shot glasses that advertised his brands, particularly Club House Whiskey.  Those items would be given to favored customers, particularly saloon owners and bartenders who were buying and featuring his brands.  Also echoing a trend in his trade, in 1905 Martin changed the name of his firm to the M. Shaughnessy Distilling Company.  Although laws prevented rectifiers from designating themselves “distillers,”  the “distilling company” label was legal for them.

Meanwhile, Martin found time to marry.  At age 36 in 1891, he wed Agnes Tivy, born in 1867 in St. Louis, the daughter of John Tivy, an Irish immigrant, and Margaret Ahern, a native of St. Louis.  Agnes has been described by one source as “a young woman of means.”  By this time Martin himself also was growing wealthy.  An 1924 newspaper article said Shaughnessy’s career “soon brought him among the first St. Louisans in wealth and prestige.” 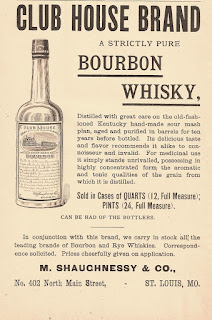 Martin and Agnes are not recorded as having children and apparently spent much of their married life living in hotels.  One of them likely was the Lindell Hotel that had been rebuilt following the 1867 fire. Once again it was the largest hostelry in St. Louis, and accounted “the best appointed and conducted hotel” for travelers in town.  In April 1886, the Lindell caught fire a second time;  this blaze originated in the basement, spread to the lobby and smoke engulfed the entire building.  The press described the hotel as “so badly damaged by fire, smoke and water that tonight its interior presents a sad appearance.”  This time, however, it was not destroyed.

Hotel fires seem to have been endemic in St. Louis.  In 1883 the four story Occidental Hotel was ruined an a fire that took the life of a firefighter.  A residential hotel fire took the lives of eleven occupants.  Later, the Hotel Belvidere burned at the southeast corner of 14th Street and Washington Avenue.   Shaughnessy must have been well aware of the dangers but decided to invest in a hostelry that already had burned twice.  As one writer described it:  “Not content with his considerable assets, he decided in 1898 to acquire and manage the Lindell Hotel….”  With the purchase of the Lindell, Martin and Agnes made it their home. 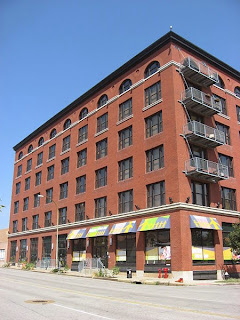 Meanwhile, Shaughnessy’s whiskey business required a larger warehouse facility for storing his whiskey for aging.  In 1903 he acquired for $70,000 (equivalent to $1.75 million today), a parcel at the northwest corner of Washington Avenue and 22nd Street.  There in 1906 he commissioned a structure that still stands today as the Martin Shaughnessy Building, a six-story red brick Classical Revival warehouse now on the National Register of Historic Places.  Shown right, the building’s claim to fame is that it was the very first fireproof warehouse in St. Louis and one of the city’s first completely fireproof buildings.  One writer has speculated:  “Probably having witnessed…the 1867 fire at the old Lindell Hotel, the 1885 fire at the new Lindell Hotel or any number of other local conflagrations, Shaughnessy would have had ample inspiration to speculate capital on an innovative fireproof storage warehouse.”

Recognizing the inflammatory nature of his stored whiskey, Shaughnessy insisted that the building be constructed entirely with fireproof materials, including brick and terra cotta on the exterior and concrete flooring and ceiling on the interior.  Load-bearing interior iron columns were sheathed in hollow-tile terra cotta, then coated with a layer of concrete to provide extra protection from fire.  Heavy fire doors at each floor sealed access to storage spaces. 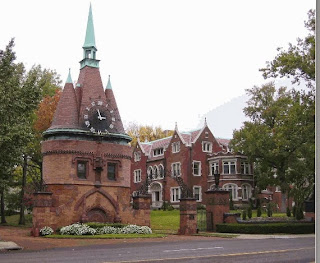 During this period, Shaughnessy also was deciding the fate of the Lindell Hotel.  Never the same after the second blaze, the hostelry was torn down to make way for new commercial construction.  Martin and Agnes now moved to the Washington Hotel, but only temporarily.   Wealthy St. Louisans were  foreshadowing the gated communities of our own time.  They were creating self-governing enclaves known as “private places” whose streets and common gardens were owned by the residents, gated, and patrolled.  One of those was Washington Terrace, a private place near in the Central West End of St. Louis.  There in 1908,  Shaughnessy built a three-bay, two story mansion in the Tudor Revival style at No. One.  A carved foliated cartouche over large front doors proudly bore that address.  Shown here at the right of the spectacular gatehouse, the still extant Shaughnessy mansion is on the Historical Register.

Shaughnessy maintained his whiskey business even as prohibitionary forces were shutting down his markets.   According to directories, his firm made a last office move in 1916 to 118 North Third Street and then was forced to shut down about 1919 as National Prohibition loomed.  Club House and other Shaughnessy brands disappeared.   The 1920 census found Agnes and Martin, now age 62, living alone in their mansion with three servants. Although Shaughnessy gave his occupation as “none” to the census taker, he actively was looking after his considerable real estate holdings in St. Louis.

Martin died six years later in September 1926.  A Roman Catholic, he received a Requiem Mass and was buried in Section 18, Lot 294, of Calvary Cemetery in St. Louis.  Agnes would join him there 19 years later.  Their joint gravestone is shown here.  Although the stone carries no epitaph, Reedy’s Mirror, a St. Louis periodical, earlier had described Shaughnessy thus:  “…A leading citizen and an extensive owner of real estate, a patron of the arts, a supporter of many charitable movements, and a man who performs religiously the duties of citizenship.”   Martin Shaughnessy, I would add, also had dealt successfully with fires inside and out.

Note:  Much of the information provided here was derived from the National Park Service “statement of significance” required to place the Martin Shaughnessy Building on the National Register of Historic Places.  The form was prepared by Matthew Bivens, researcher, and Carolyn Toft, executive director, for the Landmarks Association of St. Louis.