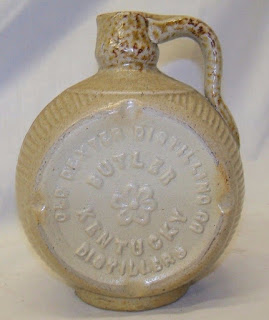 The unusual stoneware jug shown above once held a nationally known whiskey named “Old Dexter.”  Three men were responsible for giving it to America.  Two of them were named Dexter, — Edmund J. and Edmund J. Jr.   The third was Owen J. Carpenter.  All three operated in and around Cincinnati before National Prohibition. 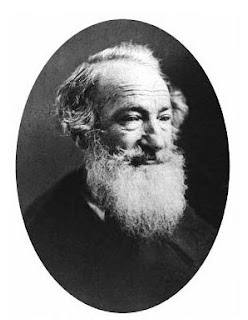 Edmund Dexter — The Founder.   Shown left with a flowing white beard is Edmund Dexter in whose memory “Old Dexter” was named.   He created a thriving liquor business in Cincinnati, perhaps as early as 1826, just twenty- three years after Ohio became a state.  An immigrant and a Unitarian in religion, Dexter had been born in England in 1801.  The exact year of his arrival is unclear but his first residency was in New York City.  From there he moved to Cincinnati where he may have been involved in the liquor trade working for one of the many local dealers.

When Dexter established his own liquor business is not clear.  A 1870s ad would indicate a beginning as early 1828.  Certainly by 1839, he was was well established and thriving, accord to historical records.   In 1829, Dexter married Mary Ann Dellinger, a New York-born woman several years younger than he.  They would have five sons:   Charles, born in 1830;  Edmund Jr., 1835; George and Julius, 1840, and Adolphus, 1844.  As his boys matured, Dexter brought them into the liquor business, eventually calling it Edmund Dexter & Sons. 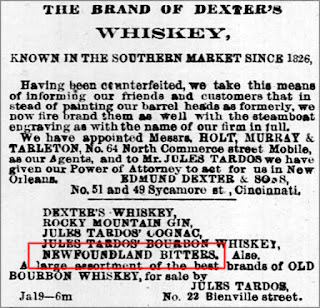 Dexter was a rectifier, not a distiller.  He bought barrels of raw whiskey from numerous sources in Ohio and Kentucky,  blended it on the premises of his 49-51 Sycamore St. store, put it into kegs or jugs and supplied saloons, restaurants, grocery stores, and other places selling liquor.  Brands names associated with Dexter whiskey included “Arlington,”  Homesdale Rye,” “Quaker Seal,” “Target Rye,” and “Old A. Keller.”  The company’s flagship brand was “Dexter’s Whiskey,”  prominent in its advertising.   His customers seem to have been in the South and West, including cities like New Orleans and St. Louis, as well as in the vicinity of Cincinnati.

By 1939, Dexter’s enterprise was accounted one of Cincinnati’s leading wholesale liquor house.  Local media said of him:  “He had been in America long enough, and had been financially successful enough, to have developed contacts all the way to Washington, D.C.”  This comment referred to his ability to get Congress in 1850 to pass a bill providing him with financial relief for a shipment of his brandy that had been lost while he was on the hook for warehouse charges in New Orleans. 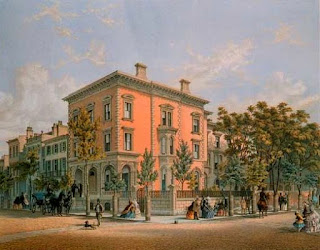 The 1860 census which asked about personal wealth indicated that Dexter, in today’s terms, was a millionaire several times over.   The symbol of that affluence was his mansion at the corner of Fourth Street and Broadway.  Shown here,it is said to have been a premier showcase in Cincinnati.  There Dexter was able to host such notables of the time as Charles Dickens in 1842 and the Prince of Wales (later King Edward VII) in 1860.

This estimable whiskey man, despite his notable long white beard, was not destined for a long life and died at the age of 61 in July 1862.  He was buried in Cincinnati’s Spring Grove Cemetery.  The memorials to him were many, including this: “One supreme good fortune attended him in his death.  There were no animosities, no jealousies, no wounded vanities of the human heart, excited by his life, to find burial in his grave…His equable temper gave a uniform kindliness in his bearing to all.”

Edmund Dexter Jr. — The Inheritor.  Although all of Edmund Senior’s boys took a hand in the liquor business, the reins of management after the father’s death came to the second born, Edmund Jr.  At the time he was 27 years old and newly married to Emma Rowescroft, the daughter of Charles Rowecroft, a lawyer and for many years the British consul in Cincinnati.  Several of his brothers were also on hand to help with the company their father had built. 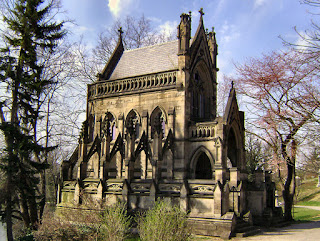 Although Edmund Jr. continued to call the firm, Edmund Dexter & Sons, he is credited with altering the name of the flagship brand from “Dexter” to “Old Dexter,” in honor of his father.  With his brothers he also spearheaded another memorial — this time  funding a family mausoleum  The Dexters hired a renowned Cincinnati architect James Keys Wilson to design and build a magnificent Gothic Revival monument in Spring Grove Cemetery. Said to be modeled after England’s Chichester Cathedral, it was complete with flying buttresses, catacombs, and a marble-lined chapel.

Shown above, the sandstone structure still stands.   From the outset it was a local attraction.  On its inaugural day in 1870 the family allowed the public to see inside before the mausoleum was closed off forever.   According to news stories of the time, thousands of Cincinnati residents in buggies swarmed to the cemetery for a glimpse.  Not long after Edmund Senior was re-interred there. Today four generations of Dexters lie inside.

For eighteen years Edmund Jr. successfully guided the fortunes of the family liquor firm, building its reputation and expanding its customer base.  Recognized for his business acumen, he was elected Vice-President of the Cincinnati Chamber of Commerce in 1874 and re-elected in 1875.  He might have been in line to chair that important group when in March 1879, he died at only 44 years of age.

By this time, Edmund’s brothers were embarked on their own careers.  The eldest, Charles, was a gentleman farmer and a published poet.   Julius, embarked in politics and business, became so rich that he stopped accepting compensation for his work during the last 20 years of his life.  George and Adolphus also were wealthy in their own right.  Accordingly, the Dexters determined to shut down the Sycamore Street store and in 1880 sell the rights to their nationally known brands of whiskey, including “Old Dexter.”

Owen J. Carpenter — The Innovator.  The man to whom the Dexters’ sold, Owen Carpenter, was a Kentuckian through and through.  Born in Boone County in 1854, his ancestry is said to have numbered among its members “some of the most valuable and interesting of the Blue Grass pioneers.”

With origins in Virginia his kinfolk were ministers and farmers, the latter including his father, Caleb Carpenter.  His mother was Zeurilda (nee Utz) Carpenter. Owen received a “common school” education and was about 18 when Caleb pulled up stakes in Boone County and moved to Covington to open a wholesale liquor business.

About 1872, Owen joined his father in the trade, working beside him until Caleb’s death in 1879.  At that point he joined with his brother, David, in a whiskey dealership located at 129 Pike Street in Covington.  In 1886, David Carpenter departed, leaving Owen the sole proprietor.  The same year the company moved to 15 West Seventh Street.

In 1883, at the age of 29, Owen found a wife.  His bride was Martha “Mattie” Adams, a native of Missouri who had been brought as a infant to Versailles, Kentucky, at the time of the Civil War.   Her father was William W. Adams, a prominent livestock trader in Lexington.   Owen and Mattie would have two sons, William A.  and Owen C.  The latter tragically died at the age of seven. 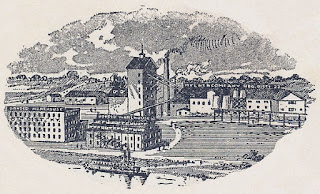 Carpenter was not content with simply running a liquor store.  He desired a steadier supply of raw whiskey for his blends, chiefly Old Dexter and Carteret Club, both which he trademarked in 1906.  As a result, he sought a distillery.  The one he found, shown above, was close at hand to Covington, designated in Federal records as RD#22, 6th District. It was located two miles south of Butler Depot, Kentucky, on Butler Pike at Flower Creek. 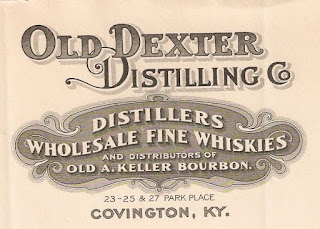 Insurance records compiled in 1892 suggest that the distillery was of frame construction with a shingle roof that stood forty feet from a sawmill.  The property also included one bonded warehouse, also frame and shingle roofed, located 100 feet south of the still. By 1890 the name had been changed to “The Old Dexter Distillery” and the Covington office listed for the distillery was Owen Carpenter’s address. The extent of his investment in the facility, however, is not clear.  By the mid-1890s the distillery was mashing 24 bushels a day and had warehouse capacity for 450 barrels, expanded to 600 barrels by 1910.  Carpenter had found steady flow of product for Old Dexter whiskey. 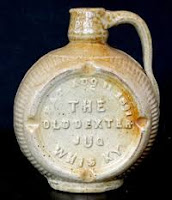 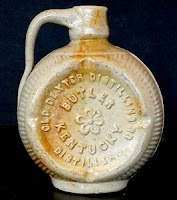 He also was innovating a container for his flagship brand.  As shown above and here, Carpenter pioneered a unusual looking salt glaze stoneware jug.  One side has a flower motif in the center, surrounded by a legend that reads, “Old Dexter Distilling Company…Butler Kentucky.”  The other says “The Old Dexter Jug Whiskey” and notes that the design was trademarked on Aug. 11, 1893.  There are four grooves in each side that have suggested to some that when drained of its contents, the jug was to be turned on its side and used as an ashtray.

These jug must have been produced by the thousands and are quite commonly found for sale at bottle shows and online auction sites.  Less commonly seen are Carpenter’s labeled bottles of Old Dexter Rye and Old Dexter Bourbon.  The elaborate label illustration depicted a Kentucky scene with barrels and glass embossing that read “Warranted…Perfectly Pure.”  The bourbon also merited a shot glass from Carpenter. 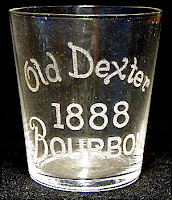 As the forces of Prohibition began to tighten in Kentucky and elsewhere, Carpenter expanded his business savvy to other endeavors, turning to real estate development.  A commentator below suggests that he had sold the distillery by 1897.

Carpenter became known as the “Father of Fort Mitchell,” a suburbanhousing community that was said to “boast of some of the finest residences in this section of the country.”  He had bought the land, platted it, and arranged for trolley transit from the development to Covington.  He also was an organizer and later president of the Kenton Water Company that built another suburban development called Latonia. 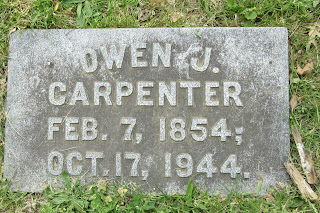 About 1917, with statewide prohibition in Kentucky,  Carpenter was forced to shutter his store and the Old Dexter Distillery at Butler was shut down.  Carpenter continued with his real estate enterprises until retiring.  During that period he saw the advent of National Prohibition, its repeal in 1934, and the return of whiskey-making and selling in Kentucky.  In 1944 Carpenter, age 90, died at Fort Mitchell, the community he had innovated, and was buried at adjacent Highland Cemetery.  His gravestone is shown here.