The Ripys of Kentucky: “From Father to Son Since 1831" 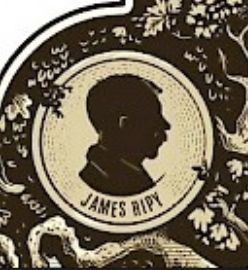 That slogan was adopted in the latter part of the 19th Century by the Ripy distilling interests to emphasize the heritage of their bourbon.   Although the validity of the date might be questioned, father and son, James Ripy and Thomas B. Ripy,  combined to create what once was reputed to be the largest whiskey-making operation not only in Kentucky, but in the world.

The Rippey family were Hugenots, French Protestants who fled their homeland under persecution and settled in Northern Ireland where they found a welcome.  James Rippey was born there in March 1811.  While still in his teens, James, with  a brother, John, and sister, Eliza, left Ireland and family members in 1830 to seek better opportunities in America.   Entering through the port of Philadelphia, the trio eventually found their way to Lawrenceburg, Kentucky. 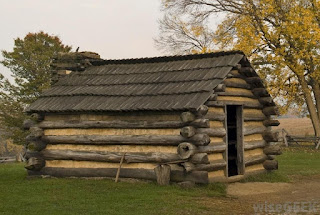 Initially the Rippeys lived in a wooden cabin in a small community below what is now known as Wild Turkey Hill in Lawrenceburg, perhaps similar to the one above.  James became a clerk in a dry goods store, proved to have a knack for business, and before long was operating his own mercantile establishment.  He counted among his customers the many small distillery owners of Anderson County who may also have been supplying him with whiskey to sell.

The year 1839 was a pivotal one for James:   He went before a court in Bourbon County, Kentucky, renounced his British citizenship and became an American as “James Ripy.”  Although his naturalization papers say he appeared to be about 24 years old, assuming his birth date was 1811, he was several years older than that.   Family lore provides two different reasons for the change in spelling James’ name. One is that a sign painter hired to render a sign for his store ran out of room and so shortened the spelling.  A second version is that the immigration official who processed his paper work in Philadelphia spelled it that way.  In any case the spelling stuck.

That same year James married Artemesia Walker, a woman about his own age who had been born in Kentucky, the daughter of a prominent local family.  The couple would have two sons who survived to adulthood.  The eldest,  James P., served in the Confederate cavalry, married into the family that produced Bond & Lilliard Whiskey, and became a distiller.  The younger son, Thomas Beebe (T.B.) born in 1847, was given a good education, attending the Kentucky Military Institute in Louisville, the oldest private military school in the U.S.  Later he would attend Sayre Institute in Frankfort.

The senior James Ripy, enriched by his mercantile business, had taken a increasing interest in distilling. As early as the 1850s a small distillery had been established on the banks of the Kentucky River four miles east of Lawrenceburg.  About 1868 the operation was taken over by a group of local businessmen, among them the 53-year-old Ripy.   Before long the distillery successfully was mashing more than 100 barrels of grain a day — significant capacity at those times.

This arrangement proved to be short-lived as within months the owners decided to sell.  The buyers were Judge W. H. McBrayer [see my post of October 2011] and young Thomas “T.B” Ripy, the latter likely financed by his father.  By the following year, McBrayer had departed and at the tender age of 21 Thomas became the sole owner.  He would operate the plant under the names “T. B. Ripy Cliff Springs Distilling Co.” and “Anderson County Sour Mash Distilling Co #112.” 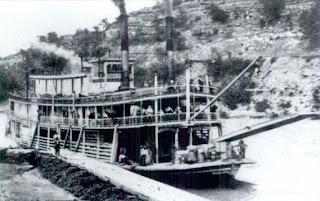 Thomas renamed the site of the distillery, earlier called “Steamville” because steamships on the Kentucky River landed there.   Now the location became “Tyrone,” a tribute to the province in Ireland from whence the Ripys had come.  Before long Tyrone became a bustling town of 1,000 residents with stores, a post office, and a port for excursion boats from Frankfort.  A photo shows one approaching the town.

As T.B. Ripy was rising to the top of  Kentucky distillers, his father was faltering.  After moving the Ripy family into whiskey-making prominence, James Ripy had experienced some health setbacks.  These must have been difficult times for Artemesia and their sons.  In June 1872,  James Ripy, only 61 years old, died and was buried in the Walker Family Cemetery near Lawrenceburg. The founding father had come a long way from his roots in County Tyrone, Ireland. His monument is shown here.

Two years after his father’s death, Thomas, now 26, married Sally Fidler, daughter of a prosperous local family with extensive land holdings.  They had ten children who lived to adulthood and another who died in infancy. Sally became affectionately known as “Ma’am Ripy,” described as “a tiny lady, with a sharp mind and keen sense of propriety.”  A relative described her in her elder years:  “She sat in her chair to the right of the fireplace in the parlor, frequently cautioning her children and grandchildren to ‘Love One Another,” as the Ripy men engaged in their favorite pastime — argument.” 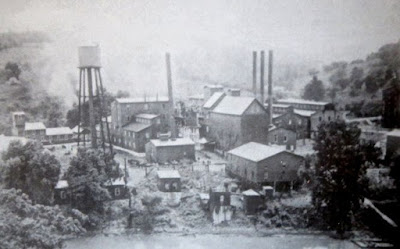 By 1873 Thomas Ripy had torn down some of the original Cliff Springs buildings and replaced them with sturdier structures, shown above. Insurance records indicate that the distillery was brick with a metal or slate roof.   Of the three warehouses, one was brick, stone and ironclad, a second was iron-clad, and a third frame and iron clad.  All had fire resistant roofs.  A cattle barn and a shed also were on the property.  As a result of the renovations, mashing capacity of the distillery was increased to 600 bushels daily.

Harking back to his immigrant father’s foray into distilling, Ripy coined the slogan for his products:  “From father to son since 1831.”  Although that year makes a clever verse, the date is a bit misleading.  James Ripy had arrived in the U.S. by that time but was just getting established in Kentucky, likely selling whiskey but not making it.  The turn to distilling occurred in 1868 when James and partners bought the small plant at what later became Tyrone.  Perhaps Thomas could not find a suitable rhyme for the actual beginning of the Ripy whiskey dynasty. 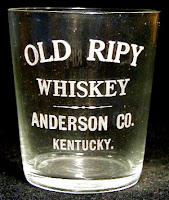 Thomas continued to seek new opportunities.  In 1881 with partners J. M. Waterfill & John Dowling he built the Clover Bottom Distillery #418 at Tyrone.  Insurance reports indicate that this distillery was a four-story brick building with two frame warehouses with metal roofs, one located 101 feet east of the still and another 112 feel west.   A frame barn, where the spent mash was fed to cattle, was 750 feet northwest of the distillery.  In 1885 Ripy bought out his partners and expanded mashing capacity of Clover Bottom to 1,500 bushels daily.

Before his career ended, this Ripy had a hand in several different Kentucky distilleries.  In addition to the two located in Tyrone, at various times he owned  the Belle of Anderson Distillery that he sold almost immediately and the Old Joe Distillery at McBrayer, Kentucky. He sold that plant to Wiley Searcy, whose name it took. [See my post on Searcy, June 2013.]  Employing hundreds of local folks, as shown above, Ripy’s Tyrone facilities alone made him the largest distiller in the state and, according to claims, at the time the largest distiller in the world. 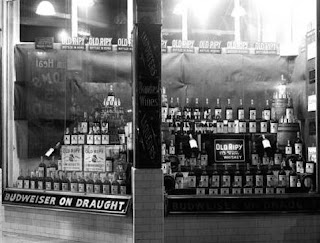 Along with quantity, Ripy was providing quality in his whiskey.  When the State of Kentucky had to select one distillery to feature at its exhibit at the 1893 Chicago World’s Fair, his was chosen among 400 potential claimants. The front windows of a Salt Lake City 1900s liquor store in which the entire display is “Old Ripy” whiskey, give an idea of the national scope of the company sales.  Although it is difficult to date any specific “Old Ripy” bottles or giveaways, the several scattered though this post give an idea of the many products over time that carried the Ripy name. 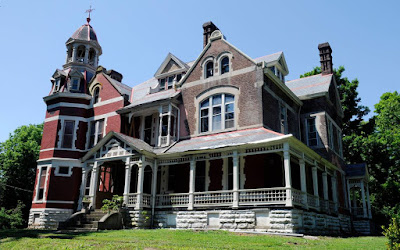 As their family grew to ten children, Thomas and Sally determined to build a house in Lawrenceburg able to accommodate them all.  The result was an imposing mansion, shown above, completed in 1888, sitting on 100 acres near the center of town.  Five years in the building, the new home and grounds contained many features rare at the time including a carbide lighting system, indoor plumbing, a tennis court and a swimming pool.  The T. B. Ripy house has been called “…A work of art that is also a definitive piece of American history, representing the people who lived and defined the American Dream.”  In 1980 the house was placed on the National Register of Historical Places.  The Ripy family sold it in 1965 but descendants in 2010 have repurchased and repaired it.  Today the mansion is a Kentucky tourist attraction. 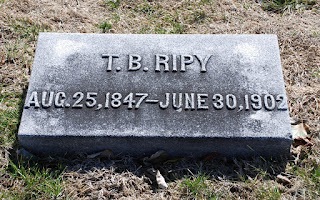 In the spring of 1899,  perhaps in declining health, Ripy sold his Tyrone distilleries to the Kentucky Distilleries and Warehouse Co., better known as the notorious “Whiskey Trust.”   He died two years later at the age of 55 and was buried in the Lawrenceburg Cemetery.  His gravestone is shown here.   The sale of the distilleries may have met with opposition from Ripy’s older sons who were working for their father in various capacities and might otherwise have inherited the business.  Sons Ezra, Ernest, Forest and Robert subsequently opened their own distillery near Tyrone and operated it under the name “Ripy Brothers.” until Prohibition.

After Repeal Ripy’s sons and grandsons continued to be active in the U.S. whiskey industry.  Several sons operated the Hoffman Distillery near Lawrenceburg and bottled “Old Hoffman,” “Rip Van Winkle” and “Ezra Brooks” whiskeys.  Another son, E.W. Ripy rebuilt the Ripy Brothers Distillery near Tyrone.  Two of his sons, T.B. Ripy III and E.W. Ripy Jr., were engaged in that enterprise.  Subsequently the distillery was sold to Austin Nichols whose Wild Turkey distillery at Lawrenceburg would become world famous. 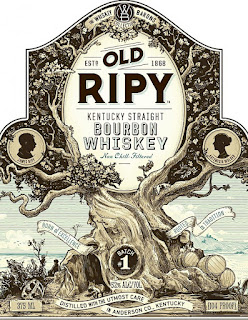 Schenley owned the Ripy trademark for a number of years, marketing whiskey under that name after Repeal.  More recently, Wild Turkey, operating in the vicinity of the original Ripy distilleries has registered labels, among them one that features silhouettes of James and Artemesia Ripy, the progenitors of this famous American whiskey clan.  The distillery to date has not yet marketed a whiskey under the name.  It should.

Note:   During the researching and writing of this post, through the good offices of a friend, I was put in touch with Mr. Beebe Ripy, a descendant of James and Thomas and a man knowledgeable about family history.   He was gracious enough to read my initial draft and give suggestions for corrections and additions. I am most grateful for his prompt and valuable help.