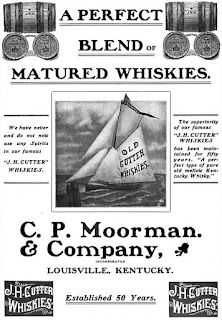 On February 27, 1875,  John F. Cutter stormed into the offices of liquor wholesaler Charles P. Moorman, his father’s former business partner,  and threatened him bodily with a sword cane unless Moorman stopped claiming a monopoly on the use of the Cutter name on Kentucky whiskey.  The events that had brought things to such a violent conclusion — one that would end in John Cutter’s death — is a story that spans America from coast to coast.

The Cutters originally were from Hollis, a town in Hillsborough County, New Hampshire, the offspring of Phebe Jewett Tenney and Benoni Cutter, a farmer.  The couple had several sons among whom was John Hastings Cutter, born in 1807.  He was only age nine when his father died and he was left in the care of his widowed mother.  Speculation is that older brothers,  R. B. Cutter and Ben B. Cutter determined to make their fortunes further west and fetched up in Louisville, Kentucky, where they entered the liquor trade.  When John was old enough to make the journey, he joined them there. 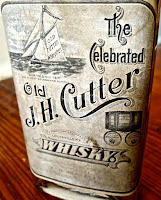 Because whiskeys exist with the initials of each Cutter, the Wilsons in their book on Western bottles speculate the following:  “As each member of the Cutter family matured in the liquor business he evidently had the right to formulate a brand in his own name.”   They dated R.B.’s whiskey from the early 1850s and discontinued in the 1860s;  Ben’s from the early 1860s to the mid-1880s.  John H.’s proved the most successful with his brand, beginning in the late 1860s and running until National Prohibition.

The Cutters did not own a distillery and are reported to have obtained product from at least two Kentucky whiskey-makers.   One was a plant owned by Mary Dowling at Lawrenceburg (RD #59, 8th District ).  The other was the a distillery (RD #241, 5th District) owned by W. B. Samuels, located at Samuel Depot in Nelson County on the L&N Railroad. The Cutters were “rectifiers,” blending whiskeys according to formulae reputedly kept within the family.

In 1858, John H. Cutter made the fateful decision to merge his by-then established whiskey firm with that of Moorman.  Moorman was a native Kentuckian, born in Breckinridge County in 1829, the son of  David M. and Judith Venable Moorman.  Some 22 years younger than Cutter, Moorman had come to Louisville as a youth, clerking in a liquor house.  By 1855 he had obtained sufficient knowledge and financing, with a partner, to open his own wholesale whiskey business.  Successful from the outset, in 1857 he bought out his partner and the following year joined forces with Cutter.

A junior partner after the merger,  Moorman soon was joined by a second junior partner, Milton J. Hardy, Cutter’s son-in-law.  Hardy became the firm’s East Coast representative, stationed in Boston and marketing the Cutter whiskey line.
Meanwhile, John H. having made his fortune in Louisville, returned to Hollis, the home of his childhood.  The 1860 census found him there with his wife, Susan, six children, three servants, and five field hands.  Although his occupation was listed as “bourbon whiskey manufacturer,”  Cutter actually was occupied as a gentleman farmer and New Hampshire legislator.  Not recorded in the household was son John F. Cutter, 23, by that time likely involved in the family whiskey business in Boston. 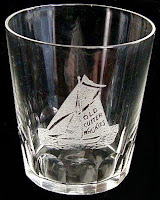 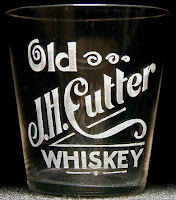 That same year, 1860, John H. Cutter died at the relatively young age of 53, the cause given as “disease of the liver.”  He was buried in South Cemetery near his home place in Hollis.  His passing triggered significant changes in his company, allowing Moorman to buy a controlling interest in the J. H. Cutter brand.  Now the focus shifted to the West Coast and San Francisco.  According to the Wilsons:  “To the Eastern folks that came around the Horn or made the trek to the West in the early pioneering days, the J. H. Cutter brand name was already well known and popular with westerners from the time the first barrel was shipped to California.” 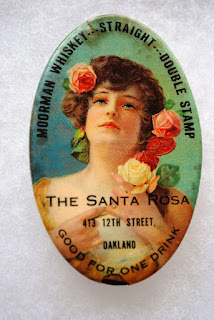 In the early 1870s Moorman’s interest in whiskey appears to have waned.  This may have coincided with his marriage to Kentuckian Lucy Beckley, the daughter of John and Elizabeth Long Beckley, and the birth of their first child, a boy. Moorman’s turned to banking as the vice president of the Kentucky National Bank.  He also was running a commission house in non-whiskey merchandise.  Milton Hardy assumed managerial control of the liquor company, emphasizing markets in the West, especially California.  In 1874 he bought the controlling interest from Moorman, who came to regret his decision and three years later returned to the whiskey trade.  He cut a deal with Hardy in which Moorman became the sole owner of the J. H. Cutter brand name and the two men broke off their formal business relationship.

The arrangement proved problematic.  In the interim,  John F. Cutter, the son, had entered the picture.  He had developed a whiskey of his own formula and marketed it under the label, J. F. Cutter.  Confusion between the two brands was inevitable.  Moreover, the company in the past had used several agents for their West Coast operations, among them E. Martin and Anson Hotaling.  After the split with Hardy, Moorman favored Hotaling, one of San Francisco’s strongest liquor houses, but John F. hooked up with Martin, moving into his offices in 1871 and for four ensuing years supervising merchandising and sales to insure the “J. F. Cutter” brand was well established. 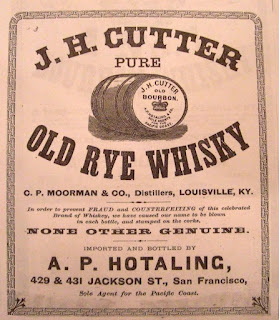 Hotaling, as the sole West Coast agent for J.H. Cutter whiskeys, was enraged.  Highly competitive, in 1871 he earlier had convinced Moorman to sue the West Coast agent for Jesse Moore for trademark infringement simply because it was shipping its whiskey from Kentucky to California in barrels similar to those of J. H. Cutter.   A San Francisco judge found the charge ludicrous, dismissed the complaint and charged Moorman court costs.   Hotaling also continually pressured Moorman to sue Martin and John F. on trademark grounds. 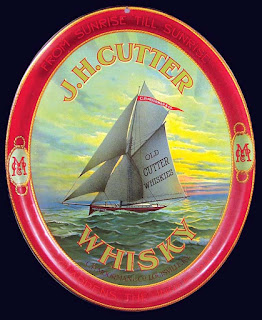 Both sides went public, telling their side of the story in long newspaper ads.  In 1872, John F. told readers:  “My whiskey is a distinct, independent article, sold under trade-mark totally different…and never has been and cannot be mistaken for theirs by any purchaser….If it has realized a more extensive sale than theirs, that fact may be owing to its quality and popularity rather than any attempt at imitation.”   Martin followed up with ads that declared that J. F. Cutter bourbon “…is superior in quality to any other brand of Cutter whiskey,”

Hotaling, on his part, accused Cutter of selling his family name to Martin for 30 years for a pittance, later insisting:  “…John F. Cutter never made any whiskey and knew nothing about it except to drink it.  He was a wild, roving, ne’er-do-well, a nuisance to his friends and of no benefit to himself…The only thing of actual value about him was the name his father gave.”

Increasingly under pressure from Hotaling and Moorman,  John F. sued claiming that his adversaries had never bought the trademark for J. H. Cutter whiskey and that it remained part of the estate bequeathed to Cutter’s children and thus was his property.  The defendants, however,  were able to prove in court their purchase from the father before his death.  A California judge ruled that even if the trademark had remained part of the Cutter estate, John F. had no status in court because the trustees were withholding his share “owing to the erratic habits of Cutter.” 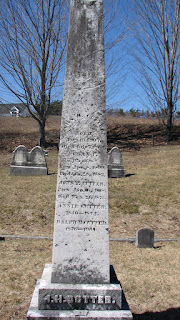 This ruling seems to have unhinged young Cutter who soon after traveled from San Francisco to Louisville, apparently in an effort to establish new business alliances.  Finding doors shut to him despite his name, John F. stalked into Moorman’s offices on that February day with a sword cane and threatened him with it.  Subdued by onlookers he was fined $100 and given a sentence of 30 days in jail.  Apparently ill, Cutter died — “miserably” said one observer — in the workhouse as he served out his sentence.  Only 37 years old at his passing, John F. was buried next to his father in the Hollis cemetery, a joint monument shown here marking their graves.

John F.’s death did little to end the West Coast competition between the two Cutter brands.  In 1885 Moorman filed suit in a California U.S. court against the owners of the J.F. Cutter brand alleging that it infringed on his trademark.  The federal judge found that J. F. Cutter labeling was significantly different from J. H. Cutter whiskey.  To argue otherwise was, the judge said: “…To my mind, the utterance of an absurdity that the senses of the most ordinary observer would at once rebuke.” He found for the defendants. 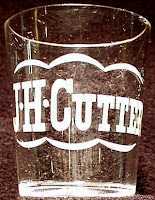 Charles Moorman died in 1917 in Louisville at the age of 88,  He was interred in Louisville’s Cave Hill Cemetery where many other Kentucky whiskey men are buried.  Moorman lies beside his wife, Lucy, who had preceded him in death 26 years earlier.  His company survived for two more years until National Prohibition. Moorman is remembered in Louisville as a philanthropist having left funds for the Moorman Home for Women to care for the elderly indigent female population of Jefferson County, Kentucky. 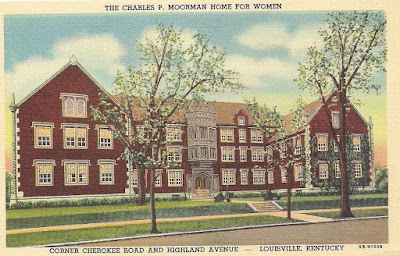 As a conclusion to this story, the Wilsons make no comment on the feud over the whiskeys, observing:  “It is difficult to say which achieved the greater sales, but suffice to say both houses did a very good job of selling the brands.   The Cutter name reined as king in the western states straight through to Prohibition.”

Note:  Much of the information about Moorman and Cutter is taken from “Spirit Bottles of the Old West” by Bill and Betty Wilson (1968).  Those interested in learning more about Anson Hotaling may wish to see my profile of him on this blog, March 29, 2013.  Mary Dowling was featured January 22, 2014.