Though beautiful Cork he had left far behind,

Yet he knew abroad there was prospect of boodle;

Inspired by this feel, he soon grew resigned,

And to keep up his spirits struck up “Yankee Doodle.”

He set about striving;

To brush up his learning,

And soon there was not in this Land of the Free,

A more wide-awake business-like Yankee than he. 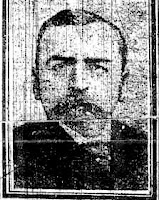 In these few lines of absolutely awful verse, the author has managed to tell in highly abbreviated form the story of Timothy David Casey, an impecunious Irish immigrant from Charleville, Cork, Ireland, who came to Pennsylvania at ten years old in 1850, arrived in Pittsburg (original spelling) in 1865, and went on to wealth and prominence as owner of the oldest liquor house in the city.  Casey is pictured here from a newspaper photo. 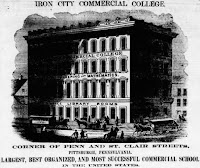 A measure of Casey’s stature is that he was among Pittsburgh elites to be included among about 300 men (no women) featured in an 1892 book by illustrator, writer and abysmal versifier, Arthur Burgoyne, entitled “All Sorts of Pittsburgers:  Sketched in  Prose and Verse.”  Burgoyne’s prose biography noted that Casey had been able to finish his education by graduating from Iron City Commercial College, an institution that advertised itself as “The largest, best organized,and most successful commercial school in the United States.”  Among immigrant whiskey men about whom I have written, few have had the kind of business education Casey enjoyed.

The Irishman apparently decided to put his learning to use in the booming oil fields of Pennsylvania, but soon became disillusioned with those prospects.  Casey returned to Pennsylvania and opened a grocery store in the adjoining town of Allegheny.  He abandoned that effort after a year and opened a grocery in Pittsburgh on Pennsylvania Avenue.  One of Casey’s principal sale items was liquor and he soon recognized the profitability of such merchandise. 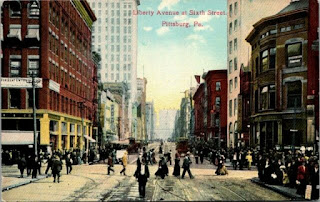 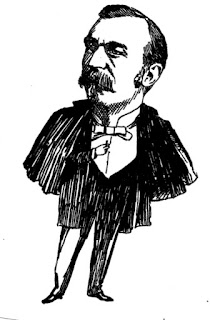 By 1868 Casey had abandoned brussels sprouts for booze, the product that would make his name.  That year he formed a partnership with Robert Woods, buying a liquor house that dated its establishment back to 1837. It was located on Liberty Street, one of Pittsburgh’s major commercial avenues, above.   When Wood retired from the firm in 1870, Timothy and his younger brother James continued their business under the name Robert Wood & Company.  Two years later Casey took Thomas Fogarty into the firm and changed the name to Casey & Fogarty.  The latter retired after about a decade as partner.  In 1881 the liquor house became known as T.D. Casey & Company.   Burgoyne pictured the sole proprietor as a dashing figure in a bow tie and black cape, smoking a stogie and posing like an 19th Century prince. The caricaturist’s doggerel narrated Casey’s rise:

"Rye whisky's the thing that'll make me a Croesus; "

Forthwith of Old Red-eye he buys up the cream,

And a lucrative trade on the instant he seizes.

And that's why to-day it's in order to greet

Him as principal Croesus of Liberty Street. 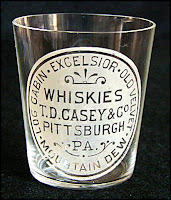 Whether Casey equalled the wealth of the fabled Roman is a matter for conjecture, but that Pennsylvania rye whiskey was his main commodity is not.  He featured it prominently in all his advertising. His labels included "Log Cabin,” "Mountain Dew,” "Old Velvet,” and “Excelsior.”  All four names are prominent on a give-away advertising shot glass.   Casey never bothered to trademark any of his brands.

Casey was not a distiller.  As a wholesaler of liquor, he was receiving shipments of whiskey from some of the numerous Pennsylvania distillers, mixing it on his premises and then selling it in ceramic jugs.  Shown below are two of his two-gallon containers that would have been filled with Casey’s blend and sold to local saloons, restaurants and hotels.  The jugs are interesting for their salt-glazed exteriors, featuring  cobalt hand-drawn applied decoration and stenciled lettering.  These ceramics would have been decanted into smaller containers at the retail level and likely returned to Casey for refilling.  The smaller jug shown here suggests he also was selling Log Cabin Rye for direct retail sales.

Through all his rise in wealth and local recognition, Casey managed to have a personal life.  In 1868 he married Margaret Joanne O’Hanlon, the U.S.-born daughter of Irish immigrants James and Cecilia O’Hanlon.  Timothy was 28, Margaret was 25.  Over the next 17 years the couple would produce ten children, of whom two died in infancy. Casey housed his family in a mansion home at 384 Beaver Avenue in Allegheny.  He also involved himself in the social and political affairs of Pittsburgh, especially the Columbus Club, an elite Democratic organization.  The record indicates he served a term as a prison inspector for Western Pennsylvania, likely a political appointment.  Some of Casey’s personal life was caught in Burgoyne’s last verse:

His house is the oldest in town, he declares.

And so is his liquor — at least, so he claims;

And the look of profound satisfaction he wears,

Shows how little he cares for Prohibitive games.

His home help to brighten,

And life, too, to lighten.

The Temperance folk up the creek wouldn't fly,

Were they half as well fixed as this dealer in rye.

The 1892 publication, in addition to detailing Casey’s domestic situation, raises the prospect of Prohibition, some 22 years before America and Pennsylvania went “dry.”  Timothy was not to see that day, dying in 1902 at the age of 62.  He was buried in Section N, Lot 104, Space 9 of St. Mary’s Catholic Cemetery, Pittsburgh.  A final word from Burgoyne:  “Mr. Casey is a man of agreeable social qualities….And stands high among the “solid men” of [the] city.” 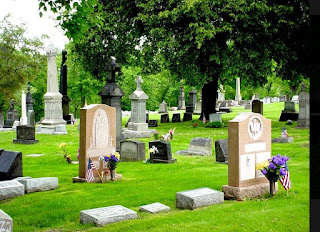 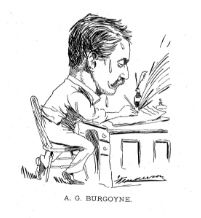 Note:  As should be evident, augmented from genealogical and other sources, the major portion of this vignette on T. D. Casey has been garnered from the 1890 publication, “All Sort of Pittsburgers” .  Author Arthur Burgoyne is pictured here in a self-drawn caricature.