Wealthy Whiskey Men Outside the Law

Foreword:  A few men who entered the whiskey trade did so from positions of wealth and social prestige in their communities.  Many more acquired their money and community recognition from the healthy profits that could be made by selling liquor.  A few individuals in each group could move toward criminality if they saw their incomes being threatened.  These are brief stories of three rich whiskey men who “went to the dark side.”

Long before the name Hollywood became identified with the motion picture industry, New Yorkers were drinking a popular brand of whiskey by that name, as shown below on a 19th Century bar token.  The liquor was the product of William Maynard Fliess, shown here.  Fleiss was a prominent New York businessman, government reformer and philanthropist whose fall from grace was intwined with his relationship to a corrupt New York police inspector known as  “Clubber” Williams.

After disdaining a career in law, the rich and well-born Fleiss in the 1870s purchased a liquor dealership in Manhattan and was mixing raw spirits at the 47 Broadway address to create the blended “Hollywood Whiskey.”  Its sales enhanced his wealth and he invested in Western mines and railroads.  He was chosen as a member of an elite committee of New York citizens investigating political corruption and appointed chairman of its law committee, a singular honor.  The resulting prestige appears to have vaulted Fliess into the upper echelons of New York society.   One writer called him:  “A thorough businessman, a good public speaker, an enthusiastic fisherman and an excellent rife shot.” 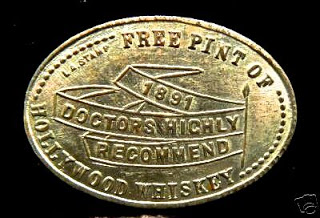 Enter Alexander S. Williams, a New York policeman who in 1887 had risen to the rank of inspector in Manhattan.  Because of his aggressive police methods including the liberal use of his night stick, he was widely known as “Clubber" Williams.  Clubber was notorious for soliciting bribes.  Just how and when Fleiss cut a deal with Williams is unclear.  Soon district police were taking great interest in the sale of Hollywood Whiskey.  Captains and detectives were introducing company salesmen to the saloonkeepers of the area with implied police protection for those who purchased it.  Many complied.  “…The Hollywood Company is said to be in a highly prosperous condition, yielding large profits,” said an investigative report.

A probe by a committee of the New York State Legislature had a particular interest in the relationship of Williams to the Hollywood Distilling Company and William Fliess.  One report suggested that Fliess had given Williams a part ownership in his company.  Others believed it was just a standard case of bribery with Clubber filtering some of the money down to his foot soldiers in blue. With committee hearings meriting daily stories in New York’s newspapers, Fliess’s standing as a businessman, anti-corruption leader, and member of New York high society clearly was besmirched.

But why would such a man stoop to deal with Clubber Williams, a known shady character?  My belief is that the liquor dealer was in financial distress, likely over the collapse of his Western investments.  Never formally indicted for wrongdoing, Fleiss faded from public view.  Almost nothing more about him appears in the public record, including his place of interment when he died in 1904 at the age of 71.

Alfred E. Norris was a certified “blue blood,”  born to well-to-do parents, well educated, a member of Philadelphia’s most exclusive clubs, and listed in the city’s high society “Blue Book.”  He lived in a mansion home where he and family were waited on by four live-in servants.   What then was Norris doing consorting with the likes of Joel D. Kerper, one of Philadelphia’s most notorious bootleggers?  The answer, as will be seen, would be found in National Prohibition. 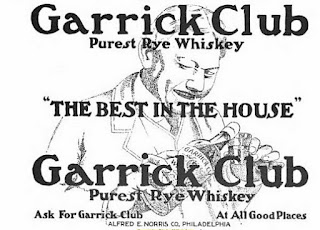 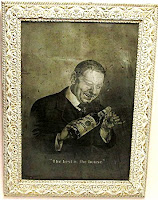 Born in 1960,  Norris, while still in his 20s with the help of family money went into the whiskey trade, establishing a Philadelphia liquor enterprise he called “Alfred E. Norris & Company.”  His flagship label was “Garrick Club,” a rye whiskey.  As an aristocrat might do,  Norris named it after one of the oldest and most prestigious men’s clubs in London.  It proved to be very popular.

Alfred E. Norris & Co and its lucrative business came to a screeching halt in 1920 with the imposition of National Prohibition.  Norris and his family then moved to New York City.  Enter Joel D. Kerper, widely known as the bootlegger who obtained illegal liquor for Philadelphia’s elites. The bootlegger and Norris partnered in a scheme in which Norris, identified as “a Manhattan broker,” sent Kerper express shipments of high grade liquor masquerading as ink, paint, olive oil and other unremarkable commodities. This arrangement was successful for years until 1929 when Hoover Administration officials began to crack down on illegal booze.

Prohibition agents who raided Kerper's establishment found liquor and a customers' list that included the names of many socially prominent individuals, including the link to Norris.  In 1929 Norris was charged with conspiring to transport liquor, a federal offense punishable by a hefty fine and a long prison sentence.  His arrest resulted from telephone orders he took from Kerper to initiate liquor shipments.  The story of the New York money man being caught in a scandal made Time magazine and newspaper headlines around the country.

The Norris’ case had many legal twists and turns.  Dogged in pursuit of a conviction, the U.S. Attorney General Mitchell took the case to the U.S. Supreme Court.  There in May 1930 the Court let stand the original indictment. On the matter of whether Norris and Kerper were engaged in a “criminal conspiracy” -- Mitchell’s underlying reason for bringing the charges -- the Supremes refused to go along. On that issue the High Court pointedly stated: “...We express no opinion.”  Norris paid a $200 fine and went home to his Manhattan mansion, fading into the mists of history. 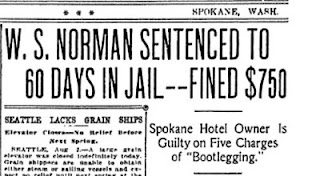 The headline in the Seattle Times of August 3, 1916, told the people of Washington that one of the state’s richest men — owner of three major hotels and other enterprises — had been convicted on charges of bootlegging, fined, and sentenced to two months in jail.  He was William Shepperd Norman, a man said to have “figured prominently in the industrial growth of Spokane city…and with limitless opportunities for accomplishment yet before him.”  What had brought Norman to this criminal conviction?

Earlier, Norman had made a name for himself by owning hotels, restaurants and serving liquor there, and selling it in stores he owned. His flagship label was “Viking,” a name he never bothered to trademark.  Norman also was a leader of the anti-prohibition lobby in Washington State.  Regardless of his opposition, a statewide ban on alcohol was enacted in 1916.  Perhaps remembering prior successes at flouting local “dry” laws, Norman continued to sell liquor from his Spokane Hotel.  Tipped off, local police raided the place and found a “sophisticated and busy” liquor business being run from a hotel room.  Norman and others involved were arrested.

At Norman’s trial a hotel porter testified the operation got its liquor by rail from a wholesaler in Butte, Montana, a state that was still “wet.” “We wire orders to Butte every noon and afternoon,”  the porter told the court.  Another employee testified:  “I asked Mr. Norman on one occasion about the legality of the (liquor) permit business as it was carried on in room 101, and he assured me the hotel was within the law. … Most of the time I asked no questions, because I thought it was none of my business what was going on in that room.”

As indicated by headline that opens this vignette, Norman ultimately was found guilty on charges of bootlegging, of permitting the illegal sale of liquor in his hotel, and of soliciting orders for liquor.  My assumption is that the judgment was appealed but I have been unable to find out whether he actually served time.  Later Norman continued to be active in business, looking after other investments that now included utilities, mining and real estate.  The millionaire executive, hotelier and whiskey man lived to see National Prohibition repealed in 1934, remaining active into his nineties.

Posted by Jack Sullivan at 9:39 AM