E. Mulligan’s sons, Edward J. and Thomas F., were Philadelphia liquor dealers, not physicists.  But when Wilhelm Roentgen in 1895 discovered a type of radiation using electromagnetic waves that could see through skin and picture bones, a phenomenon he called X-Ray, the Mulligan boys were excited.  They quickly seized on it as a name for their booze.  Thus was born “X-Ray Whiskey.”

The Mulligan story began with the birth of the founding father, Edward, in Clontibret, County Monaghan, Northern Ireland in 1838.  Of his early life little has been recorded.  He appears to have arrived in the United States at the age of 22 aboard the SS British Princess, shown below, from Liverpool to Philadelphia where he lived the rest of his life.  There he met and married Mary Brannon, of Irish descent, in 1860.  They would have two sons. 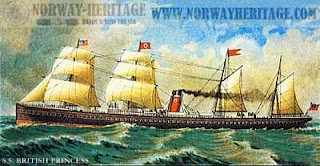 About the time of Edward J.’s birth, E. Mulligan opened a liquor house at the southwest corner of Tenth and Christian Streets, operating it for more than 30 years and becoming “well and favorably known throughout business circles,” according to his obituary in the Philadelphia Inquirer.  The newspaper added:  “His wholesale liquor business, from comparatively small proportions, of late years became very great, the bulk of his trade being throughout this and near-by states.” 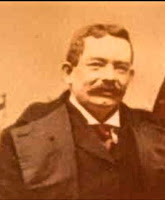 As his sons grew into manhood, their father took them into the business.  Edward J. showed up initially in city directories as a clerk in E. Mulligan Liquors, moving to the position of salesman.  In June 1875, Father Ed died, leaving Edward J., shown left, as the principal officer, assisted by brother James F., to run the liquor business.  They promptly changed the name to E. Mulligan Sons.

Meanwhile,  In 1895, at his laboratory in the Würzburg Physical Institute of the University of Würzburg, Röentgen was investigating the external effects from various types of vacuum tube equipment.   At one point while he was investigating the ability of materials to stop the rays, he brought a small piece of lead into position while a discharge was occurring. Röentgen thus saw the first radiographic image: his own bones.

About six weeks after his discovery, he took a picture—a radiograph—using X-rays of his wife’s hand. When she saw her skeleton she exclaimed "I have seen my death!”  Röentgen's original paper, "On A New Kind of Rays" was published on 28 December 1895.  It ws only a matter of a few days later that an Austrian newspaper reported the scientist’s discovery.  Immediately the word spread worldwide. 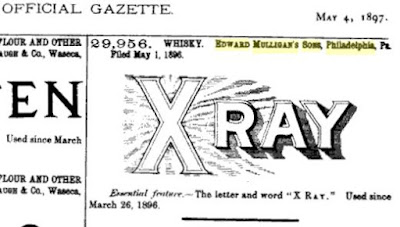 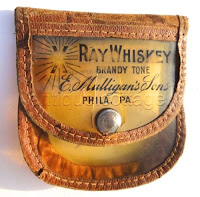 The news set off a wave of excitement, perhaps nowhere as intense as in the United States.  For those with an entrepreneurial spirit, the merchandising possibilities of the Roentgen’s discovery seemed endless.  E. Mulligan’s sons were among the first to climb on the X-ray bandwagon. Shown above is the application the Mulligans made for a trademark.  Note that they claimed use of the name beginning March 26, 1896, just two months after Roentgen’s discovery burst on world.  Just weeks later the brothers formally had trademarked the brand.  Shown below are ads the brothers ran in local publications, advertising X-Ray Whiskey as “Scientific, Substantial, Beneficial.”  They also gifted change purses with X-Ray advertising.

Before the year was out, the Philadelphia Times had published a “puff” piece for their label saying:  “Edward Mulligan & Sons…have secured the attention of good judges with their X-Ray whiskey.  It has a fine brandy tone and is forging to the front as a brand of whiskey that fascinates an educated taste.”  The Mulligans’ liquor was joined by a plethora of products from prophylactics to stove polish, claiming the X-Ray imprimatur.  Shown below are some of the goods, including two kinds of liniment (one for a horse, another for a human). 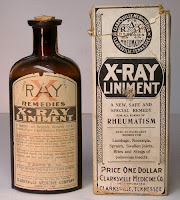 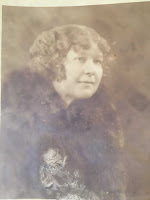 Meanwhile the brothers were having personal lives.  In May 1897, two years after taking over the management of the liquor firm,  Edward J. married in Philadelphia at the age of 32.  His bride was Isadora Nichols, shown here, a woman born in New Jersey who was seven years his junior.  A year later, a son, also named Edward was  born.  He would be followed by daughter Dorothea in 1904 and sons Francis in 1908 and Harry in 1910.  James apparently was a lifelong bachelor.

Although the brothers continued to operate a successful liquor business featuring X-Ray Whiskey, by 1910 Edward J. had moved to Atlantic City, some 60 miles from Philadelphia, an easy rail commute.  My guess is that Isadora wished to be closer to her family there.  James remained in Philadelphia, responsible for day to day operations of the liquor business.

As he entered middle age Edward J. developed a heart condition that steadily worsened. At only 51 in August 1916 he died at his home on South Texas Avenue in Atlantic City as his grieving wife and family gathered at his bedside.  His youngest son was only six years old.  Edward was buried in Old Cathedral Cemetery.  The business was carried on for a few more months by James Mulligan and then terminated.  In 1918, James was recorded as working as a bartender at 4700 Girard Avenue and living above the saloon.

The demise of X-Ray Whiskey appears to have been as swift as its rise after the news of Roentgen’s discovery.  Edward Mulligan’s sons had proven to be canny merchandisers who immediately saw the sales potential of this “scientific” liquor but it did not survive them.  Unfortunately, I have been unable to locate a bottle with an original label and am hoping some sharp-eyed reader will help me out so that one could be added to this post.  In the meantime a drawing from a Mulligan ad must suffice.

Note:  The sale of a E. Mulligan Sons ad for X-Ray Whiskey piqued my interest, leading me to an article by Edwin S. Gerson MD, a radiologist and collector who wrote about the X-ray craze for the RadioGraphic publication in 2004, an article later made available online.  In it Dr. Gerson displayed many of the products that bore the name.  The three non-whiskey illustration displayed here are from his very informative and interesting piece.

Posted by Jack Sullivan at 5:02 AM