Scott Price: From “Runt” to Riches via Whiskey

Imagine if you will that you are born late and the shortest in a family of eight sons. Your father was a well known and respected physician and Civil War veteran and your older brothers have achieved notable careers.  How do does such an individual make his mark in such accomplished company?  For James Scott Price of Chattanooga the answer was simple:  Sell whiskey with your name all over it.

His father, Samuel Vance Price, born in Georgia, at age 21 joined the state’s Sixth Infantry Regiment at the time of the Civil War.  Captured at Vicksburg with his unit, he was exchanged and later fought with the Army of Tennessee from Chattanooga to Nashville.  Earlier he had married Sarah Jane Bonds and over time sired a dozen children, including eight sons. He also received a medical degree. Suggesting some lingering effects from his wartime experience, Dr. Price died at  only 45 when Scott, as he was called, was only six.

With brothers almost two decades older, Scott early on was thrust into the world to make his way.  Like his father he married early.  At 22 in June 1901, he wed Roberta Bryan in Walker, Georgia,  She was 16.  There would be no children.  Before long Scott and Roberta would move to Tennessee where his brother Samuel Price was already established in a liquor business he called “The Chattanooga Distillery.”  Shown below is a photo of six Price brothers standing with their mother.  Scott is at far left; Samuel at far right. 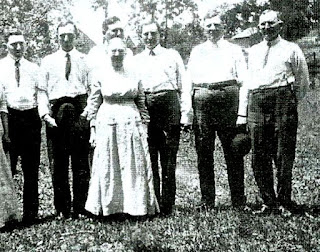 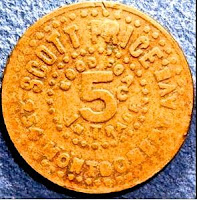 Scott initially may have gone to work for Samuel to learning liquor trade.  He first appeared in Chattanooga business directories in 1903 running his own saloon at 829 Market Street.  By 1906 he had moved his establishment to 254 East Montgomery.  A Price bar token exists from that location. The year 1910 was pivotal for Scott.  He moved from selling liquor over the bar to adding retail liquor sales, the Main Street store front shown far left below. The youngest Price son, Paul, came to work with him.  As Price Bros. they added soft drinks to their sales repertoire, likely a response to the growing prohibitionary forces in Tennessee. 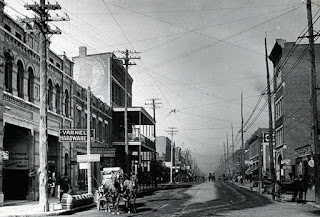 In 1912 picture gets cloudy.  A Chattanooga firm called the Lookout Distilling Company, dating from the late 1880s, appears to have been acquired by Scott, leading him to change the name of his establishment to “Scott Price Distillery.”

Some have seen the 1880 date on the certificate  to indicate the year Scott got started in Chattanooga.  Impossible.  He was one year old in 1880.  More likely that was the year Lookout Distilling originated.

A Chattanooga website may have the answer in a vintage letter published there:  “Morg [a nickname for Samuel] & Scott Price had a small distillery on Main St. in Chattanooga. They did not bottle whiskey but sold it to barrel houses [a bar with no bottles]. They paid Uncle some $250,000.00 for barrels that never went dry; filled in the day time, drained from underneath at night.“  This suggests that the so-called distillery was, in fact, a “rectifying” or blending operation.  Confusing the picture, however, the Lookout Company was a registered distiller with the federal government from 1898 to 1904.

Scott also was selling bottled goods under his own name.  Shown above are two embossed bottles of his whiskey, a cobalt half pint mini-flask and a clear bottle of similar size.  Both bear the name Scott Price Distillery and a monogram of the liquor dealer’s initials.  Below is a labeled pint flask advertising “Old Scott Corn Whiskey.”  Other house brands were “Scott’s Pure Malt,” “Old Lookout Club” and “Lookout.”  None were ever trademarked. 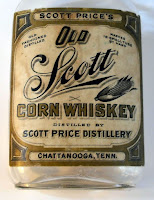 When Georgia and other Southern states went dry in 1908-1909, it was a bonanza for the Chattanooga liquor houses.  As a major American railroad center, trains rolled daily out of the city bound for the “dry” South.  They were known popularly as “jug train” because of the liquor they carried.  Scott Price was quick to seize the opportunity.   Like many whiskey men, he issued advertising shot glasses clearly aimed at the mail order customer.  Four quarts of Old Scott Corn could be had for $3.00 and the express cost was prepaid.   Scott’s Pure Malt prepaid sold for $3.90 for four quarts.  Old Lookout was $4.00. 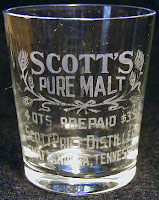 Even after Tennessee put strictures on the sale of alcohol, the jug trains, protected by the Interstate Commerce Clause of the Constitution, continued to bring their liquid in plain packages into nearby states. Although Congress in 1913 passed a law forbidding the practice, court challenges impeded its implementation for several years.  In the meantime liquor houses like Scott Price’s took advantage. 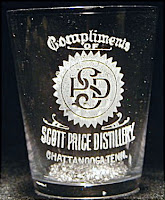 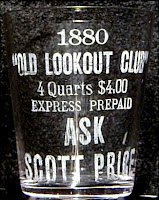 It was not until 1915, therefore, that Scott Price was forced to shut down his liquor business.  In the meantime he had become wealthy enough to purchase the mansion home shown below for himself, Roberta, and a corps of servants.  Today it stands as Kappa Epsilon sorority house for women studying to become pharmacists.  After a time without an occupation, Scott emerged in the 1820s as the president and CEO of the Chattanooga Paper & Woodenware Company.  Of it one observer said:  “There were always trucks loading and unloading there indicating a brisk business.”   The shortest of the sons of George Price and one disadvantaged by never really having a father, Scott Price had ridden the liquor trade, his name and the “jug train” into wealth and a mansion home. 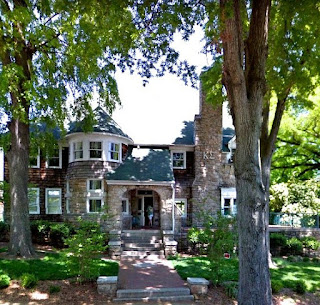 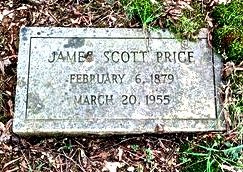 Scott Price lived to see the repeal of National Prohibition and relaxation of Tennessee liquor laws but did not restart his whiskey business.  He died in Chattanooga in March 1955 and was buried in Forest Hills Cemetery.  Roberta would join him there in 1962.

Note:  Gathered from a variety of sources, this post owes the most to Tom Carson (tcarson@ewkm.net) for an Internet article on the Scott Price Distillery. Modestly he says: “This article is not a scholarly article with all the footnotes, but is an attempt to add a little information to the history of liquor in Chattanooga.”  Additional information and photos of Price’s shot glasses are from Robin Preston’s pre-Pro site.

Posted by Jack Sullivan at 5:18 AM