Foreword:  For most whiskey purveyors, Prohibition was a disembodied force attempting to wrest their livelihood from them.  A few, however, were made specific targets of “dry” adherents.  On November 14, 2017 this blog contained the story of four such whiskey men.  This post adds another three to the list of those for whom prohibitionist zealotry became “up close and personal.”

Henry Wheeler Gillett is recorded as a Kansas man of “firsts” in several accounts.  According to the Leavenworth Daily Commercial of Dec. 31, 1871:  “Mr. Gillett rectified the first barrel of whiskey ever taken through that process in Kansas….”  Later he was reported to be the very first liquor merchant in the state to be hauled into court in 1875 as a result of Prohibition pressures.

A highly successful Leavenworth liquor dealer, Gillett was riding high in the wake of the Civil War, reputedly with annual sales in excess of $6 million in today’s dollar.  Even then the storm clouds of Prohibition were gathering over Kansas.  Shown here is one of dozens of “dry” town meetings, in a state that rapidly became a national center of attention for the Temperance Movement.  Angered by his prosperity, prohibitionist made Gillett their first target. 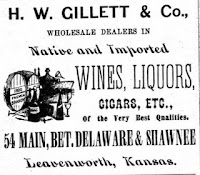 In 1875 after a Topeka resident named Haug placed an order for whiskey with him in Leavenworth, Henry was arrested under a law that forbid anyone from selling liquor “without taking out and having a license as grocer, dram shopkeeper, or tavern keeper.”  Gillett had no license in Topeka.  The Kansas Supreme Court reasoned, however, that the sale had taken place in Leavenworth and Gillett had a license there and ruled in his favor.  It was said to be the first instance of “drys” intruding into Kansas liquor affairs through the courts.

Although Gillett won his case, the experience may have suggested to him the wisdom of an occupational change.  By 1877, he had taken on two partners. The following year his name was erased from the firm entirely, as he sold out to the pair. The company would prove to have a short remaining life span.  By 1880 Kansas voters had approved an amendment to the state constitution prohibiting all manufacture and sale of “intoxicating liquors.” The liquor house Gillett founded was forced to shut down. 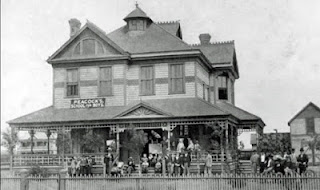 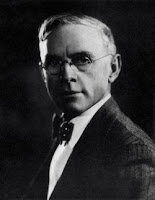 When Dr. Wesley Peacock, Sr., left, looked out the front widow of his Peacock Military Academy, above, he could see his male students creeping off campus to destinations in downtown San Antonio, Texas.  The schoolmaster knew that some were headed to saloons like the popular one run by German immigrant August Limburger.   In Dr. Peacock’s mind a plot was forming.

Oblivious of the schoolmaster’s ruminations, Limburger, right, meanwhile was operating one of San Antonio’s more upscale drinking establishments.   His success in the liquor trade was indicated by a move he made in the late 1890s to a higher visibility location just off the city’s Main Plaza. This address also brought him closer to Dr. Peacock’s Academy and put his Metropolitan saloon in the “cross hairs” of the pedagog’s conspiratorial mind.

The headmaster had noted a Texas law that required liquor dealers selling liquor to post a bond that carried penalties for selling to individuals under 21, habitual drunks, or “students of an institution of learning.”  The penalty for serving a student was a fine of $500, paid to the educational entity filing a complaint.  The $1,000 from two offenses was equal at that time to about $25,000 today.  Dr. Peacock must have cackled and clapped his hands thinking of the largesse.  He dispatched two of his students with cash to Limburger’s Metropolitan Bar.  They had doffed their cadet hats and uniforms and were in civilian clothes. Limburger himself was not on the premises to see his obliging bartenders serve each of the young men a beer.

The cadets returned to Dr. Peacock as expected and related their experience.  Then in modern parlance, the schoolmaster “dropped the dime,” hauling Limburger into Civil Court and demanding that he pay the $1,000 penalty.  The saloonkeeper’s attorneys countered that there was no way the bartender could identify the young men, dressed as they were, as belonging to Dr. Peacock’s institution.  The judge was sympathetic to the defense and instructed the jury to decide liability on the basis of whether Limburger or his employees reasonably could have known that the two young men were cadets.  The jury said “no” and Dr. Peacock went away empty handed. 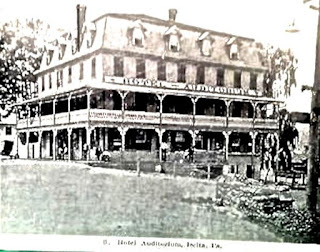 Located in York County, Pennsylvania, tiny Delta and its Auditorium Hotel had attracted the attention of the Anti-Saloon League — regrettably for Abe Trattner, liquor dealer and a co-owner of the hotel.  In the Spring of 1914, prohibitionists staged a large rally in Delta and submitted  a petition of 345 names, mostly from women, demanding that the Auditorium Hotel be denied a liquor license.  Subsequently three hundred protesters, abetted by the Anti-Saloon League, chartered a special train and filed into a York City courtroom to hammer home their point.

According to bystanders, Trattner was overheard talking to his attorney about how much the hotel would be worth if the court refused the liquor license.  His response was quoted as a curt, “Not a damn.”  Trattner’s expletive seemingly defined the stakes as the crowded courtroom was called to order in February 1915.

After several days of testimony, the judges rendered their decision, noting:  “If this were a mere question of majorities, we would, of course, be obliged to refuse this license, but the law does not permit the case to be decided on that ground alone.”  On the other side, they ruled, was the need to accommodate travelers by rail who regularly stopped overnight in Delta.  The only other hotel in town was dry, the court noted, and evidence existed that “…a large majority of the strangers and travelers stopping there prefer a licensed hotel, where liquors can be procured, to the temperance house.”  With that justification, the judges awarded the Ambassador Hotel an extension of its liquor license.

The Anti-Saloon League was outraged.  Its national American Issue magazine trashed the Ambassador Hotel as “an old frame shell” without any substantial value if it was denied alcohol sales and suggested that financial interests and political influence had leveraged the decision.  No matter, its effect was relatively short-lived.  Although the Anti-Saloon League had been bested in Delta, five years later it triumphed when National Prohibition was enacted.  Trattner’s Ambassador Hotel went dry.

Posted by Jack Sullivan at 5:25 AM