D.L. Moore: A “Distillers’ Distiller” — and Much More 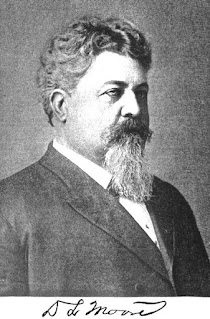 Born into a prosperous family of Kentucky gentry, well educated and eminently successful in business, Daniel Lawson Moore carved his niche in Kentucky whiskey history by fighting to keep alive the name of his father-in-law.  Moore also used distilling premier bourbon as the economic stimulus to create for himself an agricultural empire that stretched from the Blue Grass State to Mississippi and Colorado.

Among the most celebrated early Kentucky whiskey distiller was Judge W. H. McBrayer.  One contemporary account says of his “Cedar Creek” brand: “It was the whiskey that made the crowned heads of Europe turn from Scotch to bourbon.”  After McBrayer’s death in 1888 his will passed the distillery to his grandchildren.  Having married the judge’s daughter, distiller D. L Moore was their widower father.  The ninth clause of the Judge’s will stated that his heirs could run the distillery in his name for three years after his death: “After which time I desire that my name be entirely stricken from the business.” 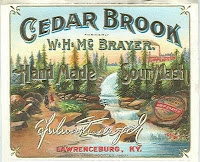 This unusual request probably stemmed from the fact that McBrayer had been an elder in the Presbyterian Church, a denomination that frowned on drinking, and personally was a tee-totaler. His widow Mary also had developed strong objections to alcohol. Moore, as manager of the distillery and with Mary co-executor of the Judge’s will, attempted to nullify the clause. He argued that the McBrayer name was worth at least $200,000 to the Judge's grandchildren (millions today). Nonetheless, Mary took him to court.

When a lower court agreed with her, Moore appealed to the Kentucky Supreme Court. The judges there were more sympathetic, apparently well acquainted with McBrayer’s bourbon. While their opinion suggested that the quality of the whiskey had suffered since the Judge’s death, they agreed with Moore that he had never intended to disadvantage his beloved grandchildren. The McBrayer name was retained.  By persisting Moore had perpetuated a Kentucky legend. 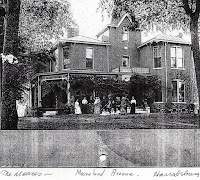 Daniel Moore was born in Mercer County, Kentucky in January 1847, from a distinguished English family.  His spacious boyhood home, shown here was called “Moorland.” His father, a physician, horse breeder and “gentleman” farmer, could afford to have young Daniel educated by private tutors, attend Center College in Danville, and study law under an eminent Kentucky barrister.  Moore passed the bar but never practiced.  Instead, according to one biographer, “…He used his legal knowledge altogether in handling his extensive business affairs.” 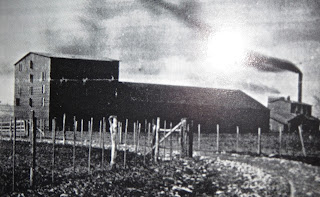 From the outset of his career, Moore was drawn to distilling.  About the age of 25, he built the distillery shown above.  It was located five miles east of the Harrodsburg Courthouse at Shawnee Run Creek on the turnpike between Danville and Pleasant Hill, Kentucky.  Distillery water originated in a pristine stream issuing from a cave where Daniel Boone famously had spent the winter of 1769-1770.  By the mid-1880s, Moore’s distillery was mashing 250 bushels a day and had two bonded warehouses with a total capacity of 12,500 barrels.

Moore dubbed the location “Vanarsdell” and called his premier bourbon the same name.  He advertised the brand extensively.  Shown here is an apparently unembossed clear quart bottle of “Vanarsdell Hand Made Sour mash” whose colorful label alone apparently made it worth $2,100 at auction recently.   Below are two views of a Vanarsdell flask, also apparently unembossed.  Another Moore brand was “Stone Wall Whiskey.”  He also produced whiskeys sold by Charles Rebstock, a leading liquor wholesaler of St. Louis. [See my  post on Rebstock at September 6, 2011.]

Following McBrayer’s death Moore sold his own distillery to the Dowling Brothers and devoted his energies to managing the McBrayer Lawrenceburg plant.  Early in the 1900s, however, Moore sold the McBrayer distillery to the Kentucky Distilleries & Warehouse Company, one of the expressions of the monopolistic “Whiskey Trust.”  He continued to manage the facility and the Trust was happy to have title to prestigious McBrayer’s bourbon. 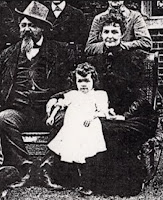 In 1891 Moore found a woman to provide mothering for his three minor children.  She was Minnie Ball, descended from the same family as the mother of George Washington.  They were married in her home in Versailles, Kentucky, and would go on to have two girls of their own.  Shown here is a portion of a family photo that pictures Daniel, Minnie and their daughter, Anita.

Meanwhile Moore was increasingly busy in other activities.  In 1881 he was elected on the Democratic ticket to represent the 20th District in the Kentucky State Legislature.  There he is said to have performed “his duties in an intelligent and capable manner and eliciting the commendation of his constituents.”  Despite being a distiller, Moore pushed through a bill levying a special tax on Kentucky whiskey to be used for schools. He also had become the largest individual stockholder in the Mercer National Bank and from 1892 to 1908 served as its president.

A “gentleman” farmer, Moore was responsible for overseeing the planting and harvesting of cotton in Mississippi on three plantations totaling thousand of acres originally accrued by his father.  He also owned several thousand acres of timberland in that state and supervised the logging.  His work there led him to built a spacious home on one cotton plantation where he, Minnie and the children spent the winter months.  Described as a “nature lover,” Moore then turned his attention to Colorado, the Rockies and the  “spiritual uplift of the mountain solitudes.”  In 1881 he bought a ranch of 6,000 acres in North Park, Colorado.  According to a biographer he then “…Introduced some of the finest cattle and horses, making it a center of improved livestock in the far West….” 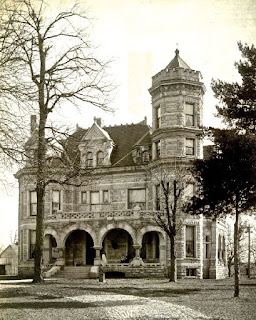 Although these activities took him away from Kentucky about half the year, Moore determined to built Minnie and their family a spectacular home on Lexington Pike near Harrodsburg, a structure, shown here, that still stands as a landmark.  Taking five years to build and costing the equivalent of $1.4 million, the Romanesque Revival mansion features a verandah of large semicircular arches on short round pillars of polished granite with carved limestone capitals.  Among its other elegant features is a four story tower crowned by a parapet.

Moore was living there when he developed heart trouble as he approached his mid-60s.  His heavy work schedule presumably had begun to catch up to him.  After several months of decline, Daniel died on October 20, 1916.  His death certificate read “organic heart disease.”  He was buried in Harrodsburg’s Spring Hill Cemetery, Section S, Lot 29, below a large cross.

For the next two decades, Minnie Moore took up where Daniel had left off, running Mississippi cotton plantations, the stock ranch in Colorado and a farm in Kentucky where she supervised tobacco production and the breeding of quality livestock.  One observer commented:  “Mrs. Moore since the death of her husband has given convincing evidence of the possession of unusual business talents and has handled her extensive affairs with admirable judgment and efficiency.”

Of Daniel Moore a fitting testimony appeared in “Kentucky: A History of the State,” by Battle, Perrin, & Kniffin, 4th ed., 1887:  The authors wrote: “Few men have more friends, or retain them better than Senator Moore….He is liberal and generous to a fault, a representative of true Bourbon Democracy, of strict integrity, and thorough honesty of purpose and deed. As a business man he has by his success in other fields reflected great credit upon his native State of Kentucky.”

To this encomium I would add that Moore’s court battle to keep the McBreyer name before the drinking public has paid dividends down to the present day.  Descendants have formed an organization called McBreyer Legacy Spirits and in limited quantities have issued a bourbon in his name.  If Moore had not challenged the Judge’s will, this welcome development might well have been impossible.

Notes:  This post was gathered from a wide variety of sources.  Unless otherwise indicated in the text, direct quotes are from “A History of Kentucky and Kentuckians,”  by C. Polk Johnson, 4th edition. 1912.

Posted by Jack Sullivan at 5:25 AM