In 1902, Minneapolis liquor dealer Joseph M. Davis, proprietor of the popular “Silver Pitcher” brand of whiskey, could sense that profits were declining.  When he investigated he found an unexpected drain on his revenues.  It turned out to be his trusted bookkeeper and company cashier, Fred Pratt.  The incident highlights a persistent problem faced by whiskey men — employees tapping the till.

Born in 1856 in St. Petersburg, Joseph, shown here, embarked from Hamburg , Germany, with his father Abraham and other family members to arrive in the United States in 1864, according to passport records.   His father changed the family name to “Davis” upon landing and settled immediately in Minneapolis where Joseph would spend the rest of his life.

Joseph Davis’ initial years largely have gone unrecorded.  Still a youngster on arrival, he would have been educated in local schools.  His early employment  may have been in the liquor trade.  In 1887 at the age of 31, he married Rose, who also had been born in Russia.  She is shown here from a 1924 passport photo.  The couple would go on to have a family of three children.

“Silver Pitcher” was his flagship label and the only brand Davis bothered to trademark.  He advertised the whiskey heavily through giveaway items provided to wholesale customers such as saloons, restaurants and hotels.  His gifts included back-of-the-bar-bottles.  As shown below, they featured a variety of shapes but all advertised Silver Pitcher Rye.  Davis could also provide a silver plated pitcher for bar use.  It was used to hold tea or water for the bartender to supply to customers upon request. 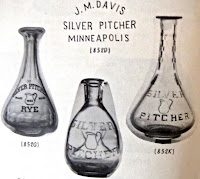 As a result of Davis’ merchandising strategies, his business grew rapidly.  Deciding he needed accounting help in the heavily regulated and taxed liquor trade, he hired a bookkeeper.   Enter Frederick “Fred” Pratt.  Born in New York City in September 1870, Pratt apparently arrived in Minneapolis early in the 1890s.  Although he was only 22, Davis hired him.  Apparently Pratt’s work performance was exemplary and by 1894 he also had been made the liquor house cashier. 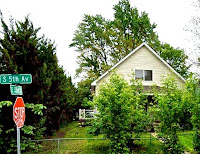 Single and living in rooming houses during his first years in Minneapolis, Fred met a local woman, Clara Maire.  They fell in love, and married in November 1896.  Their first child, Helen, was born in 1898 and a second, Frederick Jr., two years later.  This growing family increased Pratt’s financial needs, including the cost of renting a comfortable home at East 33rd Street and South Fifth Avenue, believed to be the house shown here.

With the onset of the Twentieth Century, Davis began to notice that returns from his liquor business had dwindled.  Suspicion fell on the bookkeeper/cashier.  Unwilling to confront directly an employee whose record heretofore had been unblemished, the owner hired a private investigator who subsequently presented solid evidence that Pratt had been “tapping the till.”

On April 4, 1903, Sergeant Ginsburg from the Minneapolis “Bunco Squad” arrived at the liquor house and arrested Pratt on a charge of embezzlement.  The amount he was accused of stealing was not disclosed.   Brought into court Pratt was found guilty and sentenced to three and one-half years in the penitentiary.  That venue almost certainly was the Minnesota State Prison at Stillwater, about 25 miles east of Minneapolis, shown below as it looked then. 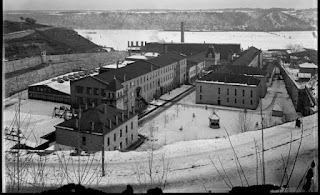 The prison was close enough for Clara and their children to visit Pratt during his incarceration, apparently standing by him as he served time.  Upon his release, the family reunited and the couple later had a third child, a son.  As an ex-convict, Pratt apparently had difficulty re-establishing himself in Minneapolis.  City directories gave his occupation as a house painter in 1908, grocer in 1910, real estate agent in 1911 and contractor in 1916. 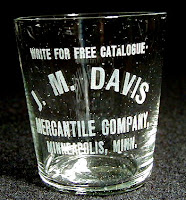 Meanwhile, Joseph Davis found his business challenges increasingly coming from prohibitionary movements.  By 1915, when some Minnesota localities had banned alcohol under local option laws, he changed the name of his establishment to the “J. M. Davis Mercantile Company” and was emphasizing mail order sales to surrounding “dry” states.  A shot glass advertised the existence of a free catalogue of mail order offerings.

It has been suggested that by adding “mercantile” to his company name, Davis was planning to continue in business with merchandise other than liquor after the imposition of National Prohibition in 1920.  Now 64 years old, however, after 30 years in business Davis retired.  He would live to see “The  Great Experiment” repealed, the Great Depression and World War Two, dying in April 1946 in Florida at the age of 89.  Joseph Davis was buried in Temple Israel Memorial Park in Minneapolis next to Rose who had died 28 years earlier.

Fred Pratt preceded Davis in death, passing in 1943.  He was buried in Lakewood Cemetery of Minneapolis, Section 3, Lot 6, Grave 9.   Whether he and Davis ever met again after Pratt’s incarceration is unknown.  Common to many aspects of American business, their entwined story of trust betrayed suggests why many “whiskey men” chose to put close relatives in positions dealing with company finances.

Note:   This post owes a great deal to a 1987 book entitled “The Bottles, Breweriana and Advertising Jugs of Minnesota, 1850-1920, Volume 2: Whiskey, Druggist, Medicine,” co-authored and edited by Ron Feldhaus. From that volume come some of the information and pictures used here.  The more recent existence of genealogical sites allowed the identification of Fred Pratt as the errant bookkeeper and helped tell his story.

Posted by Jack Sullivan at 5:00 AM