Foreword:  In reciting the line of occupations that pioneered the American West, the storekeeper often gets left out of the conversation despite the important role those entrepreneurs played in developing and civilizing life in remote places.  For many of these men selling whiskey was essential to the profitability and sustainability of their mercantile efforts.  Here are the stories of three such Western merchants.

Harry Gesus was among the Jewish pioneers who helped build the frontier American West by striving to meet the mercantile desires, including liquor, of growing populations in Wyoming, Idaho and Utah.  Henry’s efforts, however, were thwarted by greedy mine owners and exacted a high family cost in the premature death of three children.

During the 1890s, a decade of economic recession, Gesus and his wife with their five children moved west from New York City to Kemmerer, Wyoming, shown below, an upstart mining town created by finding rich coal deposits nearby.  With a brother Gesus opened a clothing and dry goods store there, soon expanding to two other boom towns in the region.  All were company-owned settlements where coal mine operators dictated many of the condition of life for residents.  Seeing the mercantile success of the Gesus family, owners pressured workers to use the company stores instead.  The Gesus stores closed. 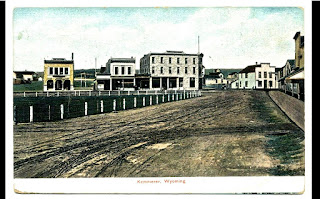 Gesus moved on to Blackfoot, Idaho, a town that called itself "Potato Capital of the World.  There he abandoned selling long johns and embraced liquor. He opened a saloon and liquor business he called the Kentucky Liquor Store, selling both at wholesale to local saloons and restaurants and at retail. Although living conditions in Blackfoot were better than Kemmerer, sanitary conditions were similarly poor.  Outdoor privies were often crudely constructed and water supplies polluted.  Doctors were few and often badly trained.  Hospitals were non-existent.  After having one child succumb in Kemmerer, two more Gesus children died in Blackfoot.

Gesus did not linger long in Idaho.  Perhaps the memories were just too bitter.  The family moved to Price, Utah, a mining settlement 120 miles south of Salt Lake City.  In Price Harry Gesas opened another liquor store, advertising himself as “The Whiskey Merchant.”  Again he was selling at both wholesale and retail, buying whiskey by the barrel and decanting it into ceramic jugs for his customers. When Utah went “dry” in 1917, Gesus made a final move to Salt Lake City, where his three children lay buried.  There he sold tobacco. Another link from Brigham Young to Valley Tan was through the large mercantile store the leader established to provide necessities to Mormons in Salt Lake City.  He ostensibly acted on the belief that non-Mormon “Gentile” local merchants were gouging his people.  Young called the establishment “Zion’s Cooperative Mercantile Institution” (ZCMI).  The store, shown below, sold Valley Tan.   That could never have occurred without the leader’s blessing. 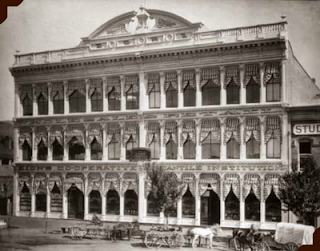 ZCMI became a formidable business force, eventually manufacturing its own of boots, shoes, and a line of work clothes. It also sold everything from housing needs, lumber, nails, and the like, to household needs such as fabric, needles, thread, food preservation products, furniture, and draperies, even some beauty products.  In effect ZCMI nearly everything the pioneers needed to survive and thrive.  Some have called this the first real department store west of the Mississippi. It continued to be church associated until 1999. 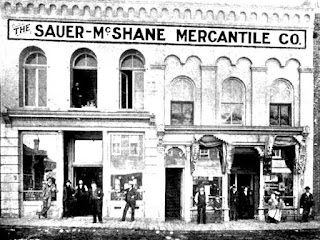 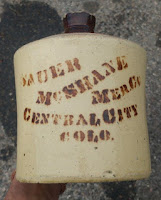 The photo above of Sauer-McShane Mercantile in Central City, Colorado, shows a several men posing on the sidewalk in front of the building.  Among them likely were Otto Sauer and John McShane, two entrepreneurs who opened the first general store in a Colorado mining town that was virtually nothing but an assemblage of wooden shacks.  With whiskey as a major seller, the partners eventually made their enterprise a retail giant.  They recognized that an immense amount of money from gold, silver and other metals was being unearthed and available in that part of Colorado.  Area mines annually were producing the equivalent value today of $75,000,000, mostly in gold, and many mine owners were exceedingly rich.

Men of wealth often had wives or mistresses that they wanted dressed in the best finery.  Sauer-McShane obliged by featuring tea and floor length dresses, laced shoes with high heels, straw and fabric hats with elaborate decoration, and bows, gloves, and brooches.  While such fashionable garb might have been available in Denver, that city was over the mountains.  Sauer-McShane could provide haute couture close to home and the male partner’s cash box.

As a result, among the store’s clientele were two of the most talked-about women of the West.  Elizabeth “Baby Doe” Tabor, shown here, was the wife of Horace Tabor, a wealthy silver magnate and future U.S senator who had divorced his wife of 25 years to marry the beautiful Elizabeth although he was twice her age. The marriage set off a major scandal in Colorado.  Baby Doe, as she became known in media coverage nationwide, had plenty of money to spend with Sauer-McShane until Tabor lost all of his in the Panic of 1893. 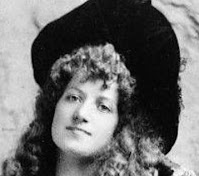 The other woman was Alice Ivers, shown here.  When her husband was killed in a mining accident in Leadville, Colorado, she was in difficult financial straits and turned to playing cards for a living.  Shown here, Alice used her good looks to distract men at the poker table.  She was also very good at counting cards and winning big pots, that helped her become known throughout the West as “Poker Alice.” Ivers always wore the newest fashion dresses, many bought from Sauer-McShane.

By 1895, the Sauer-McShane store was doing the current equivalent of $5,000,000 in sales annually.  The need for more space resulted in their building a new warehouse. It still stands today, bearing their name, and is on the National Register of Historic Places.

Posted by Jack Sullivan at 6:59 AM