Whiskey Men: The Lure & Lore of the Log Cabin

Foreword:  During the Nineteenth Century, the “old log cabin” became an icon of the genuine in America. Candidates for political office were quick to claim that they were born and raised in one.  Log cabins engendered great nostalgia for the simple virtues of the Nation’s rustic pioneer past, including neighborliness and fair dealing. The liquor trade seized upon the dwelling in its advertising.  After a quick look I have counted at least 16 different pre-Prohibition whiskey brands that referenced a log cabin.  Here are examples of five.

In a real sense, the desire of American politicians to be associated with a log cabin began with the Presidential campaign of 1840 when Gen. William Henry Harrison advertised his successful candidacy (but short-lived presidency) by the use of a log cabin as his symbol.  Actually born in a Virginia plantation mansion, Harrison later lived in a log cabin in Indiana during a failed effort as a farmer.

The log cabin shape was derived from a supposed quote by Harrison he would “rather sit on his front porch sipping whiskey than run for President.”  His opponents used the comment to slur him. As the story goes, Harrison turned the tables and offered free bottles of whiskey in the shape of a log cabin to the electorate.  Shown below the bottles, now very rare, were made in two styles by the Mount Vernon Glass Works of New York. 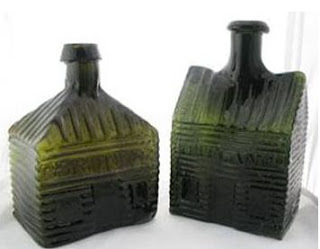 The bottle at left is blown in the shape of a cabin with a four-sided “hip roof.”  The front has the legend “Tippecanoe,” an allusion to Gen. Harrison’s success at the 1811 Battle of Tippecanoe against a Native American confederacy, a victory that in effect open much of the Midwest to settlers. The other side of the bottle reads “North Bend,” Harrison’s southern Ohio home not far from Cincinnati.  Later Edmund Booz, a Philadelphia distiller,  would issue a series of log cabin shaped bottles, shown below.  They often are mistaken for the originals. 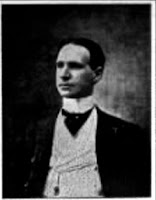 After working for others in the liquor industry, Dan Russell, shown here, had the foresight to see that the Old Times Distillery, located on Louisville’s West Broadway would be an excellent vehicle to advance his desire to be among the Kentucky “bourbon barons.”  Founded in 1869, that distillery had been brought into national prominence during the 1890s. Russell was able to buy a controlling interest and become president of the distillery.

Seeing the World’s Columbian Exposition of 1893 in Chicago as an excellent opportunity for publicity the distillery owners built a small working log cabin distillery in the heart of the fairground “between the cliff dwellers exhibit and the educational buildings.”  Shown below in a replica die-cut trade card the structure closely identified the whiskey with the rustic log structures of the rapidly expanding Nation.  The exhibit was a great success, the whiskey won a gold medal, and “Old Times” whiskey was launched as a national brand. 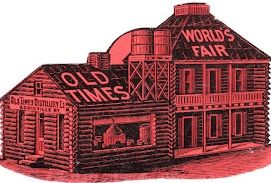 Billy Winter in Portland, Oregon, took the theme one step further.  He emerged about the turn of the century as the founder and genial proprietor of a watering hole known as “Billy Winter’s Log Cabin.”  a saloon and liquor house located on Third Street near Morrison in downtown Portland, a building crafted inside and out to resemble a log cabin.

The trade card here appears to show the sales room portion of the saloon.  It has a definite rustic frontier look.  Two gentlemen appear to be filling containers from an array of about ten large barrels lining one wall.   Each barrel has a number of whiskey bottles around it for a ready sale.  Hanging from one wall is the stuffed head of a deer. Guns and other artifacts are scattered about. 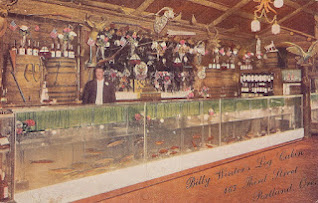 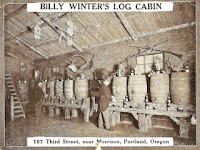 A similarly cluttered look identifies Billy’s bar on a second trade card where the owner is shown standing.  Whiskey bottles, American flags and trophy heads dominate the wooden walls, reenforcing the log cabin theme.  His flagship brand of whiskey was “The Log Cabin.”  Shown below is a clear glass pumpkinseed flask embossed with his name and the outline of a log cabin.  Given the expense of creating this container for his whiskey, Winter clearly anticipated significant sales. 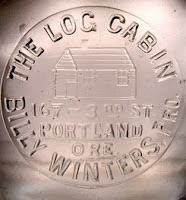 Distilling was in Arthur Philip Stitzel’s blood. His father, Philip Stitzel, immigrated in 1857 to the United States with his father and two brothers Frederick and Jacob. The Stitzel family eventually settled in Louisville where the three brothers produced bourbon.

The Stitzel brothers experimented with using wheat in place of rye in a typical bourbon recipe. Typically bourbons are made with corn, rye and barley. The change in grains was not widely done at this time, so the distillery never released a commercial version of this recipe. Instead the knowledge was passed on to Arthur when he eventually opened his distillery. 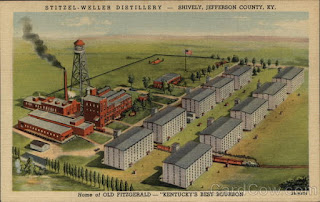 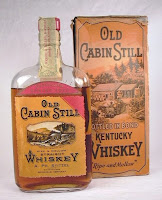 This Stitzel’s flagship whiskey was “Old Cabin Still” whiskey.  As shown here, brand featured a log cabin cabin prominently in the label, the box, and advertising.  A. Philip later would join with members of the notable Weller Kentucky distilling family to create the famous Stitzel-Weller distillery, shown above,  that survived National Prohibition and brought Julius “Pappy” Van Winkle to the fore.

After five years of operating his Louisville liquor house, a restless John Roach sold the business and began to build and operate distilleries.  Roach’s second plant was the Old Log Cabin Distillery, named for the proprietary brand of whiskey produced there.  Located on Louisville’s  waterfront, this facility included a three story still house with the capacity of mashing 600 bushels a day, two bonded warehouse that held 20,000 barrels, offices and a residence for the manager. 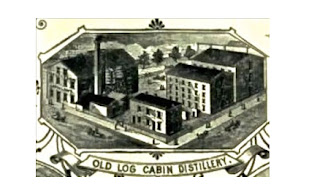 The warehouses drew particular praise from an observer:  “Here are to be seen two of the finest and bonded warehouses  to be found in the state…supplied with all modern improvements in construction, patent ricks…forming a well-ventilated pyramid of barrels….It is one of the dryest and best ventilated warehouses in the district.”

Briefly profiling just five examples of American distillers and liquor dealers using the log cabin image to sell whiskey just scratches the surface of the phenomenon.  As noted earlier, just a random look identified 16.  More remain to be catalogued .  What began as a campaign device in a 1840 Presidential campaign became a symbol of American authenticity that for 80 years marvelously served to sell whiskey.

Posted by Jack Sullivan at 5:14 AM