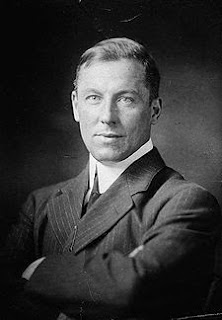 Who was Robert W. Service, that he should be considered the poet laureate of the saloon?   Why would an English-born bank clerk, wannabe cowboy, and California bordello go-fer be so honored?  The answer lies in Service, shown here, having written what is arguably the best loved, most quoted, verse in the English language set in a drinking establishment.  The poem is “The Shooting of Dan McGrew” and the site was the Malamute Saloon.

Service, whose 148th birthday was celebrated on January 16 of this year, began life in Preston, Lancashire, moving to Scotland as a child where eventually he was employed in a Scottish bank.  Struck with wanderlust, when he was 21 he traveled to British Columbia, Canada, reputedly sporting a Buffalo Bill outfit and dreaming of becoming a cowboy.  Service drifted around North America, living in Mexico and the American West, then returned to Canada where he found work as a teller in a Vancouver bank.

All the time Service was writing verses.  It was only when his bank sent him to the Whitehorse branch in the Yukon, however, that he found his true calling.  Whitehorse was a frontier town, less than ten years old.  Located on the Yukon River, the settlement had begun as a camp for prospectors on their way to join the Klondike Gold Rush of the late 1890s.  In Whitehorse, Service lived in a rustic forest cabin outside town.  Although the mining fever had subsided and mired in the dull world of banking, the poet wannabe listened avidly to stories of earlier wild and rowdy times and dreamed of having participated.

Returning from a walk one night, Service heard the sounds of revelry from a saloon, and the phrase, "A bunch of the boys were whooping it up" popped into his head. Inspired, he ran to write it down (reputedly almost being shot for a burglar).  By the next morning "The Shooting of Dan McGrew” was complete:

A bunch of the boys were whooping it up in the Malamute saloon;

The kid that handles the music-box was hitting a jag-time tune;

Back of the bar, in a solo game, sat Dangerous Dan McGrew,

And watching his luck was his light-o'-love, the lady that's known as Lou. 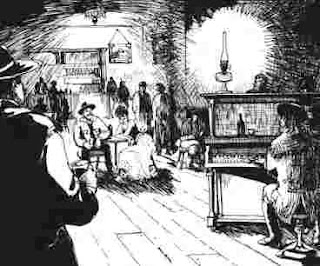 This poem has inspired many illustrations, re-printings and even motion pictures since it was written well more than a century ago.  My Father, for whom it was a favorite piece of verse, could recite it from memory, often with dramatic embellishments.  In a low growl he would intone the final words of the avenging stranger who had entered the saloon:  “But I want to state, and my words are straight, and I'll bet my poke they're true,That one of you is a hound of hell . . .and that one is Dan McGrew.”  No matter how many times I heard him recite that line, it never failed to give me goosebumps. 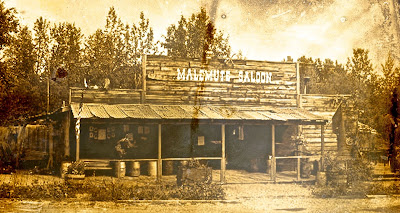 It was Service’s father who was responsible for his poetic fame.   When Robert had collected enough poems he sent them to his elder then living in Toronto.  He wanted a few booklets published for friends. Instead, His father, sensing their worth, gave them to a local publisher who also saw their commercial value and printed them as “Songs of a Sourdough.”  The American version was issued as “The Spell of the Yukon.”

Service’s book was an instant hit with the public, eventually meriting multiple printings in the United States, Canada and England.  The London publisher went through 23 printings by 1910 and 13 more by 1917.  The verses eventually earned in excess of $100,000 (equivalent to $2.5 million today).  “The Shooting of Dan McGrew” was printed solo and became the basis of two early motion pictures, as shown below.

Service’s poetic works never achieved literary approval and were often disdained by the critics.  He himself called them simply “verse.”  During his 84 years, Service published novels, articles and many more poems, but it was the burst of creativity that he achieved in a two month period in Whitehorse that has caused him to be quoted and remembered year after year.  It is amazing how quickly he composed his verses.

He said about “Dan McGrew”: "For it came so easy to me in my excited state that I was amazed at my facility. It was as if someone was whispering in my ear.” (Remember this was after someone had tried to shoot him.)  Service continued: "As I wrote stanza after stanza, the story seemed to evolve itself. It was a marvelous experience. Before I crawled into my bed at five in the morning, my ballad was in the bag.”

Although Service in other works occasionally characterized saloons as places of camaraderie, they usually were pictured in more dismal terms.  An example is his verse entitled “New Years Eve,” telling the story of a down-and-out alcoholic seeking to cage drinks on December 31 in a New York City “watering hole”: “They’re playing a tune in McGuffy’s saloon, and its cheery and bright in there….I’ll just go over and slip inside — I mustn’t give way to despair.”

Once inside and starving, the man hallucinates about a past joyous New Year’s Eve filled with love and music.  At midnight amid the celebrating, saloon patrons attempting to rouse the derelict discover he has died.

In his latter years Service and his wife lived in France where his poetry took a much more upbeat tone.  The Paris bistro, a near equivalent of a saloon as a hangout, was a favorite subject that he celebrated in verse after verse.  Living comfortably from the proceeds of his pen, Service died in France in September 1858 at the age of 85.  Shown below is his grave monument in the village cemetery at Lancieux, Brittany.  Should you visit, be sure to hurry afterward to a local bistro and raise a glass to The Poet Laureate of the Saloon. 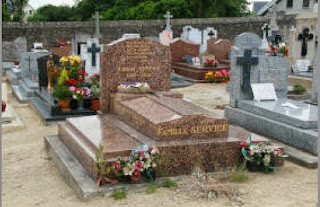 Note:   The Malamute Saloon, depicted above, was not the site of the poem but just the reverse.  Erected circa 1906, the name was inspired by Service’s offering.  My guess is that the word “malamute,” a native Yukon sled dog, appealed to the poet for its alliteration.  Located in Ester, Alaska, eight miles west of Fairbanks, the saloon remains a popular tourist attraction.

Posted by Jack Sullivan at 4:54 AM