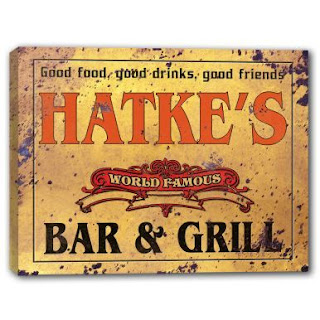 A favorite country song of mine is “My Window Faces the South,” which extols the pleasures and benefits of Dixieland.   Andrew Hatke of Richmond, Virginia, had a liquor sales window that faced the South and thereby achieved considerable prosperity.

Hatke was an German immigrant to the United States,  his birthplace in 1834 given as Hoerstal, Westphalia.   When he came to the United States is a fact not recorded in census data.  Sometimes his name was given as “Henry (Heinrich) Andrew Hatke.”  He seems to have dropped the Henry somewhere along the line.

Hatke claims to have started in business in Richmond in 1867, in the wake of the Civil War.   Richmond had suffered significant damage during the conflict and the social and cultural life of the city had been badly disrupted.  One result was a proliferation of drinking establishments.   Hatke’s saloon was among them.   The 1880 census finds him living in Richmond, with his wife,  Anna (nee Sitterding), also from German immigrant stock.  They had three

The 1880 census lists Hatke as as a grocer and barkeeper. It is likely that he was more than both.  In those days it was standard practice for grocers to be rectifying (blending) whiskey in their back rooms and offering it to the public.   Since he also had a drinking establishment on premises, the sign shown here,  it would be natural for Hatke to whip up his own whiskey from raw liquor supplied by distilleries elsewhere.

As the 19th Century progressed, more and more localities in the American Southland were  voting to go “dry,”  as a result of adopting local option laws.  If you lived in one of those towns no alcoholic drinks were easily available.  An important exception was liquor arriving through the mails.   While localities might like to keep out mail order booze, local, state, and federal courts had ruled repeatedly that such sales were legal, despite local prohibitions,  usually citing the Interstate Commerce Clause of the Constitution.

Hatke and other Richmond liquor dealers were in the right place at the right time to seize this opportunity.   Richmond was strategically placed to serve the thirsty population of the South.  The Virginia capital was a major hub for three important railroads.  The Seaboard Air Line Railroad, headquartered in Portsmouth, Virginia, had a main track that ran from Richmond, via Raleigh, North Carolina;  Columbia, South Carolina; and Savannah, Georgia, to Jacksonville, Florida.  Seaboard competed with the Atlantic Coast Line that originated at Petersburg, Virginia, and went south.

A third major competitor was Southern Railway. This line came into existence in 1894 through the merger of the Richmond and Danville system, the Memphis and Charleston Railroad,  and the East Tennessee, Virginia and Georgia Railroad.  It operated 4,400 miles of track, primarily in Dixie.   Shown here is an 1895 map of The Southern Railway listing the hundreds of town it served.  The maps of the other two railroads would show the same wide coverage.  In short, there was scarcely a Southern hamlet or town that was not available, via its freight office, to Hatke’s liquor. 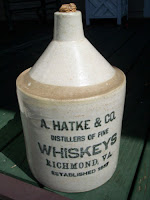 Unlike transcontinental railroads that had a reputation for price gouging,  competition along the Atlantic coast made for lower freight rates.  Moreover, Virginia had adopted a regulatory system that put fewer

restrictions on railroads.  Rail “barons” for their part were interested in maintaining the favorable  state climate and kept their prices moderated.  Hatke’s company,  incorporated as A. Hatke & Co., and located at  800-806 East Cary Street,  concentrated on mail order sales.  The U.S. mails moved rapidly up and down the East Coast insuring that a thirsty Georgia or North Carolina customer ordering whiskey from Richmond would not have to wait too long for supplies.

Hatke’s flagship brand was “Richmond Rye.” He sent some of his whiskey in embossed glass flasks, usually a dozen to a box.  More often, however, he packaged his whiskey - in ceramic jugs of quart, gallon or even two gallon size. From the striking variety of these containers we can assume he kept Henrico and surrounding county potteries very busy.  Some are in a saltglaze with dark underglaze lettering.   A variety were “shoulder jugs” with Albany slip tops and necks.   Others have brown tops with a blue cobalt stenciled label. 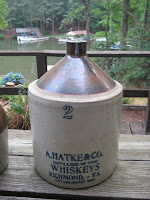 Note the wording on one jug:  “Next to the Express Office.”  Obviously a subtle guarantee that shipment would be swift.   Selling whiskey this way, however, was not without its pitfalls.  The localities with bans on alcohol frequently charged liquor dealers with an assortment of offenses with the aim of curbing the mail order traffic.   In 1913, Hatke’s  company was hailed into Superior Court of Craven County, North Carolina.   The charge was that in 1911 it had sold a case of whiskey to Carl Spencer, a local, identified as “...a minor...under 21 years of age and unmarried....”   The booze had been duly delivered via the Seaboard Air Line Railroad.  When the jury offered a convoluted decision but in the end did not convict Hatke, the judge directed a verdict of not guilty. 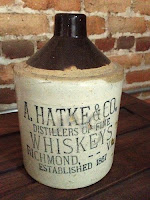 The Craven County prosecutor,  however, would not let the matter die and appealed to the North Carolina State Supreme Court.  The case was reviewed by that high court and with with only one dissent the panel of judges upheld the lower court decision.   As time passed North Carolina,  Georgia and Mississippi completely abolished all alcohol sales and the mail order business in those states meant a bonanza for A. Hatke & Company. 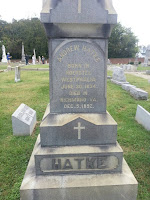 Andrew Hatke, unfortunately, was not there to witness the skyrocketing sales.  In 1892, at age 58, he died and was buried in Richmond’s Holy Cross Cemetery.  A large tombstone marks his grave.  After his death, Hatke family members continued the business under his name, probably managed by sons Henry and Lewis.  After 1910 Alphonso Hatke also was cited as a key executive in the firm.   In the end the anti-liquor forces caught up with the Hatkes.  Not only did Virginia vote statewide Prohibition in 1916, but the same year Congress passed the Webb-Kenyon Act that made it unlawful to ship liquor into a dry state or community -- a law that is still on the books.  A. Hatke & Co.  closed its “window on the South” and indeed its doors to its entire liquor business that same year.