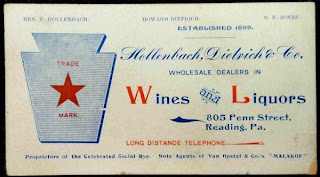 Being a driver for a wholesale liquor dealer in the late 1800s was a highly difficult and taxing job.  Before the advent of the automobile, the driver was required to manage a team of horses hauling a large wagon filled with huge barrels of whiskey and heavy crates he usually loaded and unloaded by himself.  Benjamin F. Hollenbach was such a driver and he ultimately drove himself into the ownership of the Reading, Pennsylvania, company for which he toiled. 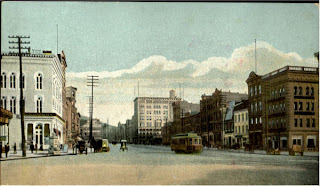 Born in January 1871 in Slatington, a small east central Pennsylvania town in Lehigh County, Hollenbach was the son of a Civil War veteran.  He was educated in the public schools of Slatington, likely a one-room school house.  We may speculate that he early had experience with the elaborate harnessing, driving and care of horses.  At an early age Ben ended his book learning to find work.  At the age of 17 in 1888 he arrived in Reading,  Pennsylvania.  There he was hired as a driver by George W. Hughes.  With a partner Hughes had started a wholesale liquor dealership in 1869,  located at 805 Penn Street, a major thoroughfare shown here in an early post card view.  He became the sole owner of the business in 1877.

Hughes obviously saw potential in the young Hollenbach as someone who handled his responsibilities with a maturity that belied his age.  Before long he brought the youth into the store as a clerk.  Two years later Hughes died and his son-in-law R. H. Jones took over management of the firm.  Not long after, however, Jones also died.   Hughes’ widow was left with a business to run and she turned to the trusted clerk.  Still in his early 20’s,  Ben Hollenbach took over running the firm.   For four years he managed the liquor dealership for the widow under Hughes name.  As the company prospered Ben saved his money and in 1900, with a partner, he bought her out and became the co-owner and senior partner of the company.

His partner was Howard Dietrich,  a Reading druggist and businessman. One year older than Hollenbach, Dietrich was was from an established Pennsylvania family, married with five children, four sons and a daughter.  By this time Hollenbach also had married.  His wife was the former Carrie Sieger of Shoemakersville in Berks County.  They had one child, Florence, born in 1894.

The partners renamed the firm, Hollenbach, Dietrich & Co.  In buying the business they also acquired the Penn Street building.  It became the permanent home of the firm.  The two had advanced merchandising ideas for the times.  Barrels of whiskey, rum and brandy lined the walls and a customer could sample the goods before purchasing.  In those days one dollar would be enough buy a full gallon of decent whiskey.

Hollenbach and his partner also showed considerable talent in marketing their whiskey brands.    As shown on a trade card here, they adopted as a trademark a keystone -- Pennsylvania being the Keystone State--emblazoned with a red star.  Advertising a long distance phone meant that the firm solicited mail orders.  They featured only two brands but marketed them vigorously.  One whiskey was named “Hodico,” an anagram of Hollenbach’s and Dietrich’s names. The firm’s other brand was “Social Rye”.   Its label featured a colorful scene of three gents sitting around a table drinking. As shown here, that whiskey could be purchased in both quarts and flasks. 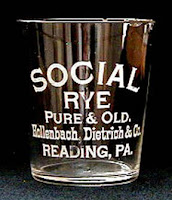 Hollenbach, Dietrich were not distillers but blenders of whiskey to meet  standards of taste for their two brands.   Their raw product almost certainly came from the many distilleries that dotted the Pennsylvania landscape at that time.  Like many liquor dealers Hollenbach, Dietrich distributed multiple giveaway items to favored customers.  Shot glasses and jigger glasses were issue for Social Rye.  The slogan on the glasses -- “Pure and Old”-- was a nod to the national campaign for pure food

and beverage that had its culmination in the Pure Food and Drug Act in 1906.  A more expensive gift item was the fancy paperweight shown here,  no doubt the product of a nearby Pennsylvania glass house.  For Hodico whiskey the partners issued a tip tray featuring a “Gibson Girl-like” figure with considerable bare bosom visible.  The slogan for this whiskey was “Every Drop a Pleasure.”

The partners also sold other brands of spirits beside their own.  Among them were several that claimed to have medicinal values.   “Malakof Bitters,” was such a nostrum,  a product of a Belgian firm with offices in New York.  Often marketed as a remedy, it eventually was exposed as merely a “liquor compound” by U.S. Food and Drug officials.  Hollenbach, Dietrich also marketed “Duffy’s Pure Malt Whiskey,” another alcoholic product that masqueraded as medicine. 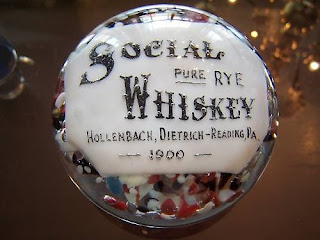 The company proved to be a highly prosperous enterprise.   A contemporary account  noted the following:   “The firm...does a large business, handling nothing but the finest wines and whiskies, and they are the proprietors of the well known ‘Social Rye,’ handled by the trade all over the country.”   Ben’s prosperity also brought his family a large and comfortable home at 125 South Eighth Street in Reading.

Hollenbach was also recognized throughout the community for his business acumen and his participation in numerous fraternal and social organizations.   His memberships included Reading Lodge No. 115 of the Elks Club,the Sons of Veterans, the Fraternal Order of Eagles, the Knights of Pythias and the Knights of Malta.   He also was a member of The Supreme Council of the Royal Arcanum, commonly known simply as the Royal Arcanum,  a quasi-Masonic fraternal benefit society founded in 1877 in Boston. 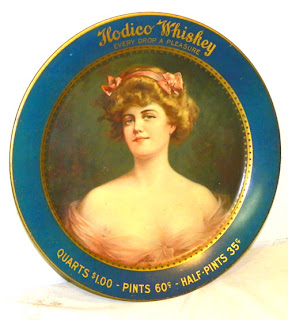 Ben Hollenbach died in 1915 at the young age of 44.   His funeral was held at the Lutheran Church in Reading,  to which his family were adherents.   He was buried in a local cemetery with his widow, Carrie, and daughter,  Florence,  mourning beside his gravesite.  Upon Hollenbach’s death,  Howard Detrich became president of the company, bringing his eldest son, Claude, into the business as secretary of the corporation.   As National Prohibition loomed,  Detrich in 1918 converted the business into a drug store and operated it until he died in 1940.

Prohibition and the forced closing of a liquor dealership that dated back to 1869, however, could not erase the mark that Ben Hollenbach had made during his lifetime.  This small town boy had gone from hauling a horse-drawn liquor wagon to the pinnacle of business and social circles in Reading.  He had proved to be a driver with real drive.