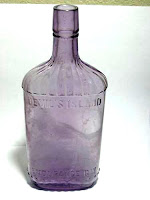 In March 1905 a white teenager named Margaret Lear was on her way home from school in Shreveport, Louisiana.  As she passed through an African-American neighborhood,  she was brutally attacked and murdered.  Her accused assailant,  a black man named Coleman, allegedly was drunk on “cheap gin” he had bought at a local saloon.

The murder and its aftermath garnered national headlines. Three years later a prominent muckraking American journalist, Will Irwin, writing in Collier’s Weekly of May 16, 1908, used the incident to 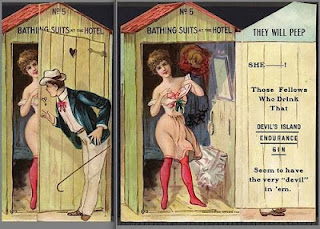 indict the saloon trade and in particular inexpensive gin that was being produced by Northern distilleries and, as Irwin saw it, “sold in the low dives of all the black belt from the Carolinas to Louisiana and Mississippi.” .

Irwin also blamed the names and advertising for brands of gin as  suggesting that they possessed the properties of aphrodisiacs. “The gin was 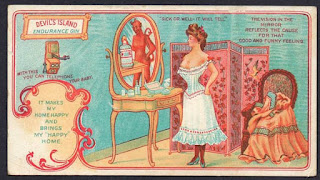 cheap, its labels bore lascivious suggestions and were decorated with highly indecent portraiture of white women.”  Implicit was his conclusion that this liquor was responsible for sexual aggression in Coleman and other blacks.  The journalist  singled out for special attention Devil’s Island Endurance Gin. In quart bottles, like the one shown here, it sold for $1.

Two of the brand’s early 1900s trade cards seem to bear out Irwin’s contentions.  The first shows a man peeking into a woman’s beach dressing room where it is not clear how much clothing she has on.  Opened,  she is seen wearing a bathing suit and seems little disturbed about being watched and says:  “Those fellows who drink that Devil’s Island Endurance Gin seem to have the very “devil’ in them.”  Note that from the shadows,  Satan is watching.  The second trade card shows a woman in the process of undressing, with scads of bosom showing.  She sees the devil in the mirror with a large bottle of gin.   The liquor is credited with giving “that good and funny feeling”  and other positive effects.  This gin clearly was being merchandised as a stimulant for something. 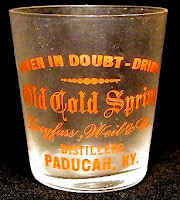 Prohibition,  the company was both a distiller and distributor of a wide number of liquor brands, chiefly whiskey.  It was located initially at 120 North Second Street and later the address changed to 115-117 North Second in Paducah.

The owners were Sam H. Dreyfuss and his partner,Weil.  Among their liquor brands were “Eclipse Whiskey,” “Old Cold Spring Rye,” “A.M. 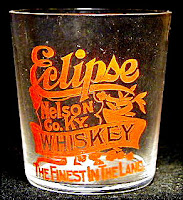 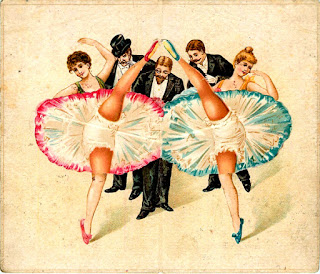 Irwin’s linking of Devil’s Island Endurance Gin and the Lear murder caught the attention of one of America most prominent industrialists and millionaires, Henry Ford.  A notorious anti-Semite, Ford did a ghost-written weekly column for a newspaper he owned, called the Dearborn Independent.   On the assumption that Dreyfuss and Weil were Jewish,  he used the article to rail against liquor trade for selling the “products of Jewish poisoned liquor factories.”  The Jewish people, he more than implied, were responsible for

lawless actions of the Negro race.  One derogatory racial stereotype thereby became the occasion for another.

As for Coleman,  guilty or not, he was nearly killed by a white lynch mob and the Louisiana militia had to be called out to protect him.  Within nine days after the crime, according to newspaper  reports, he was tried in a Shreveport court, found guilty, and  “legally” executed.  The New York Times reported that the Governor of Louisiana was expected to be in attendance at the hanging.  Another stanza of Syke’s lyrics for Devil’s Island Gin Blues goes like this:

Posted by Jack Sullivan at 6:25 AM