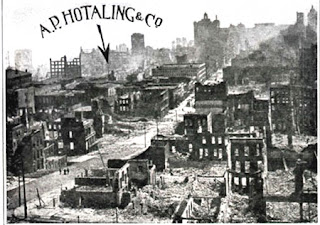 The earthquake and subsequently burning of San Francisco in 1906 was greeted by a good many clergymen as divine retribution for the city’s wicked, wicked ways. The fact that houses of worship were incinerated right along with everything else — while a huge whiskey warehouse was spared — inspired this immediate verse by poet and wit Charles Kellogg Field:


'If, as they say, God spanked the town
For being over frisky,
Why did He burn the churches down
And save Hotaling's whiskey?'"

The ironies might have been even stronger had Field, the clergymen and his fellow San Franciscans been more aware of Anson P. Hotaling’s religious views.  His middle initial stood for “Parsons” but 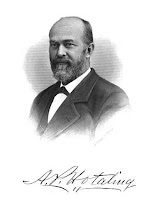 he was far from being a traditional in his theological views.  That story comes later.  First the context:

Hotaling, shown here in maturity,  was born in 1828 in New Baltimore, a town in Green County, New York.  He was of Knickerbocker Dutch stock on his father’s side.  His mother was a  “Parsons,”  and an immigrant from England.  Anson attended local schools but left during his teen years to work on his father’s farm but soon found other pursuits more attractive.  After clerking briefly in a country store, at about age 20, he discovered photography, a pursuit that was still in its infancy.  Buying good equipment, he traveled throughout New York State taking portraits with as a biographer says “much pecuniary and professional success.” 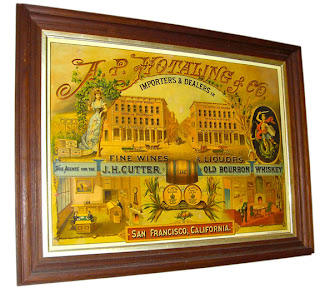 Soon that occupation began to pale and in 1952, age 24, Hotaling sailed from New York to California in the ship “Racehound,” along with other men joining the Gold Rush.  Enroute the ship was forced to dock for an extended period at Valparaiso, Chile, for repairs and refitting.   Hotaling enjoyed the Latin lifestyle and determined to stay.  Just before the ship sailed again, he changed his mind and went along to join the thousands hoping to “get rich quick” in the California placer mines.  Moiling for gold did not suit him long and he went back to clerking,  this time in a San Francisco liquor store owned by W.J. Griffin, located at the corner of Sansome and Jackson Streets. There Hotaling found his true calling.

Working for Griffin for several years and amassing a substantial amount of capital, in 1865 he bought out his employer and opened his own wholesale liquor business under the name “A.P. Hotaling & Co.”   About the same period Anson also  found time to marry.  His  bride was Lavinia Linen, the daughter of James Linen, a well known San Francisco writer and poet.  She was sixteen years Hotaling’s junior.  They would have four sons.

Hotaling remained at the Sansome and Jackson address for eight years and then, needing larger quarters,  he moved to 429-439 Jackson, where the firm remained for the rest of its business life.  A company sign shows his complex of buildings straddling a major street.  The one on the left was his sales office; on the right his warehouse.   By 1880 he was the largest liquor wholesaler in San Francisco  with a sales volume of 1,750 barrels annually. 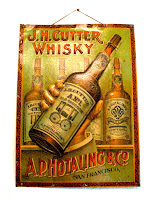 With his San Francisco success,  Hotaling opened offices in other major West Coast cities. Directories indicate that he maintained a retail outlet in Seattle, Washington, on Commercial Street from 1889 to 1893, and in Portland, Oregon, from 1875 to 1887, at addresses on Front and subsequently North First Streets.   An embossed bottle from Portland that held “J. H. Cutter Whiskey” is shown here.  Cutter was Hotaling’s flagship brand for many years, vigorously advertised through newspaper ads and bar signs.  The sign shown here is an unusual three dimensional display.

In 1903 the A.P. Hotaling Company sold the rights to the Cutter name to Sherwood and Sherwood.   After that the company’s principal brand became “Old Kirk.”  It was a proprietary brand, trademarked with the government in 1906.  Over the years Hotaling’s firm also featured other labels, including “Hotalings Special Reserve,” “O.P.S. Bourbon,”  “St. George,”  “OK A No. 1 Old Bourbon,” and the interestingly named, “Death to Imitators.”

Old Kirk was vigorously marketed.  The company provided bar signs that could be as topical as the Great White Fleet.  That was the popular nickname for the United States Navy battle group that completed a circumnavigation of the globe from December 1907 to February 1909 by order of U.S. President Theodore Roosevelt.  Another sign advertising “Old Kirk” was in medieval-looking stained glass.   A. P. Hotaling & Co. also provided a number of giveaways to favored customers, including back of the bar bottles and, to retail customers,  medallions that might be used as watch fobs or good luck charms. 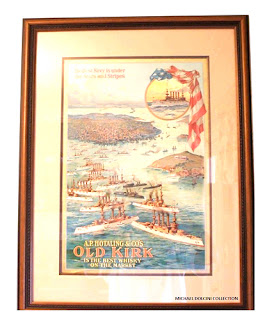 Hotaling himself became a well known figure in San Francisco, an active member of both the Old Fellows and Masonic organizations.  His write-up covered more than two full pages of an 1881 book entitled “Contemporary Biographies of California’s Representative Men.”  That author, without mentioning specific names, affirmed that Hotaling was active in several  benevolent organizations and also supported leading literary and art associations of San Francisco.

The biographer also devoted considerable time to Anson’s religious beliefs, stating:  “Contact with the world, and especially the world of California, in Mr. Hotalings case, as in that of many others, has lead to extreme latitudinarianism....”  That term, meaning no taste for organized religion, was not going to endear this whiskey man to local clergy.  The writer had more to say about Hotaling’s theology:  “He believes that religion is a life,not a creed; that only a soul at liberty can be a liberal soul;  that stiff zeal and uncompassionate rigor do not constitute genuine piety;  that the religion most needed is that which takes hold on the daily life about us, and promotes just dealing between man and man.”  All the more for folks later to wonder why the churches burned and Hotaling’s whiskey was spared.

Moreover, every other major stock of whiskey in San Francisco had been destroyed.  Hotalings' salvation may have been by the grace of God, but there also were more earthbound causes.   According to accounts, the warehouse was threatened and saved three times:  First by a fireman who hacked off smoldering roof cornices.  Second by a single length of hose from a Navy fireboat in San Francisco Bay that firefighters dragged over the ridge of Telegraph Hill for over a mile and eleven blocks 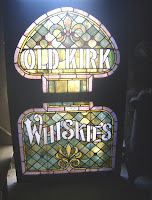 to the Jackson street site. The final salvation was a bucket brigade, many of the participants Hotaling's workers, who slopped a compote of sewage and sea water on the structure from an adjacent site.   The mixture steamed and stunk as it hit the hot exterior but as one writer reported, “the muck did the trick.”  Moreover, while other liquor dealers in the city suffered from looting,  authorities allowed the Hotalings to hire a hundred men to stand guard. The firm lost nothing.

Unfortunately Anson Hotaling was not around to witness this excitement.  He died in 1899, much mourned by his widow, Lavinia, and four sons.   Hotaling had been bringing his boys into the firm as they matured.  Son Richard Hotaling, assisted by his brother Fred, was able to take over the business and appears to have run it with the same skill as his father.  The business continued to prosper at its Jackson Street address until shut down by National Prohibition in 1919.  Subsequently a bronze tablet with Field’s verse on it was attached to the Hotaling warehouse where it can still be found.  In addition, nearby Jones Alley was later renamed Hotaling Way.   Anson, the “latitudinarian” on whom Heaven smiled, may be gone but not forgotten in San Francisco. 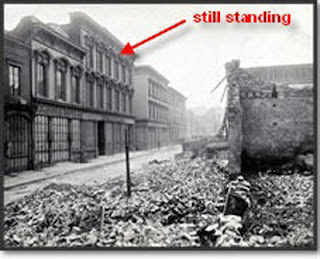 Note:  The images of Hotaling signs are from the website and collection of Michael Dolcini, whose untimely death at an early age has been reported.  Much of the material on Anson Hotaling, including his religious views, are from “Contemporary Biographies of California’s Representative Men,” published in 1881, principal author Hubert H. Bancroft.