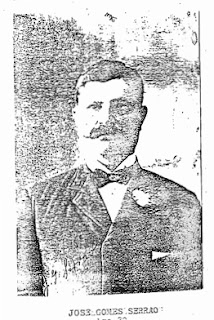 As Jose Gomes Serrao grew up in St. Antonio, Fuchal, Maderia, Portugal, he clearly had no inkling that he would find fame and fortune on an “island Paradise” half a world away, in  a place 2,000 from the closest continent.  Nor knew that he would establish the only bonded distillery in the history of the Hawaiian Islands.

Born to Antonio Serrao and Maria Carlotta Neves in March, 1864, Jose, shown here at about age 30, clearly a very serious man, was educated in the schools of his native Portugal.   At the age of twenty,  possibly beckoned by relatives who were already in Hawaii working on the burgeoning sugar cane plantations,  he embarked aboard the ship Hankow,  arriving on the “Big Island” of Hawaii in July, 1883.  Initially he worked on a farm near 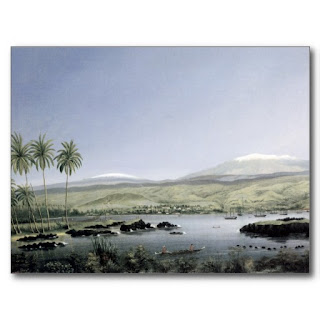 Hanakua. Three years later Serrao moved to the capital, Hilo, to join two of his brothers and together they operated a grocery store on Waianuenue Avenue. The town is shown here as it looked before the turn of the century.  Note the two large volcanoes,  Mauna Loa and Mauna Kea, that dominate the island.

Shortly after arriving in Hilo he met a young Portuguese immigrant girl who herself was a recent resident of Hawaii.   She was Emilia de Souza from San Migueal, who had come to the islands with her family.  She was 14 years younger than Jose.  Despite the age difference they soon married and begin a family.   The couple would eventually have five sons, Jose Jr., Louis, Antone, Alfred and Frank, and two daughters,  Emilia and Maria.

Meanwhile Serrao was demonstrating his business acumen.  He was hired to manage a local sugar mill and later bought a half interest in it.   After the mill was sold to other interests in 1889,  he struck out on his own and built a distillery on Hilo’s Kukuau Street.  The principal product was rum, made from the sugar cane grown on the island.  This was considered at the time a daring enterprise since the commerce of the islands largely was controlled by  descendants of missionaries, most of whom were opposed to alcoholic drinks. 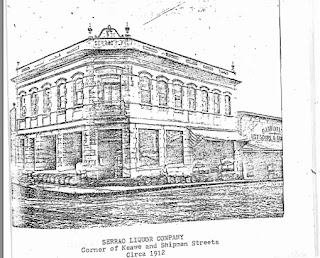 Since up to that time all liquor had to be imported into Hawaii and was expensive,  Serrao’s rum sales were brisk. From the profits,  he imported two stone masons from Portugal to construct the only stone building of its kind in Hilo.  Shown right, it housed the retail and wholesale liquor business Jose called the Serrao Liquor Company,  located at the corner of Keawe and Shipman Street.   He also owned a drinking establishment on Shipman Street  he called the Union Saloon.  It was operated by his brother-in-law until the latter’s death.

In 1902 Serrao acquired 80 acres of homestead land in Kaumana,  not far from Hilo, on the slopes of Mauna Kea.  There he built a large house for his growing family and used other land to grow Isabella grapes to make Portuguese type wines.  By 1907 his vineyards were mature enough that he built and opened a second

facility, known as Distillery No. 2, shown left.   There he made wine and also distilled other spirits with an emphasis on gin.   His billhead from that time proclaims his firm to be “Distillers, Wine Makers,  Wholesale Liquor Dealers.”

Shown here are two Serrao gin bottles.  Both are clear and embossed with the company name.   Like many early Hawaiian glass containers,  these bottles are highly sought by local  collectors.   For example, the larger case gin shown here recently sold for more than $1,200.   The second bottle adds “Ltd.” to the company name.

When Prohibition took effect in 1920, Serrao had 14,000 gallons of alcoholic beverages in bonded warehouses in New York City and in confinement areas under his house.   They were sealed by the Federal Revenue Service.  He never got his liquor back.  During the “dry” period Federal authorities are reported to have destroyed it all. He then turned his vineyards and and winery to producing a fermented grape juice with less than one-half of one percent alcohol and changed the name of the company to the “Serrao Grape Juice Factory.”  An ad from the early 1920s touted this product,  claiming the grapes had been “grown in cracks on volcanic rocks on a famous bird’s eye view elevation of Hilo, Hawaii.”

The loss of his liquor markets proved disastrous for Serrao, a calamity that  grape juice could not remedy.   Serrao’s company struggled through the 1920s and by the early 1930s his land and 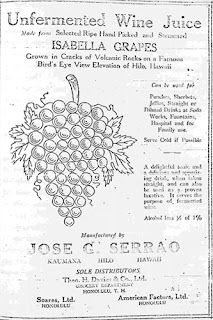 businesses were heavily mortgaged.   The 1930 census found him living with Emilia in their Kaumana residence.  Three sons,18 and over, and a teenaged daughter were still at home. As the Depression deepened the Bank of Hawaii foreclosed on his property and in 1932 Serrao was forced to sell out.  At that point Jose, who was then 68 years old, went into retirement.

When Repeal was enacted only two years later,  Serrao’s sons, who had been working with him in the business, reopened the winery and liquor sales , calling it “Serrao Wine and Liquor Co.”  Initially under the management of Jose Jr.,  he later sold out to his brother, Alfred.  During World War II with shipping restricted to war-related materials,  brandy necessary for Serrao’s distinctive Portuguese wine was unobtainable.  The company shut its doors for the last time.

Jose himself lived until August 1943, dying at the age of 79.   Some fifty years a resident of Hilo,  he was remembered for his business acumen and assistance to other island businessmen, many of whom were said to owe their start to his generosity.   An editorial in the local Hilo newspaper apparently summed up the feelings of many on the Big Island.  It wrote:  “God rest you, Joe Serrao,  you were a good man.”

Note:  This vignette would not have been possible without a history paper done at Hilo College in 1977 by a grandnephew of Jose Serrao, a student named Walter Serrao.   Only one copy is known to exist and is held by the University of Hawaii Library on Oahu.   Intrigued by the fact that a bonded distillery had once existed in the Hawaiian Islands,  I tracked down the document.  Librarian Mary Haraguchi was kind enough to scan it and send to me it electronically.  That paper provided most of the information found here and also was the source of the several grainy pictures.   Thanks to Walter Serrao and Ms. Haraguchi, this story of the enterprising immigrant who founded a distillery “in Paradise” was made possible.

Posted by Jack Sullivan at 2:55 PM