Two objectives are primary in the Kentucky tradition: To breed fast thoroughbred horses and to create good bourbon whiskey. James J. Douglas made his life work both pursuits and thereby was appointed a “Kentucky Colonel” and attained legendary status among his peers. How Douglas earned his title is the core of this vignette.

A Kentuckian through and through, James J. Douglas was born in 1846 to parents who themselves were native Kentuckians.  During his lifetime he would be known by several names:  Jim Douglas,  J.J. Douglas,  Colonel Douglas and

occasionally as Douglass.  He was just 14 when the Civil War broke out and even though Kentuckians fought for both sides, there is no evidence of his participation and certainly not as an officer.  The rank of “Kentucky Colonel” was first formalized in 1813 to honor military heroes, but in the late 19th Century, administered by the governor, it became an honorary and ceremonial title for persons who had achieved distinction in other fields, particularly business.

The public record says little of Douglas’ early years.  It is documented that he settled in Louisville and he likely was engaged in the whiskey trade, a leading industry of that city.  In 1879 he married Ella K. Douglas,  a Kentucky-born woman.   There was a 12 year difference in their ages.  He was 33, she but 21.  There would be no children.

In 1886 after many years in apprenticeship to other whiskey men, Douglas struck out on his own.  He created a wholesale liquor business in Louisville and called his firm, J.J. Douglas  Co.  At first he was located at 135 Third Street but with success he soon needed more space and moved down the street to 148-150 Third Street.  When that space eventually proved to be too small, the company moved to 122 Second Street, its home for the next 13 years.   Although Douglas claimed to be a distiller, he more

likely was a “rectifier,” that is, someone blending the whiskey from a variety of sources in Kentucky to achieve a smoothness and taste appealing to consumers.

The firm’s flagship brand was “Jim Douglas Whiskey.” As shown on the bottle here, the whiskey was openly advertised as a “blend.”  Jim Douglas was one of the few labels that he troubled to trademark with the federal government.   A key item of the trademark application was the circular band on the label with the name in the center and “rays radiating from said band.”   The company also used a number of other brand names for its

Like other Louisville whiskey men,  Douglas was competing vigorously for the business of saloons, bars and restaurants to feature his liquor, as well as attempting to broaden his retail base.  An essential part of his merchandising strategy was to provide ample giveaway items.  Douglas 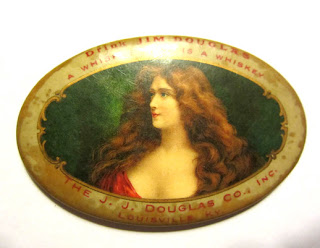 seemed to have special flair for these gifts.  His advertising shot glass is a finely etched example,  with the script the same as his letterhead. He gave favored customers milk glass paperweights or celluloid pocket mirrors featuring a long tressed beauty displaying considerable bosom.  The slogan on the latter was: “A Whiskey That Is a Whiskey.”  More unusual were an ornate metal watch fob with a compass in the center and a cardboard baseball on which to calculate innings, outs and scores.   The scorecard was particularly 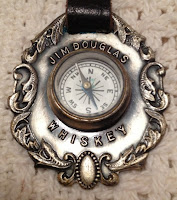 appropriate for Louisville, the home of the Louisville Slugger bat company and a noted baseball town. 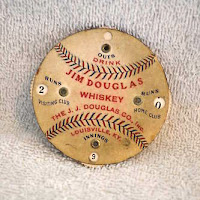 As his liquor dealership grew and prospered Douglas became very wealthy.  When asked his occupation by the census taker in 1900,  he replied, probably with tongue-in-cheek, “capitalist.”   Moreover, his interests were growing away from the liquor business and toward horse racing.  Called “an ardent racing fan,” in 1895 he developed and owned a trotting track known as the Douglas Park Racetrack.   Later the track expanded to thoroughbred racing and competed directly with Churchill Downs, eventually becoming the home of the renowned Kentucky Handicap race.  About this same time,  Douglas appears to  have turned over management and perhaps elements of ownership of J.J. Douglas & Co. to a Louisville resident named Jacob Bloch, born in Texas of French immigrant parents.

In 1896 Douglas moved from Louisville to the nearby village of Middletown.  There he bought a 300-acre estate from the widow of a Louisville tobacco merchant who had established it as a horse farm.  As one account put it,  Douglas lived there “in elegant style.”  He also made improvements on the property, including building a stone waiting station along the inter-urban line to Louisville.

His estate, which came to be called “Douglas Place,” proved to be an excellent location to raise thoroughbreds.  His horse barns are shown here.  Douglas imported fine Irish stallions provide stud services.  Among them was a renowned racer named “Eothan.”  When Eothan died after siring such champions as “Requital”  and “Other Crack,”  his demise made headlines in the New York Times.  Douglas named his stables as the Eothan Stock Farm.  The annals of Kentucky horses are replete with his sale of thoroughbreds.  An example:  “Epilaska,” a chestnut filly foaled on April 4, 1904, “bred and consigned by J. J. Douglas.”  It was during this period that Douglas was designated a true “Kentucky Colonel” by the governor of the state.

Meanwhile, under the direction of Bloch, J.J. Douglas & Co., was continuing to thrive.  About 1905, the company moved to 224 Main Street,  on the periphery of Louisville’s famed “Whiskey Row.”  That was followed four years later to a location in the heart of that 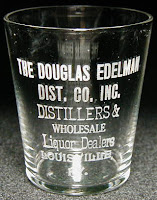 famed strip of whiskey distillers and dealers, shown here.   In 1915 the company underwent a corporate change.   It was incorporated, capitalized for $100,000,  and the name changed to Douglas, Edelman Distilling Company.  The incorporator was Jesse Bloch,  Jacob Bloch’s son.

Douglas lived to see the business change but died two years later in 1917 at the age of 71.  Shortly after, control of his racetrack was taken by rival Churchill Downs which operated the facility until 1958.  Douglas’ liquor dealership was terminated by National Prohibition in 1919.    After his death, his horse farm went through several owners,  his home eventually was demolished and the farm developed into a residential subdivision known to this day as “Douglass Hills.”   How the extra “s” evolved into his name is unclear.  Of  the several names by which he was known in his lifetime, I believe this Kentuckian who so successfully mixed whiskey and horses should be remembered as Kentucky Colonel Jim Douglas.

Posted by Jack Sullivan at 6:14 AM