There are two notable George Jacksons in Colorado history.  One is famous for starting the state’s gold rush when he discovered rich placer deposits on the south fork of Clear Creek.  The other George Jackson, the subject of this post, earned his reputation striking gold as a successful liquor dealer and merchant in Pueblo, Colorado.

George A. Jackson’s discovery of gold occurred early in 1859.  It was followed by other strikes nearby, including a second miner finding the “mother lode” of the Colorado Rockies.  Those events 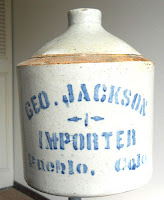 resulted inthousands of prospectors from around the world descending on Clear Creek Canyon.  Many of them could not get their wagons and supplies into the site and set up camp at the mouth of the canyon.  When a group of Eastern miners arrived at the camp later that year, they decided to settle there, laid out a town, and named it Golden City, a name later changed to just plain Golden.

Meanwhile our George Jackson was growing up in New Brunswick.  Born in 1851, he was the son of Scottish immigrants to Canada, although census records indicate his father actually had been born in Portugal.  In

1877 at the age of 26 Jackson emigrated to the United States.  His first years in America may have been spent in Nebraska, if census data are correct.  In 1882 he decided his fortunes lay further West and he headed to Colorado, settling in Pueblo. 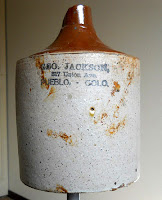 At the time Jackson arrived, Pueblo was booming.  The  city was a rail hub with an immense train yard located below the bluff along the Arkansas River.  By 1886 it had become known for its steel mills and was a regional smelting center.   Shown here in 1890, the city at that point boasted a population of 30,000 and was home to thousands of steel and railroad workers as well as employees in adjunct industries.

Our canny Canadian early saw an opportunity to enter into a range of businesses,  including at various times sales of carriages, farm implements, agricultural products, and hardware.   Jackson’s main pursuit and the major source of his gold, however,  were alcoholic beverages. The workers and their bosses in Pueblo and surrounding regions were a thirsty lot.  Thus was created “Geo. Jackson, Importer, Co.”  Jackson located his store at 317 Union Avenue, the street shown here as looked in 1910.  This was the main commercial hub of the city and his store there apparently hummed with activity.

The jugs in which he contained his whiskey were numerous, with several varieties shown above.   They include Bristol glaze containers, some with large cobalt lettering and others with the label barely intelligible.   He also employed two-tone “shoulder” jugs, both with inked and underglazed printed labels.   These jugs, most of them gallon sized, held whiskey.  His whiskey was sold at retail from Jackson’s Union Avenue store, as well as wholesaled to bars and saloons.   Jackson bought the raw

product from distilleries in Kentucky and elsewhere, easily shipped to him by rail  He perhaps did a bit of “rectifying” and sold the blends under his own labels.

Like other liquor dealers of his time, Jackson also merchandised beer.  About a hundred miles  up the road in Golden, in 1873 German immigrants Adolph Coors with a partner had established a major brewery. In 1880 Coors bought out his partner and became the sole owner. In those days many brewers sold their product in large barrels and allowed it to be bottled at the site of retail sales.  Jackson won the exclusive contract to be the Coors agent in Pueblo and surrounding counties.  In the 1900 census,  he gave his occupation as “brewer,”  although his brew arrived by railroad from Golden.

As a bottler he was able to order up embossed glass containers to meet his merchandising needs.  Most of the are trademarked “Geo. Jackson Agt”  with a pictorial monogram.  Shown here are three of Jackson’’s “Coors Golden Beer” bottles.   The first is a smaller “pony” blown in a mold with an applied lip.  The second is a quart in a champagne shape with a blob top.  The third is a quart that features a metallic label and a closure known as a Baltimore loop.    Jackson almost certainly personally chose the design of these bottles.

But it was not all work for the Scots immigrant.  At the somewhat advanced age of 44 and already a successful businessman in 1885 he married a considerably younger woman.  She was Annie, 26, born in Illinois with her mother an Ohioan and her father an Irish immigrant.  The 1900 census found the couple living in a house on 1032 Lake Avenue in Pueblo.   Living with them at the time was George’s aged mother, Lavina, and his 36-year-old brother, Harry.  The census materials gave no indication of children. 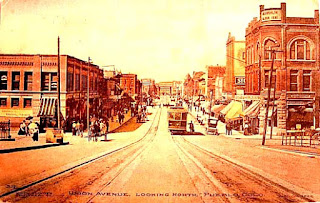 Through this period and into 1900s,  Jackson’s several enterprises were thriving. Pueblo was called “the Jewel of Colorado.”  Union Street continued to be a lively retail avenue, plied by trolleys and an occasional motor car.  A 1910 post card shows the prosperous street as Jackson must have seen it. As nearby states voted to ban alcohol,  he watched mail order sales dwindle but Colorado and Pueblo stayed “wet.”   On February 21, 1914, age 63, Jackson died of unspecified causes.  It is not clear if his business continued  during the six years before National Prohibition would have shut it down permanently. 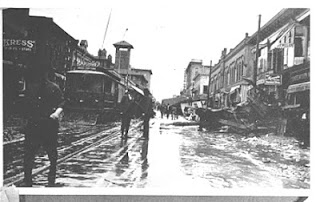 In the summer of 1921 Pueblo itself was to receive a devastating blow.  Although the populace felt themselves safe from flooding by the Arkansas River, a massive storm unleashed its fury on the area and the reservoirs along the river gave way. Exact numbers were not kept, but it is speculated that hundreds were killed. Union Avenue, shown here after the  deluge,  was inundated under 10 feet of water.  Rail cars and bloated horses floated past once prosperous storefronts. The entire commercial district of Pueblo was wiped out.  Out of necessity, the city moved its business district north to Main Street. Low lying Union Avenue, shown here after the flood, was left largely in its ruined and abandoned state until restored in the 1980s.

George Jackson would surely have mourned loss of his familiar haunts.  But he could rest easy knowing that he had made his mark as a leading whiskey man in the State of Colorado, thereby mining his own kind of gold.