As a leading Kentucky whiskey man from a leading distilling family,  Nathan Uri cannot have found it easy living in the shadow of his famous brother-in-law.  That is one possible reason he ultimately departed from partnership with Isaac Wolfe (I.W.) Bernheim, the entrepreneur who gave the world “I.W. Harper Bourbon.” 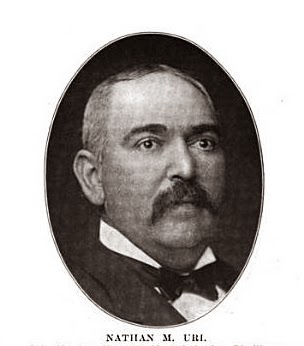 Nathan’s father, Morris “Moses” Uri, an immigrant from Hechingen, Germany, was an early settler in Paducah, Kentucky. He owned a small frontier type general store there that burned in a citywide conflagration in 1851. Surviving the loss, Morris continued in commerce, running a grocery with a large liquor component.  He ultimately became part owner of a distillery and opened a liquor sales office in Chicago.  With wife Amelia (Halheimer),  also a German immigrant, Morris sired a family of six,  five girls and Nathan, born in 1857.

When Nathan was a boy of eleven, the Bernheim brothers,  I.W. and Bernard, arrived in town with only a few dollars between them.  The Uri family warmly greeted them as did others in the Reformed Jewish congregation in Paducah.  Among welcomers was Nathan’s sister Amanda, four years his junior, who later would marry I.W. Bernheim.  It appears that her father actively assisted the Bernheims in their efforts to enter the liquor business in Paducah.   Meanwhile, as he grew toward maturity, Nathan was increasingly active in his father’s liquor business.

In 1875, the two families merged their activities and the wholesale liquor company known as Bernheim Bros. & Uri was born.  Because of their proximity to large waterways and the ability to ship product throughout the Midwest, the company prospered.  Meanwhile Nathan found time for a personal life.  About 1879 he wooed and wed Adda (aka Addie),  a woman four years his junior.  She was born in Paducah, the daughter of immigrants from Prussia.  The 1880 census found Nathan, newly married in Paducah, with a ten month old daughter, Ella. The couple subsequently would add two sons, Morris and Walter.

As the surge of business dictated,  Bernheim Bros. and Uri eventually outgrew Paducah.  Chicago directories indicate that the company opened an office there in 1883, located at 87 Washington Street.  That probably was the same location where Morris Uri earlier had opened an office.  Later the company moved its Chicago quarters to 95 East Washington.  At the urging of I.W. Bernheim and with the blessing and likely financial support of the Uri family, in 1888 the company moved lock, stock and whiskey barrels to Louisville, recognized center of the Kentucky whiskey industry.  They located at 135-137 Main Street. 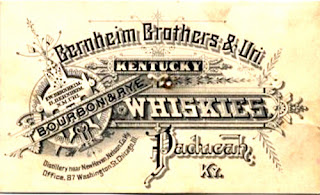 About 1890, Bernheim Bros. and Uri acquired an interest in the Pleasure Ridge Park distillery, seven miles southwest of Louisville.  That facility had been built in the early 1870s but the owner had lost it in the Panic of 1870 and they joined a combine of investors to buy him out.  At this time Bernheim and Uri were not distillers themselves but  rectifiers and wholesalers of a wide variety of alcoholic spirits.  Pleasure Ridge provided them with the raw whiskey for blending into brands they vigorously marketed nationwide. The arrangement was that Isaac worked sales to the West, Nathan to the East. Endowed with a strong work ethic, the two men were on the road constantly.  Meanwhile Bernard looked after day to day operations.

Then, seemingly without warning,  the brother-in-law departed.  On June 1, 1891, Nathan Uri broke away from the Bernheims and set up his own company, calling it N. M. Uri & Company, located at 100 Main Street at Louisville’s “Whiskey Row.”  He also began operating  and eventually purchased, the International Distillery at Hunters Station.  It was located near a depot on the L & N Railroad, four miles north of Bardstown, Kentucky.   Originally built in the 1840s, the distillery had been destroyed by fire in 1880 and rebuilt in 1885.  Insurance records compiled after Uri’s ownership suggest that it was of frame construction with a shingle roof with two adjacent warehouses.  Uri’s distillery continued to operate until Prohibition.

The International Distillery provided Uri with whiskey for his manifold brands, 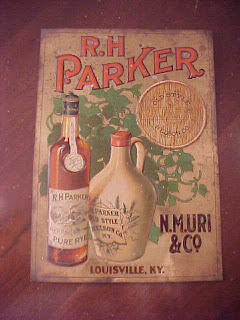 Uri also featured a large array of giveaway items for favored customers.  Among the most unusual were metal containers, in the shape of tea kettles,  jugs, pitchers and urns, most of them silver plated and clearly pricey items. Uri’s giveaways most often advertised Parker Rye,  including saloon signs, 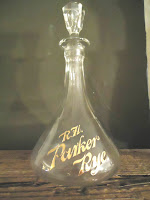 back of the bar bottles, and shot glasses. Some items, like a tip tray for his Mumm’s whiskey, were issued for other brands.   In 1902, apparently needing larger quarters, Uri moved the firm to 219-221 West Main Street.

In 1909 Nathan Uri died.  With his grieving family grouped around his grave site, he was interred in Louisville’s Temple Cemetery, a Jewish burying ground that his father Morris had helped found years earlier.  Uri’s marker, shown here, is located in Section A-3, Plot 37.  Beside him lies his wife Addie who died in 1928.

After Nathan’s death Walter Uri, his second son,  took the management reins at N.M Uri & Company.  The firm moved once more, this time to 215 West Main where it flourished for the next six years,  relocating in 1909 for a last time to 801-803 West Main.   Prohibition closed the company doors forever in 1919. 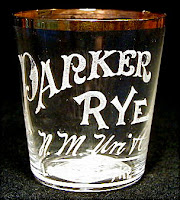 The question remains,  why did Nathan make the break from the Bernheim brothers?  Was it dissatisfaction with being on the road selling while his children were growing up?  Was Addie nagging him to stay home more?   Or was Nathan chafing at being his own boss and under the large shadow of I.W. Bernheim?  Perhaps there were serious business differences between the two.  In 1912 Bernheim wrote a book called “History of the Settlement of Jews in Paducah and 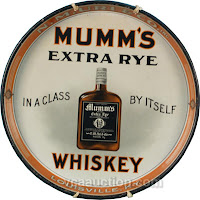 the Lower Ohio Valley.” In it he wrote favorably about Morris Uri and included mentions of two of Nathan’s sisters, one of them his wife Amanda.   By contrast nary a word appears in the book about his brother-in-law and former partner, Nathan.

Other clues to a rivalry may reside in the rich trove of whiskey collectibles that Uri left behind.  The Bernheims also were noted for issuing a flurry of silver plated teapots, fancy jugs, shot glasses and tip trays.   To my mind -- and ear -- the brand name “R. H. Parker” sounds suspiciously like “I.W.Harper.”  Could it be that the brothers-in-law were fervently competing?

Posted by Jack Sullivan at 2:42 PM