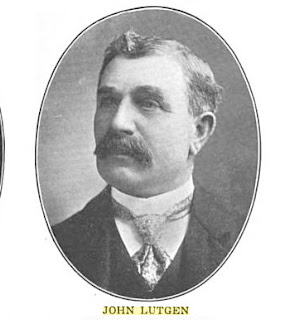 John Lutgen and his whiskey company had gone from success to success in  San Francisco,  moving each time to larger quarters and in 1906 occupied a spacious building at 29-31 Battery Street. A local writer had opined : "Their trade has been prosperous from the start, and has since extended not only throughout the State, but also throughout the coast, their establishment being one of the representative liquor houses of the Golden Gate City."  At 5:12 a.m. on the morning of Wednesday, April 18, 1906,  one of the greatest natural disasters in American history struck San Francisco and all that changed radically.

Before describing its effects on Lutgen, it is important understand where he came from and who he was.  John was born in 1847 near Bremen Germany, the eldest son of Henry and Oddeli

Bottger Lutgen. When he was 11 years old his father died and as the oldest, he was left to carry on the family.  As soon as he reached 19 he left Germany, braved an often treacherous ocean crossing and went to work in New York City. After two years in the Big Apple,  probably  clerking in a store, he set out for California, arriving via the Panama Canal.  He quickly got a job with San Francisco grocery where he labored 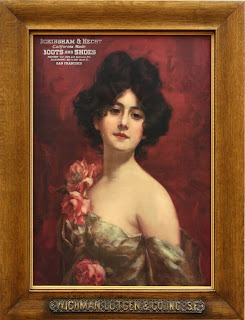 By 1871 Lutgen had saved enough money to think about settling down and taking a wife.   He was married that year in San Francisco to Miss Sofia Borman, like himself a native of Germany.  They would have four children,  two girls and two boys.  Tragically both sons, named Henry and John, died during childhood.

In 1877,  Lutgen teamed up with another German immigrant from Hanover, two years his senior, named Henry Wichman.   Described by contemporaries as “of medium size, fair and rather heavy set and reserved and quiet,”   Wichman appears to have been an excellent foil for the more flamboyant and outgoing Lutgen.  They called their firm the Wichman, Lutgen & Company, the name it bore until its demise.

With only modest amounts to invest, their first location was a store front at 809 Montgomery Street, described as an “out the way” district of San Francisco.  They remained at that address for two years then relocated to 321 Clay Street.  Those quarters soon became too small and in 1879 the partners moved across the street to 318-320 Clay, between Front and Bradley, as  noted here on a 1891 trade card.  The card identifies the firm as importers of wines and liquors and manufacturers of Dr. Forester’s Alpine Stomach Bitters.

The Wichman, Lutgen Company featured Gilt Edge Whiskey as its flagship label and merchandised it as Kentucky bourbon,  My surmise is that the partners were rectifiers, that is, blenders of whiskey and that Gilt Edge was a blend.  In 1899

they trademarked the name, one that earlier had been used by an Illinois outfit.  They bottled Gilt Edge in clear glass flasks and in amber bottles, both painted and embossed.   Lutgen showed a flair for merchandising,  featuring fetching women on advertising signs for his whiskey and at least once, shown here, giving advertising space to a local shoe store.  Fancy monogramed shot glasses were another giveaway item to customers.

In 1904, the firm incorporated with a value of $250,00, several million dollars by today’s reckoning.  Each partner received 3,998 shares, valued at $25 each.  About the same time, once again needing more space, the company moved to the Battery Street address.  The number of brands emanating from the firm continued to expand.  Among them were "Autocrat,” "Foerster's Whiskey Co.,” "Forest Lawn,” "Forester's Malt Whiskey,” "Forrest Lawn Whiskey,” "H & H,” "Identical,” "Marin County Club Bourbon,” "Marin

Increasingly John Lutgen was being recognized as a major figure in the community.   He lived in the nearby suburb of Alameda where he owned, as one observer said “a beautiful residence on Santa Clara avenue, a neat cottage of modern architecture surrounded by a beautiful lawn set to shrubbery and flowers.”  He was a member of the Board of Library Trustees in Alameda and active in several German benevolent societies and Masonic orders.  Although Lutgen and wife Sophia must have mourned the loss of their sons,  their daughters grew to maturity and married well.  One son-in-law,  Frederick Staude, was taken into the firm and listed as its Secretary/Treasurer.  Life was being good to the Lutgens.

Then came that fateful morning in 1906.  Within 30 hours of the earthquake’s first jolt, a firestorm consumed much of San Francisco as an inferno swept through the city for three days. In all, more than 3,000 people died. Twenty-eight thousand buildings were destroyed over 500 blocks of San Francisco.  Property damage has been estimated at $235–500 million in 1906 dollars — equivalent to the entire 1906 Federal budget.  Today the amount would be between $4.8 and $10 billion.  Among buildings destroyed was the Battery Street structure housing the Wichman, Lutgen Company.  Going up in flames as well were thousands of barrels and cases of whiskey, the firm’s records and all its equipment.

if Lutgen was tempted to quit, he gave no indication.  Almost immediately he made plans 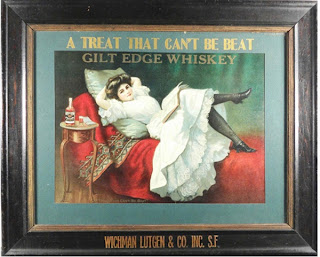 to relocate the company into temporary quarters at 431-439 Clay Street  to carry on the whiskey trade.  Meanwhile he planned, designed, and supervised the construction of a new building at 134 Sacramento Street.   The company moved there in 1911, its final home. Meanwhile its whiskey trade recovered gradually in the wake of the quake and fire. Wichman retired from the firm and Staude moved up the management ladder.  In a January 1913 trade magazine,  Lutgen reported that 1912 had been a very good business year compared to 1911.  Despite the “drying up” of certain territories, through an aggressive policy the firm had sold more goods than the prior year.  He said he looked forward to 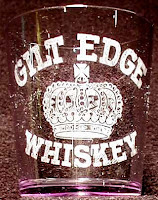 Despite his optimism, Lutgen did not survive the year.  In November 1913, at the age of 66,  in apparent good health,  he was stricken following a luncheon and died a few hours later.  At his graveside stood his widow, his two daughters and their families, grieving over his coffin.  Among mourners was his son-in-law,  Frederick Staude, whom Lutgen had groomed as his successor.  Staude would guide the firm for the next six years until it was shut down by Prohibition.

John Lutgen’s obituary, noting that his demise had been “a grievous surprise to everyone,” hailed his heroic post -catastrophe efforts both to

construct a new headquarters and greatly to extend and expand the reputation of his firm.  It was reputed to have become one of the leading mercantile houses of the Pacific Coast.  The writer added:  “In the passing away of Mr. Lutgen San Francisco loses one of her old-time merchants, a man who was respected by all for his integrity and loved for his just character.” 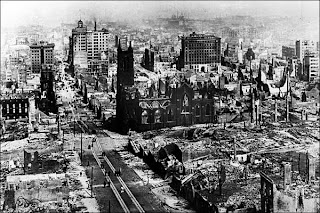