"The Friendly Sons of St. Patrick for the Relief of Emigrants from Ireland in 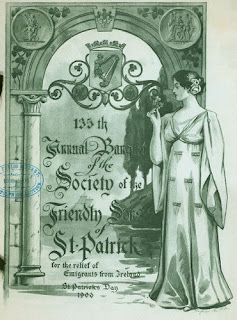 Philadelphia" is accounted the oldest extant fraternal organization in the United States,  founded in 1771 six years before the American Revolution.  Among its members over the years have been such worthies as George Washington and General “Mad” Anthony Wayne.  Three of its members,  the Mulherins,  whiskey men all and the subjects of this post,  must be counted among those luminaries.

We can speculate that William served a time in apprenticeship in the whiskey trade, probably working for one of the several Irish liquor dealers in Philadelphia.  In 1887, at the age of 39, William struck out on his own,  opening his whiskey business at 1355 North Front Street.  He called it William J. Mulherin Company.   When his sons John and Arthur had grown to manhood,  he took them into the company,  renaming it William Mulherin & Sons.  Later a third son, William, would join the firm. 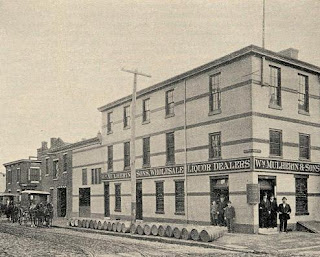 With business expanding,  the Mulherins moved their offices to the Southeast Corner of Front and Masters.  As shown above,  the company occupied a substantial three story building with their name prominently displayed.  My assumption is that  members of the Mulherin family are among those standing outside the doors.  This site would be the final location of the business. 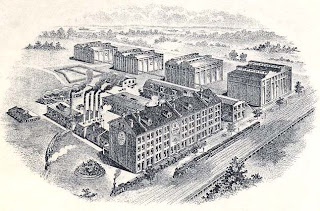 Mulherin & Sons were not distillers, although they may have claimed to be in some of their advertising.  They were importers,  compounders and rectifiers (whiskey blenders) who mixed raw whiskey products to taste,  bottled the result, labeled and sold it.  Like many rectifiers they  apparently found it difficult to arrange for a steady supply of alcoholic product from U.S. distilleries.  As a result, over time they found it  expedient to invest in distilleries and enjoy the rights of ownership.


The first was a distillery located in Union County, Kentucky.  It had been founded at a site on the Ohio River near Uniontown prior to 1878.  Eventually it was sold to a whiskey man named John Roach who specialized in supplying raw whiskey to a wide range of rectifying outfits.  After the distillery burned in 1890, for a loss of $50,000,  Roach sold out to  a combine that rebuilt the distillery.  According to testimony of an investigator before a Congressional committee looking into the “Whiskey Trust”:  “There are a number of dealers in Philadelphia who organized what is known as the Mutual Distilling Company to take care of themselves. and they are running their own plant in Kentucky, at Uniontown, and make their own alcohol and spirits.”   Among those owners were were the Mulherins.

Because the Kentucky-made raw whiskey was divided among several dealers, the Mulherins looked for yet another source.   This time they invested closer to home,  becoming part owners of the Philadelphia Pure Rye Whiskey Distillery in Bucks County, Pennsylvania.   As initially constructed in 1893, the distillery contained a single warehouse and two large stills, one wooden, one copper.  The wooden still had a capacity of 16,840 gallons and the copper held 2,554 gallons, according to insurance records.  The warehouse was six stories and constructed of brick with a gravel roof.  It held 14,000 barrels of aging whiskey. With the enactment of the Bottled-in-Bond Act by Congress,  it became a bonded warehouse and with time, as shown on an illustration above, other warehouses were added. 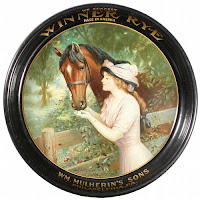 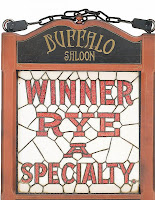 Now with an assured supply of whiskey for blending,  Mulherin & Sons began to advertise their brands widely in a four state area.    The firm’s flagship brand was “Winner Rye.”  The name was registered with the U.S. Patent Office and a Pennsylvania  government office in 1902 and again in 1904.   The company also used the name “Private Club Pure Rye.”    The Mulherins featured giveaway items to favored saloons and other customer, including tip trays featuring comely ladies and a paperweight that contained bar dice. 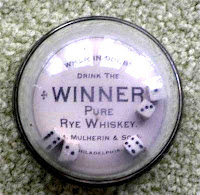 The Mulherins were a tight knit Irish family. The 1900 census found the entire clan living together at their home in Philadelphia.  Three of their sons were adults.  John and Arthur both gave their occupation as “liquor merchant.”   The first to join the Friendly Sons of St. Patrick was William. With his wife Mary he likely attended the organization's 1906 ball indicated by the program cover at the outset of this vignette.  He was followed into the Friendly Sons by John in 1909 and Arthur P. a year later.  By the 1910 census the Mulherin offspring had moved away from their parents but were living together with an older sister. None of the sons was married.

William died about 1913 and the following year the name of the company changed for a final time to “William Mulherin’s Sons Company.”   John Mulherin was tapped as the successor to run the business and became well known in Philadelphia.  In addition to his membership in the Friendly Sons of St. Patrick, he was a member of the Athletic Club of Philadelphia, the Catholic Philopatrian Literary Institute, the Philadelphia Lodge, No. 2 of the Elks, Fraternal Order of Eagles, Foresters of America and the Catholic Historical Society.  He was also president of the Founders and the Integrity Building and Loan Associations, and a director of the Consumers' Brewing Company of Philadelphia.  John was accounted to be a staunch Democrat. 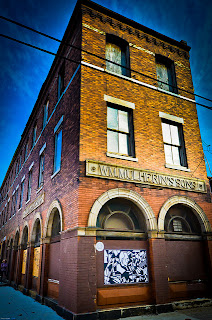 He had only a few years of running the liquor business before it was shut down by Prohibition.  But the Mulherin heir took that time to remodel the building which housed the firm.  He added new brick facing to the building and a series of arched window treatments.  The structure still stands and bears a terra-cotta sign of the company name.   It long has been vacant and it appears that its last use was as a liquor establishment.

With the onset of Prohibition the family, as did other whiskey men, went into the automotive business.  They founded Mulherin Brothers and ran the Regent Garage, located at 4518-4526 Baltimore Avenue.   John became the senior member of that firm, along with Andrew and Frank.   When he died in 1925,  following an unanticipated terminal condition after suffering a compound fracture of the ankle,  John was accorded a wake at the home of brother Andrew at 2350 Broad Street.  That was followed by a Requiem Mass at the Church of Our Lady of Mercy.  His obituary primarily remembered him as “a well-known former liquor merchant.”

That is how we can remember all the Mulherins,  successful whiskey men and “Friendly Sons of Ireland.”

Posted by Jack Sullivan at 8:07 AM