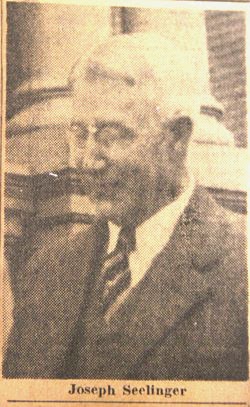 Joseph “Joe” Seelinger, shown here, was well known in Norfolk, Virginia, as a saloonkeeper and restauranteur. But his real claim to fame around town was as a favorite duck hunting companion for the former two-time U.S. President, Grover Cleveland.  Linked in life, the two almost were united in death as they narrowly escaped drowning in March, 1901, attempting to return from a day of shooting.

Seelinger had hailed originally from Erie, Pennsylvania.  He was born there during the midst of the Civil War in 1863.  His parents were Joseph and Elizabeth (Stemmer) Seelinger, both Catholic  immigrants from Switzerland, who arrived in America about 1850.  The father was an Erie saloonkeeper and also for a short time may have operated a brewery known as the Erie City Brewery. The record shows a Joseph F. Seelinger operating a brewery on Poplar Street between 25th and 26th Sts. from 1870 to 1872.

At the time  of the 1880 Census,  the Seelinger family had seven children, three girls and four boys.  Joseph was the eldest son, at the age of 18 recorded as being “at home,” which almost certainly meant he was still going to school.  His three younger brothers,  Henry, Steven, and Anthony also were in school.

From that time until he showed up in Norfolk in the late 1800s,  Seelinger’s activities are obscure.  It is likely that as he matured his father employed him in his saloon and the youth learned the whiskey trade there.  At the age of  30 Joe found a wife.  She was Laura, born in Pennsylvania of German immigrant parents.  The Seelingers would go on to have a family of five children, three boys and two girls. 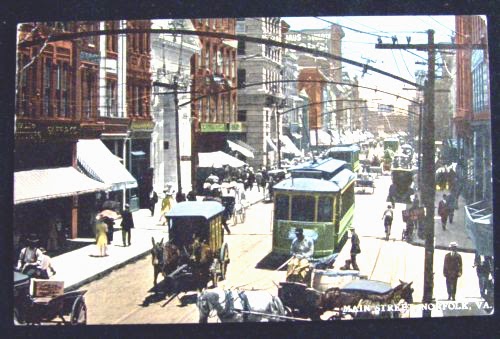 Joe also must have been saving his money because he was first recorded in Norfolk as the proprietor of the Onyx Saloon, located initially at 221 Main Street.  His choice of a location for his drinking establishment indicated that he had both good sense and the financial wherewithal to site it in the heart of the city’s bustling commercial district.   As shown above in a postcard view, Main Street was thronged with pedestrians,  horses and buggies, and on a main streetcar line.

The saloon occupied the ground floor of the Onyx Building,  constructed in 1894, apparently with financing and supervision from Seelinger himself.  Several years later Patrick Mathews, a civil engineer, hauled the saloonkeeper into the local Court of Law and Chancery,  claiming that he was owed $125 for the plans he had furnished Seelinger for the construction of the building.   After a day long trial, the jury was unable to agree on a verdict.  The elaborate interior of the Onyx Saloon is shown here on a trade card, apparently with the proprietor, Seelinger himself, standing in front of the bar.   Note the fancy chandeliers and electric ceiling fan. 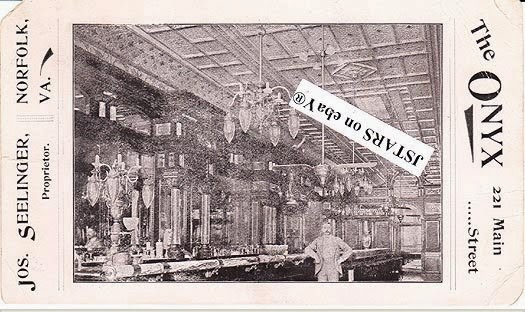 That saloon apparently proved to be too small to accommodate a growing clientele.   Subsequently Seelinger moved to larger quarters, still on Main Street, at 411 East.  But there is something curious about the situation.  The proprietor issued a photograph of the new Onyx on a desk blotter, shown below, that provides the mystery.  Although the address differs from 221 Main, the interior looks virtually identical to the earlier establishment.  It does appear, however, that the bar at the new saloon extends somewhat farther and that the saloon front is glass enclosed.  My conclusion:  Seelinger took the accouterments of his old saloon with him when he moved and recreated the decor at 411 East Main. 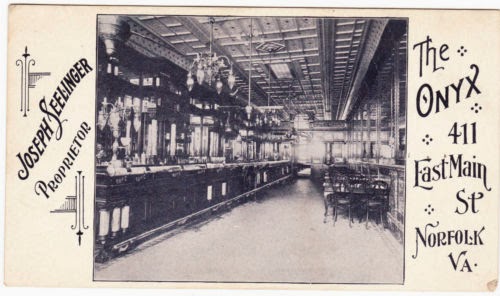 The new address also featured an equally elaborately decorated restaurant on the second floor that became a favorite dining spot for the rich and socially prominent of Norfolk and the Tidewater.  One writer said of the Onyx that it “became widely known throughout the city by fastidious diners with whom cost was not a factor.  In the gay days of Norfolk his [Seelinger’s] place was the center of fashionable gatherings, especially around the holiday season.”

In fact, Norfolk was becoming a town of Seelinger saloons.  Perhaps drawn there by the success of Joseph,  three of his brothers opened their own establishments, possibly with his financial backing.  Henry owned H. Seelingers Stag Hotel and Ladies’ and Gentleman’s Cafe and Restaurant,  located 39-41 City Hall Avenue.  He advertised:  “Everything the Best.”  Brother Steven ran Steve Seelinger’s Cafe at 10 Bank Street, “In the Heart of the Business District.”  Even the youngest brother, Anthony, could boast his own watering hole.

Meanwhile, the Onyx Saloon was making Joe the genial saloonkeeper very rich indeed.  He was able to indulge his passion as a sportsman and duck hunter.  The marshlands east of Norfolk were a favorite wintering grounds of millions of ducks of a wide range of species and hunting clubs proliferated.  A prime location was held by the Back Bay Gunning Club of which Seelinger was president and treasurer. It had been chartered by a local judge in 1899.  One report indicates Joe owned it with one of his sons. 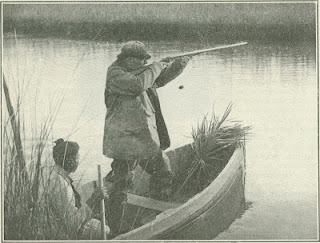 Enter Grover Cleveland, the 22nd and 24th President of the United States and the only President to serve two non-consecutive terms (1885-1889 and 1893-1897).  Always a sportsman and hunter, with a passion for shooting ducks,  even as President-elect in December 1892, he traveled to Broadwater Island on Virginia’s Eastern Shore to hunt,  accompanied by friends and a sketch artist.  He is shown here on one of his expeditions.

After declining to run for a third term and leaving the White House, Cleveland lived in retirement at his estate, Westland Mansion, in Princeton.  That gave him plenty of time to indulge his sporting desires.  How Cleveland connected with a Norfolk saloonkeeper is not clear but the two quickly became hunting partners and the former president was a frequent guest in Norfolk.  Every time Cleveland arrived Seelinger would entertain him, either in his home or at the Onyx Saloon where, as one author put it, “Cleveland regularly gorged on game and seafood.”  Then the pair would head out to the Back Bay Gunning Club. 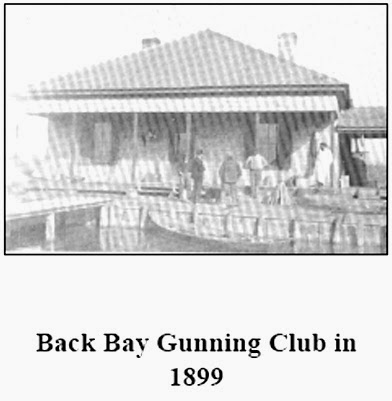 Cleveland clearly loved those sojourns.  In retirement he wrote a thin book called, Fishing and Shooting Sketches.   In it he describes in detail a duck hunting trip he took to Virginia:  “We arrived at the very comfortable clubhouse of the Back Bay Club in Princess Anne County about noon one Saturday.”  After spending several days there waiting for appropriate weather the party finally got on the water and shots dozens of ducks.  Although the shooting was the high point for Cleveland, he also cast an admiring eye at the gunning club.  “So far as the good things and the comforts of the clubhouse itself entered into the enjoyment of our trip, it would be strange if they did not present great allurement; for nothing in the way of snug shelter and good eating and drinking was lacking.”   Joe Seelinger clearly had thought of everything. Shown here is an illustration of Cleveland scanning the horizon for prey while being steered in a sail dingy to the hunting grounds, towing the decoys in a rowboat behind. My assumption is that it is Seelinger at the helm.  It was on just such a trip that the two almost lost their lives.  Papers across America like the San Francisco Chronicle of March 1, 1901 headlined:  “Grover Cleveland is Caught in Storm;  Former President Narrowly Escapes Drowning While Duck Shooting.”    The story went thus:  Cleveland and Seelinger were far out on the water having shot 75 ducks and many geese and pigeons.  The weather threatened.  The ex-President refused to leave before nightfall and by then a full fledged storm had arisen. The boat was nearly swamped by high wind and waves.  Apparently through Seelinger’s skill at the helm, after considerable time and in full darkness the two were able to make shore.

Cleveland appeared to be unfazed by the experience.  Supping at the Onyx the following evening, he was in an expansive mood and even agreed to a press conference.  After Cleveland had discussed several subjects, one reporter noted that he had just dined in a private room over Seelinger’s “splendidly appointed” Onyx Saloon. He then asked what the former President thought of Carrie Nation’s saloon smashing crusade.  Cleveland looked flustered but finally said:  “That is a social question upon which I am not qualified to speak.”  That evening the former chief executive took the train back to Princeton.  The dead ducks had gone earlier to New Jersey, addressed to his wife.

For Seelinger there would be limited future hunting escapades with Cleveland.  The former President’s health soon began to decline.  In 1908 he suffered a heart attack and died.  Seelinger must have mourned the passing of someone who had been a companion and, moreover, put The Onyx Saloon into the national spotlight.  Another blow occurred in 1916 when Virginia by referendum went “dry” (Norfolk had voted NO). Seelinger and his brothers all were forced to close their saloons. By that time Joe was 53, wealthy, and doubtless had other investments to tend.

Seelinger would live another 24 years at his mansion home along fashionable Mowbray Arch, the street shown above,  living through National Prohibition and witnessing its repeal.  When he died in

October of 1939 at age 76, he was buried in Norfolk’s Forest Lawn Cemetery beside his wife, while his four surviving children and his grandchildren stood by the gravesite.  Even in death Joe remained identified with Grover Cleveland. Their relationship was the first line in Seelinger’s obituary in the Norfolk Pilot.