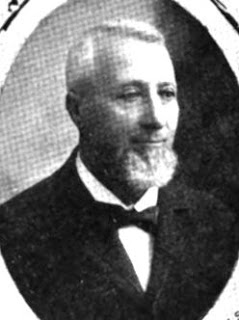 When a man has eleven children he has to find a way to support his family. Ferdinand Westheimer made his livelihood in the liquor trade beginning in St. Joseph, Missouri, by advertising throughout America a whiskey he labeled “Red Top Rye.”  As a result, Westheimer not only grew wealthy, he created lucrative opportunities for his eight sons.

Ferdinand was born in Darmstadt, Germany, the fourth son of Leser and Bessel (Kahn) Westheimer.   With his family in straitened circumstances and seeing little opportunity in his native land,  in 1847 at the age of 22,  he emigrated to the United States,  possibly accompanied by his younger brother, Samuel.    The 1850 U.S. Census found him living in New York City,  his occupation given as “peddler.”

At some point between that time and 1861,  Westheimer moved to St. Joseph, Missouri.  He had made a good choice.  Ever since the 1840s,  “St. Joe,” as it is popularly known, had been booming.   Initially the growth was generated by the covered wagons, oxen and supplies purchased by pioneers on their way West across the Missouri River.  Another economic boost was provided 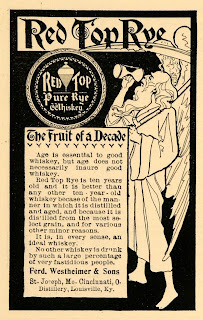 when railroads reached the city, making it a supply and distribution point to the entire western half of the United States.  Situated next to water that ran to the ocean as well as accessible by land and rail, St. Joe experienced what one historian has called “phenomenal growth” throughout the 19th Century.

In January 1861, Ferdinand, now age 36, got married.  His bride was Sarah Flarsheim, herself an immigrant from Germany.  Born in 1841, Sarah was 16 years younger. The couple immediately began growing their family.  Eugene was born in November of that same year.  Morris followed in 1863, Isadore in 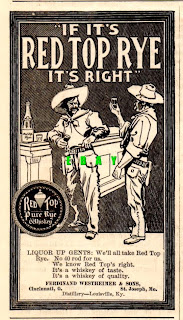 As his family size increased, Westheimer was advancing from peddler to established merchant.  By 1868 he became co-owner of a grocery, tobacco and liquor store in St. Joseph.  Before long he determined that his principal opportunity lay in the wholesale liquor trade.   Partnering with his brother Samuel, he opened a firm called Westheimer Bros. in 1871.  Over time they operated at several addresses on St. Joe’s South Second Street.  In 1878, however, the brothers parted ways.  Samuel kept the original business and the name, while his elder sibling struck out on his own in a liquor dealership he called “Ferdinand Westheimer & Co.”

The reason for the split may have been Ferdinand’s desire to bring one or more of his sons  into the business.  Eugene was the first to join the company, followed by Morris and Leo.
In time all the Westheimer boys would be incorporated into the operation except Isadore who had died before his 13th birthday.  Reflecting the addition of his boys, the father in 1887 changed the name on the door to “Ferdinand Westheimer & Sons.”

As whiskey wholesalers,  the Westheimers also were rectifiers, that is, blending and compounding raw whiskeys to taste,  creating their own brands, and merchandising them.  Among them were such labels as “Boston League,”  “C .C. Bond,” “Clover Brook,” “Manhattan Reserve,” “McAllister,” “Number One,” “Old Hutch,”  “Planet,” “White House Club,”  and “Pullman Rye.”   Far and away the most featured brand was “Red Top Rye.”  As shown here, it was advertised in newspapers and magazine coast to coast, often with the motto, “If it’s Red Top, It’s Right.”  The whiskey might be presented with a Father Time/Avenging Angel drinking from an hour glass,  a ominous sickle on his shoulder, or cowboys in tough guy poses. As shown here, Westheimer packaged Red Top and other brands in glass quarts, pint flasks, and miniature bottles.

As the reputation of Red Top Rye grew, the need for a steadier supply of whiskey for blending became evident.   In 1897 Westheimer purchased a controlling interest in the Old Times Distillery of Louisville, Kentucky.  At that time, according to insurance records, the property included a single brick warehouse with a metal or slate roof, located 370 feet southeast of the still.  Within several years a new plant had been built across the street from the original distillery, located at the corner of 28th and Broadway.  He named it “The Number One Distillery.”  Westheimer also opened an liquor outlet in Cincinnati, Ohio, at 317-319 Main Street and called it his “Eastern Offices.”   Just as St. Joe was a window on the West,  so Cincinnati was a major center for whiskey flowing Eastward.   The Westheimer liquor “empire” was well illustrated on a letterhead from 1904. 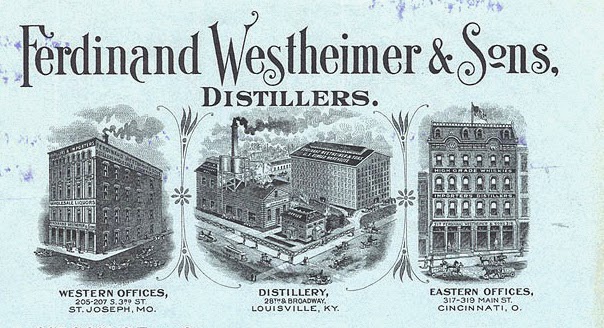 While Eugene stayed in Missouri with his father, Morris and Leo, and later the youngest, Irvin,  were dispatched to run the operation in Cincinnati.  All of them would make Ohio their home for a lifetime.  Henry and Milton Westheimer went East to Baltimore where the Westheimers also had financial interests.  Henry was recorded there as a vice president of the Cahn Belt Company (see my post on Eugene Belt, August  2013).  Sydney and David, as they came of employment age, remained in St. Joe,  working at  the 117-119 South Third Street offices.  Ferdinand had found productive employment for all his boys.  One obituary cited his “Success...in the rearing of a family of sons who honor him in their records and achievements.” 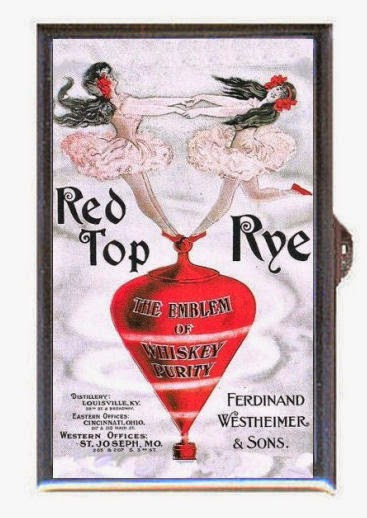 According to city directories,  Ferdinand Westheimer  & Sons also operated a branch in Minneapolis from 1890 to 1914, apparently seeking a conduit for its whiskey into the Northern Tier of states.  Initially located on Nicolet Avenue,  eventually the office moved into a suite in the Met Life Building.  Now that he had spun his Red Top Rye from coast to coast, Westheimer was accounted in St. Joe as one of its millionaires.

As Red Top Rye became a top seller in America,  the Westheimers, like other whiskey wholesalers, 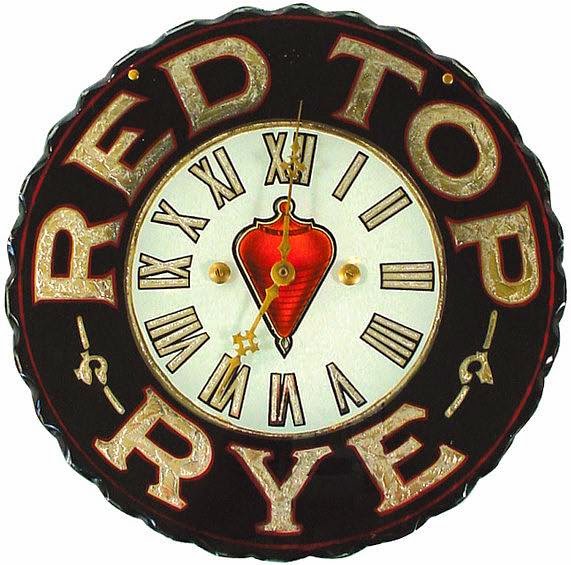 provided a wide range of giveaway items to favored customers.  They included Red Top shot glasses, Red Top goblets and Red Top match safes.  Among the most impressive was a Red Top saloon clock.  The face was a reverse-on-glass with numerals in silver against black around the perimeter of the face.  The hands spun on the Red Top.  There could be no mistaking which whiskey was telling time to the faces along the bar.  Another major gift item was

an elaborate under glaze transfer ceramic bottle advertising Pullman Pure Rye, featuring a railroad passenger car as the principal motif.  Whether this was meant as a back of the bar bottle or for some other use is not clear.  Today this Westheimer issue is a highly sought and valuable American whiskey ceramic.

Even as he grew older, Ferdinand Westheimer never ceased to take an active interest in the operations of the wholesale liquor company he had founded.  For his 80th birthday, his employees presented him with a silver punch bowl and ladle, both decorated with rabbits. The 1910 U.S. Census found him at age 84 living in a mansion at 1723 Francis

Street, a home he had built for his burgeoning family in 1885. Designed by the architectural firm of Eckel and Mann,the house is shown here as it originally appeared, a marvel of multiple porches and chimneys with a three-story tower.  Occupying the mansion with him were his wife of 49 years, Sarah; two sons, Sidney and David;  Sidney’ s wife, Grace; and five servants.  Ferdinand gave his occupation to the census taker as “merchant - liquors.” 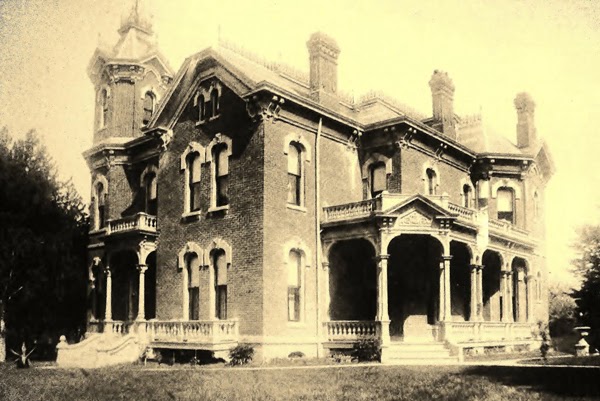 Three years later, at age 87, Westheimer died and, as his grieving family looked on, was buried in St.  Joe’s Adath Joseph Hebrew Cemetery.  After his death his sons carried forward the family business interests.  But Prohibition forces were closing in. The firm was taken to court in dry states like Kansas for whiskey shipments and although it had won,  the effort was expensive and discouraging.   Anticipating the advent of National Prohibition,  Ferdinand Westheimer & Sons in 1919 shut down its operations in Louisville, Cincinnati and St. Joseph.  The sons either retired or sought employment in other fields.  Irvin Westheimer in Cincinnati became noted for founding the “Big Brother, Big Sister,” program.  The Francis Street home still stands.  Operating today as a bed & breakfast,  it is appropriately named “Whiskey Mansion.” 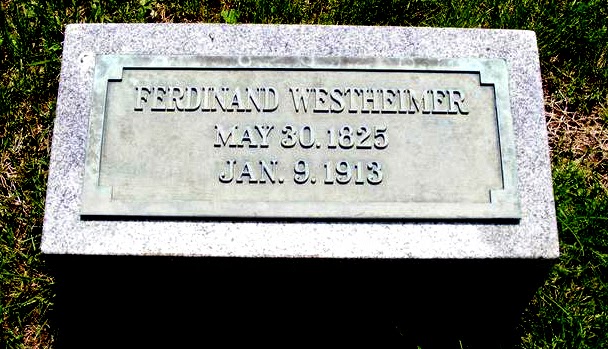 Ferdinand Westheimer himself deserves a last word. Among the outpouring of tributes to him at his death was one published in the National Bulletin of the Liquor Dealers Association.  Here are excerpts:  “Coming from his early home of restricted efforts to a land of promise and opportunity, his pioneering efforts were rewarded.  Through trials and difficulties he pressed valiantly onward to honorable success....High repute, splendid family, devoted friends, material fortune, all were his, and well did he merit and prize these unusual blessings.”  In short, he spun the Red Top and won the game.