From Revolution to Renziehausen: A Large Whiskey Saga 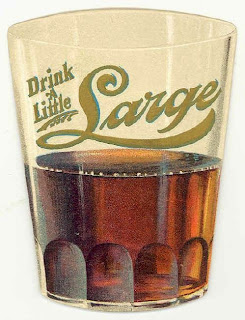 The family name was Large, immigrants from a French Huguenot (Protestant) background who came to America when it was still a British colony.  Among them were Samuel Large and his wife, Amy, who settled in New Jersey.  Their son, John Large, served as a soldier in the Revolutionary War.  After the end of the conflict in the early 1790s John moved to Allegheny County, Pennsylvania, bought a farm and built a distillery.  This launched the Large family into three generations of making quality whiskey.  They were followed by a non-family member who built on what the Larges had accomplished and made their name known throughout the United States.

Western Pennsylvania at the time when John Large arrived was a hotbed of rebellion against the taxation imposed on whiskey by the newly created national government.  Things boiled over in 1794 when President George Washington, in his role as Commander in Chief, rode out with troops to quell the rioting.  Large does not seem to have been among the rebels, paid his whiskey 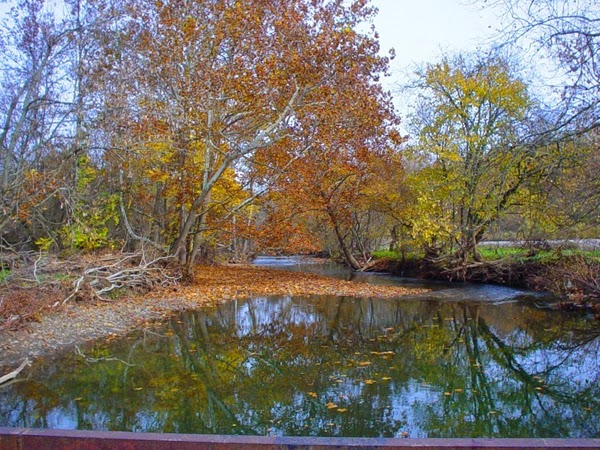 taxes and, with wife, Nancy, raised a family of seven children.  Among them was Jonathan Large. He married Easter Finney, bought a farm and, like his father, operated a distillery.  Jonathan subsequently sold that property and bought a bigger farm in Jefferson Township of Allegheny County. It was located on Peters Creek, shown here.  Jonathan established his second distillery there, using the wheat and corn from his fields to make his whiskey.

When Jonathan died, the property ultimately devolved on his youngest son, Henry Large, who called himself “Junior” after an uncle.  Born on the Fourth of July 1836,  Henry was raised on the farm and apparently from his youth was involved in the distilling operation.  An observer later described the setting:  “There were fine springs of pure soft water on the property, which nestled cozily against the mountain, and fronted on the old country road for a long distance, until it crosses Peter’s Creek, a tributary of the Monongahela River.”

Although picturesque, Henry Large’s distillery suffered from severe disadvantages.  To get his products to market required teams of horses or oxen to haul them five miles over rough mountain roads to the railhead.  Nonetheless, Large was able to sell his whiskey to a regional market.  A “History of Allegheny County” published in 1889 said of Large:  “He is engaged in the manufacture of Monongahela rye whiskey, the brand having been established by his grandfather, and has a national reputation for excellence.”

While the national reach of Large whiskey may have been exaggerated, it clearly was a superior product.  In his 1928 book, “The Case for Whiskey,”  George Coes Howell, a whiskey man himself, recounted how in 1891 he first tasted Large rye and found it extraordinarily good.  He was told that the whiskey was made back in the mountains and that the output was purchased mainly by neighbors and people in and about Pittsburgh. Intrigued, Howell made further inquiries about the Large’s whiskey:  “I learned that though it had the highest reputation for quality in the homes and clubs of the old families, it was not much handled by the trade, as it was not a “blending” whiskey.  It had a fine flavor and aroma, but it was too light- 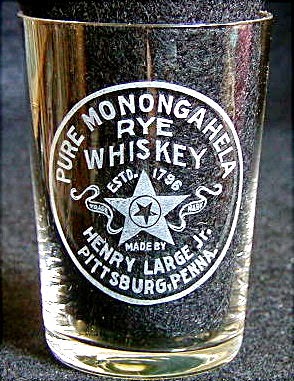 bodied for blending purposes, so the trade was not especially interested in that period when 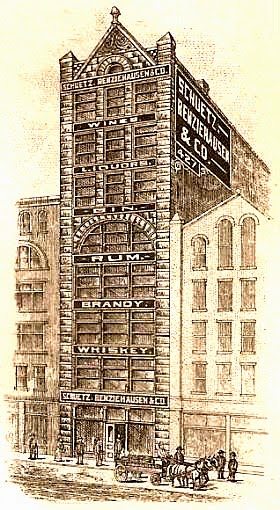 Even if “the trade” was not interested, a whiskey man in Pittsburgh was.  His name was Frederick C. Renziehausen, a partner in a wholesale liquor company founded about 1880 that eventually occupied an eight-story building on 427 Liberty Street, shown here. Renziehausen in 1884 purchased an interest in Henry Large’s distillery. During the lifetime of the owner, the liquor dealer is said never to have interfered in any way in the making of the whiskey or the manner of its merchandising.   When Henry died in 1895, however, he purchased from his estate the farm, distillery, old family formula for the whiskey, and the rights to use the name “Large.”  Howell described the property at that time:  "The old farmhouse was in fairly good condition but the distillery buildings were old and dilapidated."

Now the sole owner, Renziehausen in 1897 set about vigorously to modernize and expand the facilities.  A new distillery was built and up-to-date warehouses added.  He also began a campaign to make his product known wherever rye whiskey was being exhibited.  After a small showing by the Large Distilling Co. at the Chicago World’s Fair in 1893 brought considerable attention, Renziehausen seldom missed an opportunity to show his wares.  His whiskey won Grand Prizes with their attendant gold medals at Paris in 1900;  St. Louis, 1904; Liege, 1905;  Milan, 1906; Jamestown, 1907; Brussels, 1910; Ghent, 1913; London, 1914, and San Francisco, 1915.  Renziehausen regularly trumpeted those honors on his ads, bottles and even crates of Large Monongahela Rye.

The Large Distilling Co.was now fully in the forefront of the American whiskey trade.  It boasted four fireproof warehouses, ranging from 10,000 to 16,000 barrels capacity, racked and steam-heated to maintain the same temperature, winter and summer.  The bottling facility was described as containing the latest machinery for labeling, capping and casing the whiskey, each operation carried on in assembly line fashion by a conveyor system.  Just as important,  the arduous trip over mountain roads to the railhead was no long necessary.  The Wabash Railroad’s eastern connection had been built along Peters Creek with a siding leading right to the distillery.  This made it possible to unload grain directly from freight cars to the distillery and for cases of whiskey to be conveyed to a shipping platform and into freight cars.  Further attesting to the modernity of the Large distillery was a laboratory with a graduate biologist in charge to propagate the yeast scientifically and supervise fermentation.

When fire destroyed the distillery building in 1907,  Renziehausen immediately replaced it with a larger one.  By 1910, according to Howell, “The Large distillery had become one of the most modern and efficient distillery plants in the United States, with freight facilities second to none.”   The facility is shown here in a company ad.  Note the train entering right.  As the Larges, from John to Jonathan to Henry, slumbered together in the Lebanon Church Cemetery nearby, they surely would have been astonished at the changes wrought in the whiskey manufactory they had founded.

The coming of National Prohibition obviously changed everything.

Renziehausen, however, was allowed ship his products overseas.  In 1923 he received U.S. Government permission to ship Large Monongahela Rye to the World’s Fair in Rio de Janeiro, Brazil.  It was seen as a bitter irony that, while illegal in the U.S., Large rye won another Gold Medal there, beating out the best whiskeys made in other parts of the world. Going out with that blaze of glory, the distillery was shut down.  Its termination closed out a 127 year distillery history, one lasting from the aftermath of the American Revolution to the onset of Prohibition, a record to be envied and one seldom equaled. 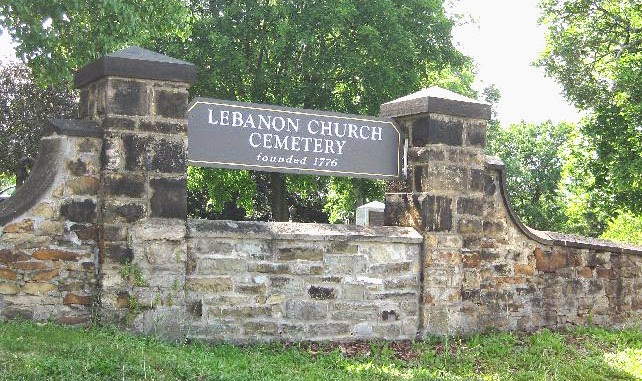 Note:  Much of the information about the Large Distillery is from the 1928 book by George Coes Howell.  Howell, who had worked extensively in the whiskey industry, sought to show how Prohibition actually had resulted in more drinking of inferior and even injurious liquor.  He featured the Large saga to emphasize the quality of pre-Prohibition distilling.