Foreword:  A number of whiskey men —distillers and liquor dealers — during their working years also showed a bent toward animal husbandry.  Most commonly distillers had pens associated with their whiskey-making, feeding their spent mash to cattle being fattened for the dinner table.  Others seemed to have had more affection for their animals.  Here are brief stories of three such men. 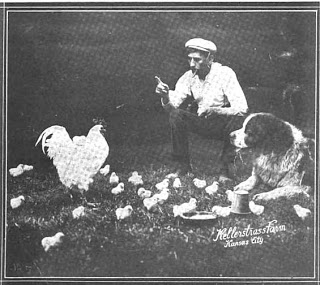 As hard as it may be to believe, the young man with the cigar shown here talking to a rooster and surrounded by newly hatched chicks had an earlier, highly successful career as a distiller and liquor dealer in Kansas City, Missouri. His name was Ernest Kellerstrass, a man who truly loved chickens.

Kellerstrass, still in his 30s, showed extraordinary initiative.  About 1899 he established his company and located his main office in Kansas City, selling stock in the Kellerstrass Distilling Company at $10 a share.  He also bought a distillery in Paradise, Clay County, Missouri, that had been founded about a decade earlier. Through his distillery he was able to insure a secure supply of raw whiskey for his brands.  With success he created a separate sales depot across Missouri in St. Louis.  As shown below on his letterhead,  Kellerstrass emphasized his access to railway express to send his goods west from Kansas City and east from St. Louis.

Inexplicably, in 1904 and at the height of his success, Kellerstrass, still short of 40 years old, sold out his distillery and mail order liquor empire to a syndicate from St. Louis.  Meanwhile, Kellerstrass with wife and family retired to his chicken ranch outside of town.  He built new chicken houses according to his own design and began to breed a superior kind of poultry.  The eggs from the Kellerstrass Farm became known region-wide for their freshness and quality.  Shown below is truckload of his eggs on their way to consumers. 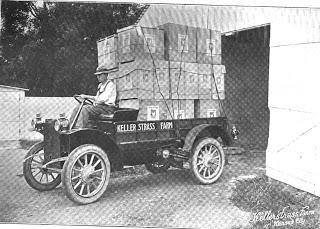 Soon many in America would know about Kellerstrass and his chickens. In 1910, after only a few years in business,  he self-published a book called “The Kellerstrass Way of Raising Poultry” and charged $1 for it.  The picture that began this article, showing the author talking to a rooster, was on the cover.

Clearly very proud of the progress he had made with his chickens, the book is full of advice to poultry raisers.  Kellerstrass introduced the volume by saying:  “It has been constant aim in writing this book to use common sense, and to give the public as much good practical advice as I possibly could,  and remember, that this book was written by a man who is out working with his chickens ever day. 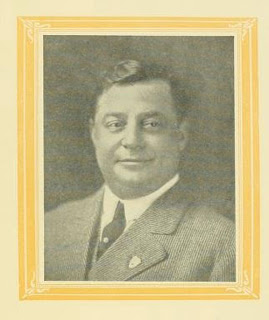 Milton L. Eppstein, shown here in 1914, had two evident passions in life, good whiskey and Jersey milk cows. He managed to combine the two into a Fort Worth, Texas, liquor business that exhibited both financial success and a distinctive bovine flavor. In short, he succeeded in mixing whiskey and cream.

When Eppstein selected a flagship brand, he looked to his hobby for inspiration. He had fallen in love with the Jersey cow, a breed known for its docile disposition, lovely eyes, and high butterfat cream. His stock farm became known as one of the finest in the Southwest. It was no surprise then when Milton named his select whiskey, “Jersey Cream.” 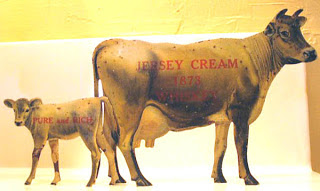 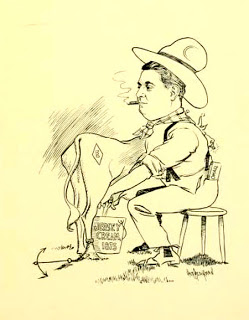 Eppstein’s bovine passion was most evident in a pair of freestanding metal signs advertising Jersey Cream, cut in the form of a cow and calf. The cow stood almost four feet tall and the calf was two feet.  So notable were Eppstein’s metal cows that they were taken by members of the Fort Worth Ad Club to Toronto upon the occasion of the 14th North American convention of advertising men. As a result, Milton was twitted in a contemporary publication for being the owner of a herd of iron cows and “sacred bovines.” A 1914 caricature showed him at his favorite pastime.

Nevertheless, time was running out for Milton and his Jersey Cream Whiskey. In 1916 Texas voted statewide Prohibition and L. Eppstein & Son became history. Eppstein retired to New York City, listed as living on Seventh Avenue by the 1920 Census. Death came five years later, while Eppstein was on a visit to Fort Worth, likely to visit his beloved herd of Jersey cows.

In 1903, with a partner, Henry Figge opened a wholesale liquor house at 353 East Water Street in Milwaukee, Wisconsin.  Figge’s company quickly met with success.  His flagship brand was Custom House Rye, with a label that featured the very elegant Milwaukee building.  Dating from 1855, it had been constructed by the U.S Department of the Treasury after the design of the noted architect Ammi Burnham Young.  The building still stands. 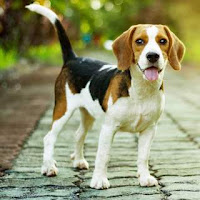 Figge’s animal interests involved both canine and porcine. Known as a dog fancier, the 1905 Field Dog Stud Book listed him as owning a champion beagle named “Foster Rye,” likely named by him for rye whiskey.  Registered as a “black, white and tan,” Foster Rye had a long pedigree.  Its sire was “Bellman”, out of “Florist” and “Bashful”;  its dam was “Staley’s Rubber” out of “Staley" and “Sailor’s Ranney.” 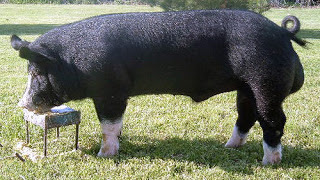 Seemingly ever restless, Figge, now with considerable wealth, retired from the liquor trade entirely in 1914 and bought a large farm on Cold Spring Road in Milwaukee County not far from the village of Hales Corners.  There he raised Poland China hogs.  The oldest American breed of swine, Poland China hogs are typically black, sometimes with white patches, and are known for their large size  For a dozen years Figge was known throughout the Upper Midwest for his prize-winning pigs.  In 1926, perhaps in declining health, he sold his farm and moved back to Milwaukee where shortly after he died.

Posted by Jack Sullivan at 4:33 AM