The Lowenbachs: Whiskey in Three Generations

A name that continues to arise in the liquor trade in both Virginia and Maryland is Lowenbach.   While not all the details are clear,  there is sufficient information to give us substantial clues to the family and their activities, including the bottles and artifacts they left behind.

The story begins in Harrisonburg, Virginia with a merchant there,  probably a liquor dealer, name Moritz (aka Morris) Lowenbach.  The 1860 census recorded him as born in 1825 in Konigwart, a spa town in what now the Czech Republic.  After emigrating to the U.S. and settling in Virginia, the Lowenbachs became an established extended family in Harrisonburg.  One Jonas Lowenbach was recorded as a sucessful tanner and a founder of the Rockingham Bank.   At the time of the census Moritz was 35 years old and married to a Virginia-born woman named Sarah, who was eleven years his junior.  At that point they had no children but three years later Sarah would give birth to a boy they named Charles.  Soon this son would have a sister Lillie, also known as Lizzie.

About 1870,  Moritz moved from Harrisonburg to Baltimore where a brother, unnamed, was living and began a liquor business there.  He called it Moritz Lowenbach & Co.  Over the years the company moved several times to addresses on West Pratt Street and South Howard.  The company flagship brand was “Old Pimlico,”  a familiar Maryland name.  Another brand was “Old Private Stock,” as on the flask shown here.

Sometime during this period,  Sarah died.  Perhaps wanting a mother for his children,  Moritz is recorded as having married a second time.  This time his wife was Bertha, a woman 18 years younger than her husband, an immigrant from Germany.  She gave birth to two more children, Joseph and Emma.  Evidence is that she was a loving stepmother and the two sets of children appear to have been close.

As Charles Lowenbach was growing up,  his father brought him into his liquor business.  Eventually, perhaps when his father’s Baltimore firm went out of business in 1898, the son moved to Virginia, the state of his birth, and began a liquor dealership in Alexandria.  He brought his younger half brother, Joseph, into the business with him.  They called their liquor dealership Lowenbach Brothers. The business was located at King and Alfred Streets in what now is Old Town, Alexandria. 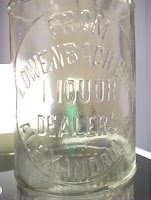 The Potomac Bottle Club has listed a number of bottles from this firm, including a 9.5 inch round glass jug with ears and a wood handle. It advertised “Virginia Rye Whiskey”  Other glass containers included a “lady’s leg” quart with a fluted neck and base. A detail of the face of that bottle proclaims: “From Lowenbach Bros. Liquor Dealers, Alexandria.  A straight necked bottle with the same slugplate also has found its way into local collections. 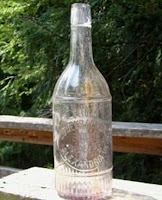 Lowenbach Bros.’ flagship whiskey brand was "Wakefield Rye,"  a label they advertised widely in Alexandria newspapers.   A 1910 ad shows the partners were not modest in their claims.  It trumpeted that Wakefield Rye was the “Best Medicinal Whiskey” and that their store was the headquarters for the “Best Wines and Liquors in the City.”  A second ad claimed that “If You Want a Good Medicinal Whiskey -- the Right Kind”  you should drink theirs.

As many liquor dealers of that time,  the Lowenbachs issued giveaway items to favored customers.  Among them was a celluloid pocket mirror with a striking picture of the Greek goddess of the hunt, known as Diana.  A close-up of the item shows that it advertised Wakefield Rye,  clearly a lower end whiskey at $4.00 a gallon. 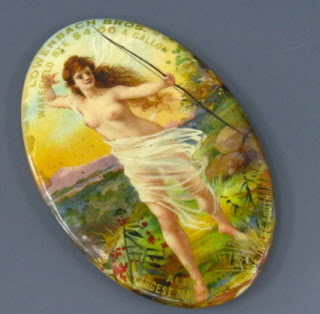 Meanwhile, one of the Lowenbach Bros., Charles,  was having a personal life. About 1886, according to census records, he married India Lewis.  They would have two sons,  Maurice R., born in 1892 and Lawrence, born in 1893.  As the business progressed, Charles and his family moved to Leesburg, Virginia.  Brother Joseph, who may never have married, was recorded living at 900 King Street with a manservant. 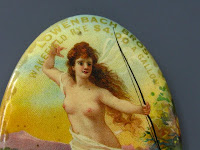 Lowenbach Bros. appear to have established another whiskey dealership in Culpeper, Virginia.   The DC bottle book records a labeled half pint that advertises “Pure Old Country Brandy from Lowenbach Bros. of Alexandria and Culpeper.   That designation and other clues indicate that the “mystery bottle” shown here with Taye Griffin, the man who dug it, was a product of Lowenbach Bros.  It is embossed in large letters “Wakefield Rye,”  the brother’s flagship brand.   The embossing also reads “The Culpeper Liquor Company, VA.”

According to a newspaper report,  Griffin had been researching the origin and location of the business in Culpeper for two decades without any success.  My guess is that they operated a short-lived storefront from which the brothers sold their liquor.

As Lawrence Lowenbach matured he join Lowenbach Bros. in Alexandria.   City directories for several years in the 1910s listed him as a bookkeeper at the firm and boarding at 2226 S. Columbus Street.  When Virginia voted statewide Prohibition in 1916, Lowenbach Bros. was forced out of business.   After three generations in the whiskey trade,  members had to find new occupations.   The 1930 census recorded Charles and his wife, India, still living in Leesburg at 316 King Street.  Charles was working as the manager of a hardware store.  Other Lowenbachs lived next door, likely a nephew and his family. 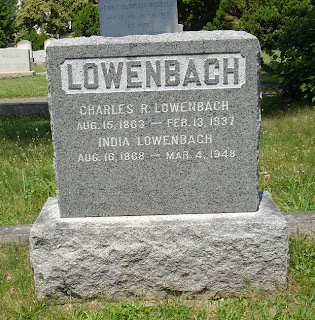 Charles died in 1937, followed by his wife in 1948.  The two are buried in Leesburg’s Union Cemetery where they occupy Plat B, Lot 638, Site 3.  Laurence Lowenbach, who died in 1944, is buried near them. No evidence exists that Lawrence  attempted to open a liquor dealership after Repeal in 1934.  Thus ended the Lowenbach dynasty that over three generations did whiskey business in two states and four towns.

Note:  The information for this article came from a variety of sources,  principally census records.   Photographs of Lowenbach bottles are through the courtesy of Dr. Richard Lillienthal.