Thomas O'Keefe and His Whiskey Pipeline

Thomas E. O’Keefe, a major liquor dealer from Oswego, New York, faced a problem plaguing many in his trade:  How could he insure a steady supply of good whiskey?  There he was, located in a small city perched on the eastern banks of Lake Ontario, 40 miles north of Syrause, more than 600 miles from the distilleries of Kentucky with their bountiful outputs of bourbon and rye.  His answer, while not unique, was significant. He prospered by investing at the source.

Born in 1842 in New York State of Irish immigrant parents,  O’Keefe shows up in the public record in 1869 when he opened a liquor dealership at 114-118 First Street in Oswego.  For the next 20 years he apparently struggled to assure supplies for his multiple brands. In 1892, for example,  Federal documents record him as having made a warehouse transaction from the Atherton Distillery, located in LaRue County, two miles south of New Haven, Kentucky.   But that same year liquor dealers in Pittsburgh, Detroit and other places were competing with him for that same distillery supply.

In 1889, after two decades of apparent frustration,  O’Keefe saw his opportunity.  Thomas S. Moore, a master distiller who had worked in the Mattingly & Moore distillery near Bardstown, Kentucky, was restless to strike out on his own.  O’Keefe provided him with the cash to purchase 116 adjoining acres just a half mile from town.  There the partners built the Tom Moore Distillery.  Pictured here, insurance records indicate that the still itself was housed in a frame construction with a metal roof.  Two warehouses were adjacent.  One was ironclad with a metal roof and located 150 feet south of the still and the other was frame with a composite roof, located 310 feet south of the still.

O’Keefe and Moore must have found their collaboration mutually beneficial.  About a year later when the Eagle Distillery located in Daviess County, Kentucky, came up for sale,  the partners bought it.  That facility, shown here, had been built in 1869 by a member of the Monarch distilling clan and had stayed in the family ever since.  Insurance records from 1892 indicate that the building where the still resided was brick with a metal roof.  That still supplied two bonded and three free warehouses,  all of them were of frame construction with shingle roofs.  One of the bonded warehouses was heated by a boiler located 100 feet south of the still.   A cattle barn was also part of the property, housing livestock to which the spent mash could be fed, a frequent feature of distilleries in that day. 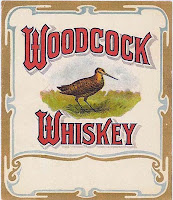 The Eagle Distillery was a much more developed property than their own at Bardstown. The cost to O’Keefe and his partner probably was in the neighborhood of $150,000, a substantial sum in those days and 20 times that in today’s dollar.  It gave the New Yorker an assured supply of whiskey for his multiple brands, including “Beaver Run Bourbon,  “Mont Eagle Rye,” “Hazlewood Rye,”  “Woodcock Bourbon,” “O’Keefe’s Pure Malt Whiskey,” “Chippewa,” “Oak Valley” and “Ontario.”

O’Keefe merchandised all these labels strongly not seeming to have had a “flagship” brand.   Some, like his Pure Malt Whiskey, he put in stoneware jugs underglazed with a decor very similar to Irish whiskey jugs like Cruiskeen Lawn. Others, like Woodcock Bourbon he bottled both in glass and ceramic.  His Woodcock label is particularly attractive for the simplicity of the wording and the color picture of the bird.

O’Keefe also was generous with his giveaways to favored customers, including saloons.  He seems to have  had a particular penchant for gifting shot 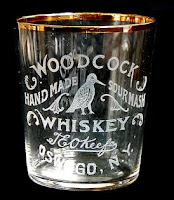 glasses, issuing them not only for Woodcock, Mont Eagle Rye and Beaver Run Whiskey, as shown here, but also for Oak Valley and Chippewa.   He also give away more expensive items, such as a celluloid and metal match safe with the image of the Tom 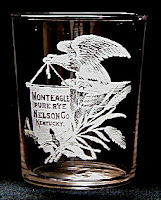 Moore distillery on it.  While many tip trays were mass produced and most were thin painted medal, O’Keefe’s was sold brass and advertised his Hazelwood Rye.

Note that both the match safe and tray identify T. O’Keefe as a distiller.  Unlike some whiskey men who claimed to be distillers but were not,  O’Keefe had a legitimate claim to that distinction through his co-ownership of two Kentucky distilleries.   He was able to sell whiskey excess to his needs to liquor dealers elsewhere.  A 1906 billhead records that he sold a barrel of whiskey (43.67 gallons) to C. S. Tallcott & Sons, a liquor dealer in the small New York town of Parish.  The cost was $65.51. 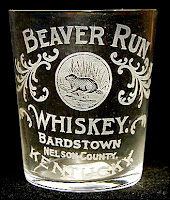 But O’Keefe would find that the owner’s role also had a downside.  In 1909 fire destroyed two of the three Bardstown warehouses with a loss of 14,000 barrels of whiskey.  Although some of the loss likely was covered by insurance and no other damage occurred,  his supplies must have been disrupted.  The warehouses were quickly rebuilt, again at some cost to him.

National Prohibition brought an end to all O’Keefe’s enterprises.  The Eagle distillery, name changed in 1908 to “Imperial Distillery,” was shut and the plant dismantled.   Moore and O’Keefe’s Bardstown whiskey operation terminated.  According to one writer,  all the whiskey that was not stolen subsequently from the Tom Moore warehouses was taken by Federal agents to “concentration houses” and all the equipment was salvaged.  After Repeal in 1934 Moore’s son rebuilt the distillery on the same property to a 2,400 bushel a day capacity.  O’Keefe was not involved.

Facts about Thomas O’Keefe’s personal life are scanty. The public record lists him in 1877 as having  been a member of the Oswego Board of Public Works Commissioners.  In 1888 he was among the incorporators and an investor in the Oswego Agricultural Fair Association, capitalized at $30,000.  O’Keefe appears never to have married.  The 1900 census, found him, age 58, listed as the head of the household living with his sister, Katherine Doyle, and her husband,  Patrick.   Two servant girls rounded out the household.   As information about his personal life is uncovered, I will add it here.  In the meantime we can remember him as the canny Irish whiskey man who built a personal “pipeline” for whiskey from Kentucky to New York. 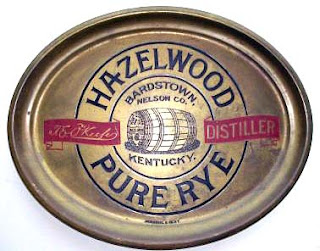